Vishwajyoti Ghosh curates a collection of graphic narratives that capture the layered history of Partition. 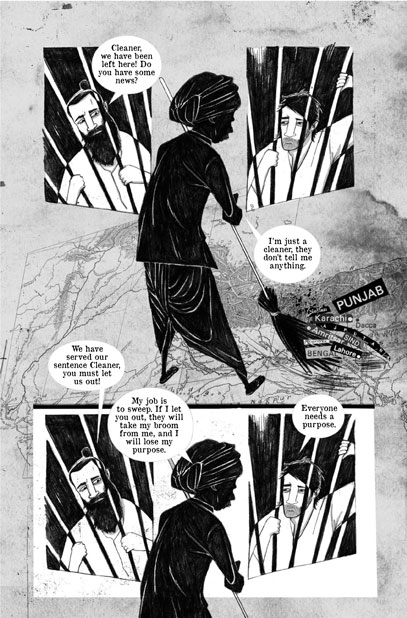 ‘This Side, That Side: Restorying Partition, Graphic narratives from Pakistan, India, Bangladesh’, curated by Vishwajyoti Gosh, Delhi: Yoda Press, 2013.

“Come to the house. Not the theatre,” he said on the phone. It was 1994. My granduncle, Inder Dass, and I had a regular lunch date at the Little Theatre near Mandi House in New Delhi. Why, I asked? It took some time for him to admit this to me, but he had become addicted to Oprah’s show. It ran around lunchtime. “She makes people say things I don’t allow myself to think,” he said once in a moment of weakness.

My granduncle and I shared a love for stories. He liked to tell me about his youth and about his early days as a playwright. We often discussed one of his favorite plays, the last he did in Lahore in the waning days of its cosmopolitan colonial glory – Society ke Thekedar, the ‘Contractors of Society’ (1946). Angry at the countdown to Partition, Inder Dass decided to skewer the political leadership. They were going to sell out his world, compel him to leave what he knew and loved. He reconstructed the play for me so many times I feel that I might even be able to write it down. I’m not sure if there is a copy of the play anywhere, but that became beside the point.

Everything changed the day that Inder Dass talked about his brother. We come from a large Punjabi family, where all the aunts and uncles are not only accounted for but so are their progeny and wider families. Now he sprang upon me another uncle. Sometime in 1946, as Inder Dass was working on his play, his younger brother failed his school exams. Foreboding was the ethic of the land, and concentration on studies could not have been easy. The brother had a nervous breakdown. He hid in his room.

Months later, Inder Dass was sent by his family to secure a truck to carry what belongings and family it would hold. A resourceful man, he loaded the vehicle he had found with things and people. Before they were to leave, the brother refused a final entreaty to depart from his room. The truck left shortly afterwards. Inder Dass, tears in his eyes, was not sure if his brother watched his family drive away from his window. “Did he see us crying,” Inder Dass asked me, crying as he said so.

Partition stories are so common in northern and eastern India, in Pakistan and in Bangladesh that one can be forgiven for thinking that everyone has one. In Pakistan, Partition even spawned what sometimes seems like a new ethnic category – mujahir, the migrant, with the full weight of Islamic history on the term that refers to the migration of Muslims from Mecca to Madina (also known as the hijra). This Quranic flight was against betrayal and death. It is a good analogy for Partition. So much of its story is bedeviled with sadness and carnage. The Islamic calendar begins with this migration. It sometimes seems as if India and Pakistan’s calendar also begins then (Bangladesh had its second partition in 1971). “Freedom was very near, very far,” sang the young Amrita Pritam as independence from British rule came alongside the immense violence of Partition.

The emotional history of Partition remained buried for 50 years. Only in fiction was it allowed some license. Between Amrita Pritam’s Pinjar (1956) and Rahi Masoom Raza’s Aadha Gaon (1966), between Saadat Hasan Manto’s short stories and Intizar Hussain’s Basti (1979), lay a hundred other stories. Films, songs, poems and novels carried the emotional weight of Partition, a catastrophe for millions of people in the Subcontinent. Memoirs flooded the market but were often too painful and raw to be taken seriously. When Mumtaz Mufti’s Ali Pur Ka Aeeli (1961) was published, critics felt that the memoir was a novel. It was not easy to be honest about the brutality. Countries do not like to be born in dishonourable circumstances. Partition was not a war of independence. Amrita Pritam’s vision of it as a haemorrhaged birth is as accurate as it gets.

By the 1980s, with a more mature and confident set of countries, the question of Partition was much easier to address. Historians had already made the revisionist turn, questioning the motives that led to Partition in the first place. Ayesha Jalal’s The Sole Spokesman (1985) questioned the mythography of Pakistan’s birth, showing how Mohammad Ali Jinnah’s claim to be the principal leader of the Subcontinent’s Muslims was exaggerated. Historians and social scientists began to turn from the world of high politics, where much of the literature on Partition buried itself, to its human consequences – to a social history of Partition. It is here that Urvashi Butalia’s pathbreaking The Other Side of Silence (1998) shone. Butalia’s oral history developed themes for the historical imagination that had been fleetingly visible in fiction – “how families were divided, how friendships endured across borders, how people coped with the trauma, how they rebuilt their lives, what resources, both physical and mental, they drew upon, how their experience of dislocation and trauma shaped their lives, and indeed the cities and towns and villages they settled in.” Most oral histories that followed filled in the outline map that Butalia drew.

Most of the stories in This Side, That Side continue that project. Ghosh has collected sharp writers and skillful illustrators to bring to life the emotional landscape of Partition – the stories of division, of endurance and of trauma. There are some straightforward stories and others that are oblique, even shards of poetry to carry emotions where narratives are not available. Some of the former – straightforward stories – are playful, such as Ahmad Rafay Alam and Martand Khosla’s story of their friendship, and then the story of the lineages that draw them back to the past. The latter – oblique stories – are hard to do. The form easily makes the words seem hackneyed. But there are some gems here, such as Priya Sen’s magical ‘The Last Circus’ and Mahmood Farooqui’s clever adaptation of Intizar Hussain’s Hindustan se Ek Khat. Sen’s contribution retells the story of Bangalore-based Dashrath Singh – whose Lahori traveling circus has to cross its own borders. His parents are from Manila and he crossed the border into India on an elephant. There is no need for Manto here.

Each contribution is short, which is what allows the author-illustrators to take risks with the form and content. Some of the more poetic contributions would not last beyond the four or five pages that they take up. The graphic form is not unfamiliar with the short contribution. After all, modern comics came to us in magazines and newspapers as the Strip – although these were often one-off jokes or part of a longer sequence that was to continue the next day or the next month. The cartoon was an epiphany, the caption often at variance with the image. Over the past decades, the graphic novel has come to establish itself as a self-contained intervention into the world of arts and letters (Ghosh’s own Delhi Calm, reviewed by this writer in Himal, October 2010, is one example of the mature form). But the graphic short story is a less developed form. The Pao Collective’s anthology from 2012 provides engaging examples of short-form graphic fiction. Ghosh’s contribution to that anthology ‘RSVP’ is a tremendous satire of the arts industry with its grants and grimaces for aspiring artists who become dependencies of the Western funders (lovely irony that this book is funded by the Goethe Institute).

Short form allows for the distillation of emotion rather than a drawing out of the story. Here the emotions carry the reader, not the narrative, which is anyway truncated. Many of these stories are well-known. Far better to have the epiphany than be dragged through the details over and over again. But there are some stories that are less known and demand a longer treatment. One such is Khademul Islam’s ‘The Exit Plan’, a memoir of newly minted Bangladeshis trying to escape from Pakistan to their new homeland in 1971 via Afghanistan. This is a part of author Islam’s much longer project. It is a good thing that Sarbajit Sen decided to draw the story like a standard adventure comic book – a 21st century Black Diamond Indrajit Roy. The story is fascinating. After this experience, the reader can hope he decides to work with Sen for the rest of the book.

The literature on Partition is disjointed. There is the emotional register of fiction, a rhetorical pleasure in its own archives existing in the imagination that are formed by a relationship between shards of memory and the selections of official history. There is the great drum beat of official history which is obliged to create seamlessness where there is none, and to offer justifications for a tainted state (in critiquing this “official history”, Gyan Pandey’s 2001 Remembering Partition is at its best). Archives are not always easy to access in writing revisionist history, nor are the clichés of memory easy to unravel for the truths that oral historians seek. The graphic form can play effortlessly with the archival impulse.

Sarnath Banerjee, not included in this book, has mastered the use of the ‘archive’ as a character in his work – this was so in The Harappa Files and in his contribution to the Pao anthology (both reviewed by this writer in Himal, November 2012). ‘Documents from Important Offices’ make their way into the story, lavishly illustrated, to turn the page into an illuminated, medieval manuscript – there are times when his work seems as if he has taken an old book and drawn in its margins. Ankur Ahuja’s ‘The Red Ledger’ is along the same grain. It is a story of a grandfather and his ledgers, in which he calculates in red ink the precise accounts of his commercial life in bewildering Delhi; in Urdu he scrawls numbers, perhaps to blind the pain of his emotional history, the loss of his sister abducted on their journey from Bahawalpur (she was later to return). “After he died, all his red ledgers were sold to the kabaadi (recyclers). All that remains of him is a certificate from the Ministry of Relief and Rehabilitation that confirmed his status – a refugee.” Nina Sabnani’s illustrations are another kind of archive – somewhere between a Warli painting and a Hmong tapestry, a childlike view of terrible atrocities, holding the emotions not in the words but in the images. If the archive is unwilling to open itself, the illustrator will draw it.

Vishwajyoti Ghosh knows his comics. He selects and uses them well. The short form is a new kind of aesthetic that will take readers some time to get used to. How is one to read this? Like a book of short stories? Like an art magazine? There is no easy suggestion. I first read it like a novel, from start to finish. Then I decided to use it as a book of poems – open randomly, read, allow myself to bathe in its emotions. Either way, or in any other way, it is likely that this book will give you pleasure, and nightmares.