Skip to content
Culture > People and Homes of Aligarh

People and Homes of Aligarh

“Material culture is the history and philosophy of objects and the myriad relationships between people and things.” Bernard Herman, material culture scholar. 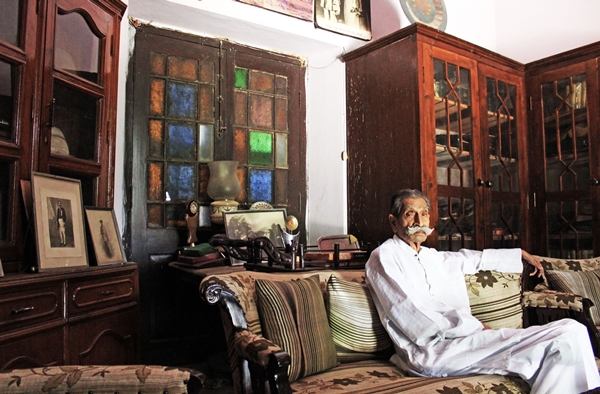 I have always had a fascination with old homes. I grew up in one – Abid Manzil in Aligarh, built in 1935. Well-known as the home of Aligarh Muslim University, the town in western Uttar Pradesh saw many Indian Muslims migrate there in the early 1900s from different parts of the erstwhile United Provinces. This included the Muslim zamindar elites who came from neighbouring principalities as well as working-class and middle-class families from eastern Uttar Pradesh. Many wanted to give their children the chance of a good education at the university. These people brought their cultures and histories with them, blending with the Islamic yet liberal intellectual philosophy propagated by AMU and spearheaded by its founder, Sir Syed Ahmed Khan. The homes of these people, mostly built in the 1930s, are evidence of this syncretic tradition.

On my most recent visit to Aligarh I realised that these pre-Partition houses were gradually disappearing. I met with some of the remaining families, who wanted to talk about the rich history of their homes, the culture and ways of life they embodied, and the measures they were currently taking to secure a future for their homes and themselves. This photo essay tells the story of these homes and the people who live in them.

Ibne Sahab was born in 1923. He lost his mother when he was just a month old and was raised by his father. Ibne Sahab’s childhood was spent in Chattari and he moved to Aligarh to pursue his formal education when he was 15 years old. He studied Persian and Psychology at Mohammedan Anglo Oriental College. 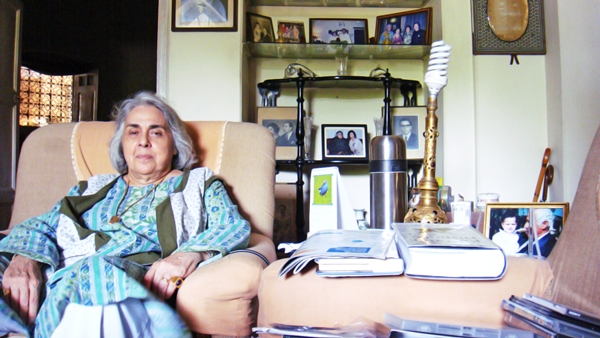 Sir Syed Ahmed Khan, the founder of Aligarh Muslim University (AMU) was Scheherazade Alim’s paternal great, great-grandfather. She spent her childhood in Aftab Manzil, named after her maternal great-grandfather Aftab Ahmed Khan, who built the house in 1904. Scheherazade Begum studied law at Oxford and became a barrister and has taught law at AMU. After two decades of living and working in Dubai, Scheherazade Begum and her husband Abdul Alim Khan returned to Aligarh and to Aftab Manzil in 1997, and have lived there since. 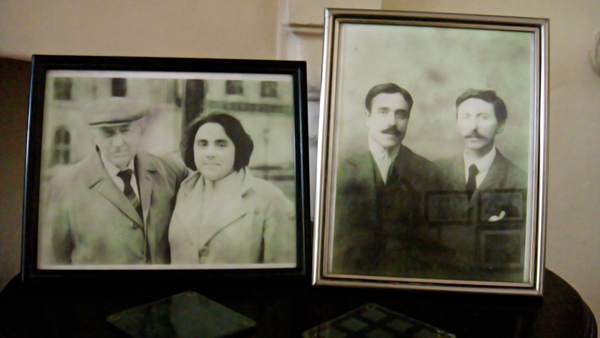 Aftab Manzil saw the comings and goings of influential men and women. One of them was E M Forster. Scheherazade Alim’s grandfather Sir Ross Masood was a close friend of the writer, who dedicated A Passage to India to him. Masood became the Vice Chancellor of AMU in 1929, a position he held for three years. The photograph on the right was taken in Italy in 1911. The photograph on the left shows Scheherazade Begum with Forster. It was taken in England in 1962. She herself cultivated a deep bond with the writer, calling him “Forster Chacha”. 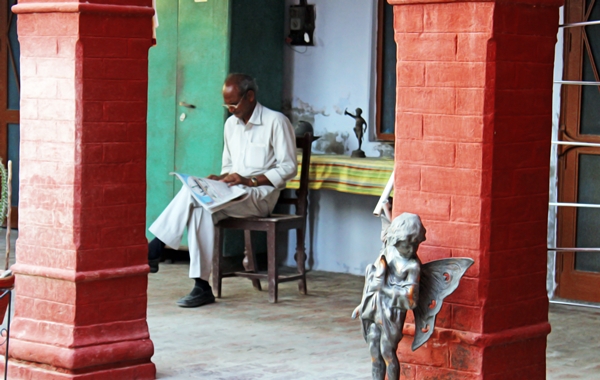 Aftab Manzil was built using bricks manufactured by Ford and MacDonald, the company responsible for supplying red bricks for the building of AMU. Other homes such as Habibullah Manzil were also constructed using surplus material from AMU. Courtyards like this, at Habibullah Manzil, are typical features in old homes. They are public spaces that allow family members to socialise, yet at the same time are private and separated from the outside world. 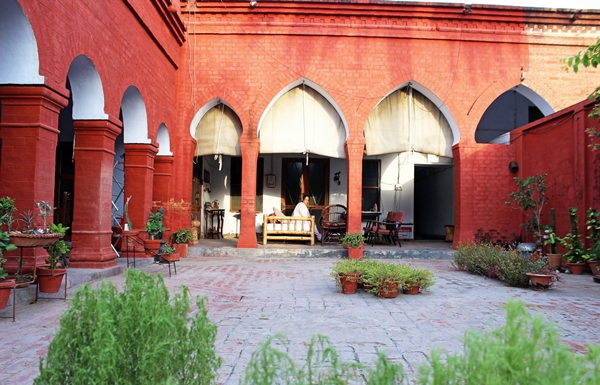 Professor Tariq Gilani, who lives in Habibullah Manzil, says that it is difficult to secure an old house, especially since there is no one, single uninterrupted wall, each room having several doors. David Lelyveld, in Aligarh’s First Generation, explains that this was the case “so that different sorts of people might come and go without crossing paths.” The architecture, therefore, reflected the norms of social interaction in the early 20th century.

These norms dictated that spaces within a household be separated on the basis of gender. Purdah was adhered to, especially among the elite. To enter the ladies’ quarter, or zenanah, male servants and visitors had to announce themselves first. In the case of Rahat Manzil’s haveli, non-related males would have entered through a zigzag corridor, preventing them from directly viewing the zenanah. 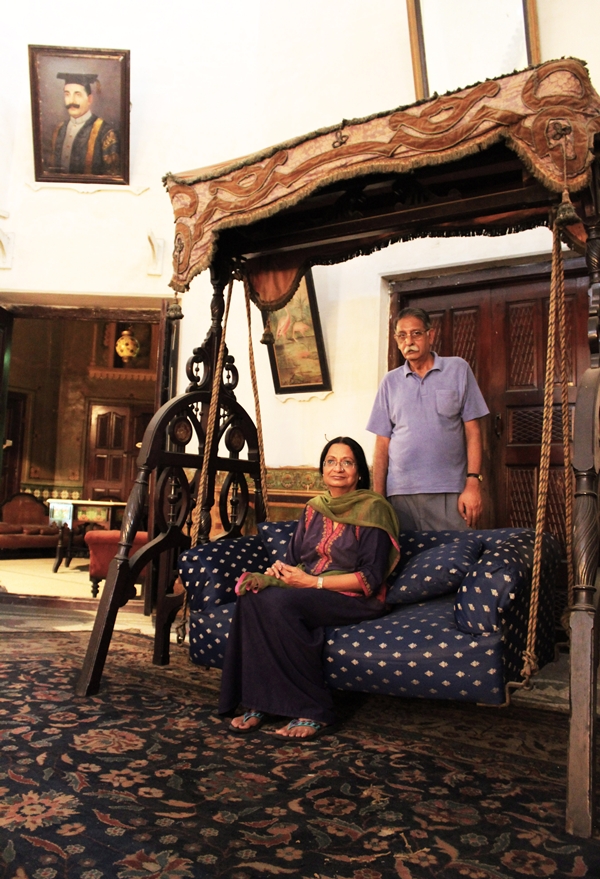 Farrukh Said Khan with his wife Faizana Said Khan in their formal living room in Rahat Manzil. Faizana Said Khan is the great, great-granddaughter of the Nawab of Jaipalguri. The swing is about ninety years old. The photograph of Ahmed Said Khan on the wall is from when he received an honorary doctorate from AMU. Farrukh Sahab recounts that his grandfather, Ahmed Said, was born in 1889. He was an orphan. His parents died in Saudi Arabia in the early 1890s. After the Sepoy Mutiny of 1857, Mahmud Ali was unwilling to stay under British rule. But when his son (Ahmed Said’s father) and daughter-in-law died, he had to return to take care of his grandson. Ahmed Said was eight years old when his grandfather passed away. He was sent to English House (AMU’s old guest house) by the British, who had taken control of Chhatari – Ahmed Said’s ancestral zamindari. When he turned 21, Ahmed Said was made the Nawab of Chhatari. He built Rahat Manzil in 1920 as a guesthouse to accommodate his family when they travelled to Aligarh from Chhatari. 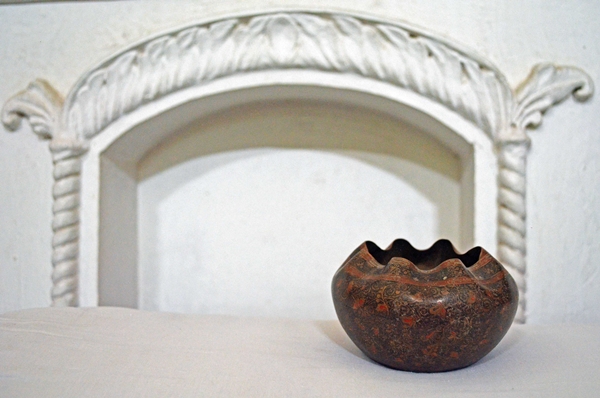 Raja Masudul Hasan, also known as the Raja of Asgharabad, supervised the building of Hasan Manzil. He was a keen collector, and according to Zafar Sahab (his son and current owner of Hasan Manzil), he bought this copper ashtray from Chinese traders who frequented Aligarh in the 1930s. He moved to Aligarh in 1925 from Asgharabad, where he was a zamindar, and died in 1954. 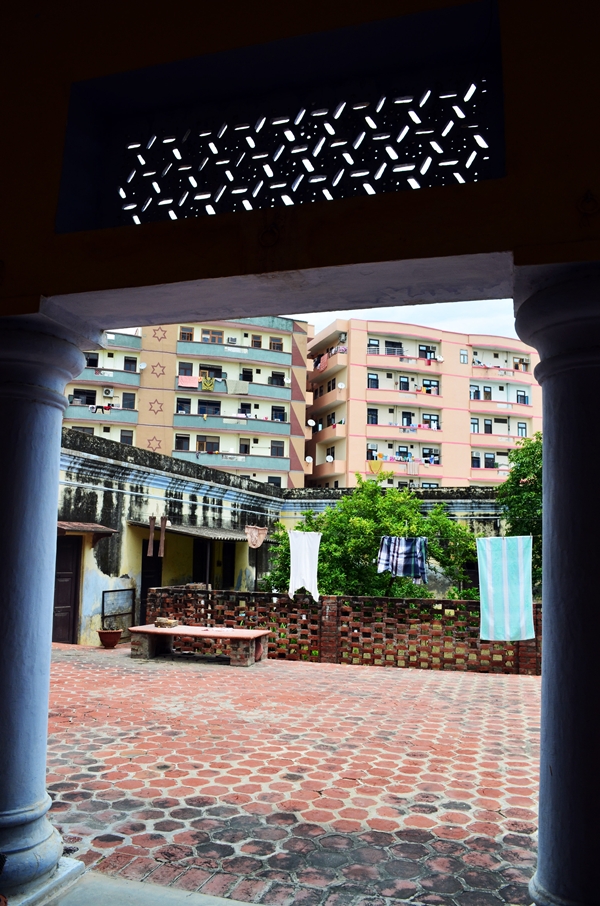 Over the years, the landscape of Aligarh has undergone dramatic changes. Where there were once independent bungalows and havelis surrounded by orchards, now stand three or four storey apartment buildings. Many more people have migrated to Aligarh in search of education or employment. This changed landscape, although inevitable and positive in some ways, has imposed stress upon those who live in old homes in Aligarh. Some are uncertain about what will happen to their homes after they are gone. Will their children come back and take charge of things or will their homes, like many others, be broken down and apartment buildings erected in their place?

People have coped with these challenges in different ways. Ibne Said Khan has transformed Rahat Manzil’s formal dining room into a museum dedicated to the life and career of his father, statesman Ahmed Said Khan. He says that one winter evening, after his father’s death in 1982, he saw that his servant was bringing bundles of old paper to feed the angethi (brazier). He asked the servant where he was getting these papers and discovered stacks of old documents and photographs in the storage area. He rescued these and set to work, chronologically organising documents and photographs that captured the breadth of his father’s work. With more than a hundred photographs and documents mounted in the main dining area, Ibne Sahab says that there are still many photographs and documents to be sorted and incorporated into this museum.

The Sherwanis of Muzammil Manzil have renovated a section of their house and transformed it into a school, which they run. Blossoms started in 2001 in a rented house and later shifted to Muzammil Manzil. What was once an aangan (courtyard) is now a school playground. The school has over 800 students. 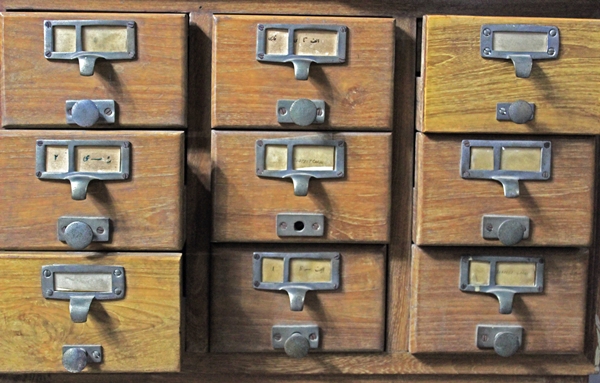 The Sherwanis also maintain a library in one section of their house named after Syed Sherwani’s grandfather and the original owner of Muzammil Manzil – Nawab Muzammil Ullah Khan. The library started with 500 books but Sherwani Sahab’s father, Rahmatullah Khan Sherwani, expanded it over four decades. It now holds 16,000 books and 2400 rare manuscripts. 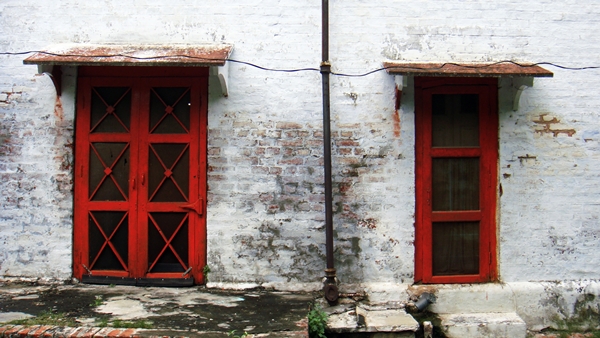 This door was hand painted by Rashid Sahab’s nephews. Like Zafar Sahab, Rashid Sahab says that the family has inculcated a sense of responsibility in the next generation to take care of Saman Zaar. For the future, he adds, “We should try to come back to this place and live together (as a family).”

~ Meher Ali is a freelance journalist from Aligarh. She is currently based in Ahmedabad.