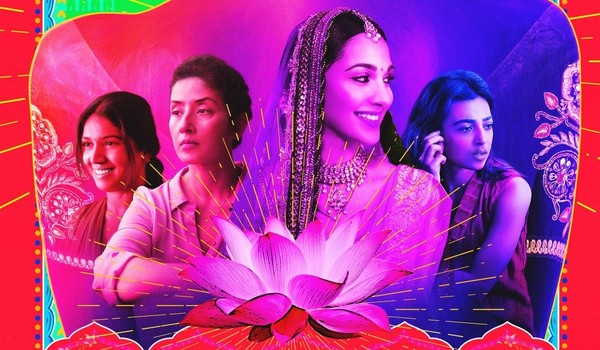 Lust Stories is a recent anthology-film, released globally by Netflix India on 15 June 2018. The film has four segments, directed by Anurag Kashyap, Zoya Akhtar, Dibakar Banerjee and Karan Johar, respectively. Each of the stories purports to explore women’s sexuality and desires, and the film is being upheld by various critics as ‘ground-breaking’, ‘radical’ or even a ‘brave new’ portrayal of women’s sexuality – something that is rarely seen on screen in India. It is true that women characters hardly seem to express their desires, let alone sexual desires, in most films produced in the country’s mainstream film industries. But the portrayal of love, lust and desire in the film anthology is deeply rooted in the conscious and sub-conscious misogyny prevalent in Indian society.

Last year was a momentous period in the fight for women’s rights and equality. The #MeToo movement, followed by the #TimesUp campaign, helped bring into focus truths about patriarchal oppression which have become a quotidian experience in the lives of women. Thousands of women across the world sharing #MeToo on their social media pages showed the world that sexual harassment is not a minor issue and is not limited to corporate, academic or entertainment institutions. One in three women worldwide have experienced either physical and/or sexual violence from their intimate partner or non-partner in their lifetime. One would expect films on the stories of women’s sexuality and desires being released in the wake of such a movement to take into account the issues of power and patriarchy. Unfortunately, this anthology manages to bypass this momentous shift in consciousness.

The first film of the anthology, directed by Anurag Kashyap, revolves around Kalindi, portrayed as an independent  woman with sexual desires. Kalindi, played by Radhika Apte, is an anxious, independent yet possessive professor who is on a sexual adventure. She develops a physical relationship with her student, Tejas, played by Akash Thosar, and later, a male colleague. But her so-called feminism ends there; Kalindi is also portrayed as a woman who is deeply insecure, vulnerable and in doubt about her sexuality. Even Tejas, who is much younger than her, seems to be more composed and in control of his sexuality compared to Kalindi. While both of them seem to enjoy their sexual encounter, it is she who is unsure and fears being exposed. Struggling with her fears of being exposed in front of the college authorities by a student, she tries to confirm the student’s age and ‘secure’ his consent after they have had sex. Consent is, of course, complicated. But in the narrative, an intelligent, independent working woman is shown as being incapable of handling her sex life, and always in need of help from a man, even one much less experienced than her.

In one scene, the background conversation about sexual consent in the staff room of the college is deeply disturbing. In what appears to be a discussion on issues brought up by #MeToo, we hear a male voice say, “Kya proof hai ki kiya hoga. Aise toh koi bhi ilzaam laga dega?; What is the proof that he has done it? Anyone can be accused in this fashion?” At a time when the #MeToo movement has gathered some currency – asserting women’s perspectives and exposing how systemic patriarchy makes it extremely difficult for women to come out in open against the sexual harassment they face – this conversation seems irresponsible and full of turpitude. Meanwhile, Tejas goes on to nonchalantly state that he cannot even pronounce ‘consensual’ and is totally oblivious to the concept. In a world where it so difficult to make men understand consent and respect it, this seems to justify his stand and sidelines any serious conversation about consent by resorting to banal and conservative humour. The audience, at this point, develops a certain soft spot for Tejas and an irritation towards Kalindi, who is desperately trying to get a recorded testimony from him to prove that their sexual contact was mutual and consensual. Depressingly enough, Kalindi is also stuck in the past. She talks about her husband Mihir in her soliloquies that are interspersed within the narrative. She clearly marvels at his composure and control, as well as his maverick instincts, while exploring his desires – as if a woman has to constantly rely on the experiences of men in order to explore her sexuality.

In the next segment of the anthology, director Zoya Akhtar introduces us to Sudha, played by Bhumi Pednekar. Sudha is a domestic worker in a middle-class household, where she cleans, washes, cooks and also provides for the sexual needs of her employer, a young bachelor living alone in Mumbai. Sudha, unlike Kalindi, is in control of her body and emotions. She is also someone who, while providing sex, seems to be enjoying it. She holds on to her demeanour but gives away her hurt feelings when the man she has had a physical relationship with is courting his prospective fiancée. Disconcertingly, gender, class, and caste inequities appear to be both accepted and adhered to without any protest. Sudha’s sex with her employer seems to be consensual, but consent has to be understood within the context of relationships of power. We might ask how much agency does Sudha have to exercise her free will to consent in a situation where she is completely financially dependent on her employer.

Directed by Dipankar Banerjee, the third story, while handing the subject of infidelity, delves into a back-story of two friends – the husband and the lover of a woman. Again it is two men, who sit and ‘handle’ the situation in their own ways without violent or emotional outbursts. It is Reena, played by Manisha Koirala, who is vulnerable and emotionally unstable. The possessiveness of the husband is the one trait that allows him to be vulnerable, as is the other man’s commitment towards his friend. The story ends without a satisfying solution: we see Reena get into the car with her husband – a strong statement about the limited ‘choice’ women have, even on screen.

At the heart of these lust stories are ambivalent emotions, possessiveness, separation anxiety and, of course, humour. The stories cynically manipulate the ambiguity produced by their prescribed plots to camouflage their misogyny. If the intention is to portray Indian women’s varied experiences through their sexualities and desires then there is still a long way to go.

Bollywood directors need to look at women’s sexualities as independent, self-asserting and defiant entities capable of subverting patriarchy on screen. Though pervasive clichéd and stereotypical images of womanhood are giving way to more rounded women characters, these representations have not been able to challenge patriarchy.

In a film industry riven by everyday misogyny, not only in its representations but also its structures, it is important that directors who claim to centre women characters in their narratives consider the politics of gender embedded in their lenses – how their scripts are reproducing rather than challenging conservative gender ideologies and tropes. Lust Stories ultimately reveals the directors’ inadequate understanding of questions of power and politics when it comes to sexuality.

Rutuja Deshmukh is an independent journalist and features writer based out of Pune and Bhopal. She writes on cinema, gender, caste, denotified tribes, and culture at the intersection of neoliberalism. She is also a visiting faculty at FLAME University, Pune. She tweets at @rut28.