Meena Menon’s book does Mumbai a service, recording personal accounts of the Mumbai riots, and showing us what they mean for the city today. 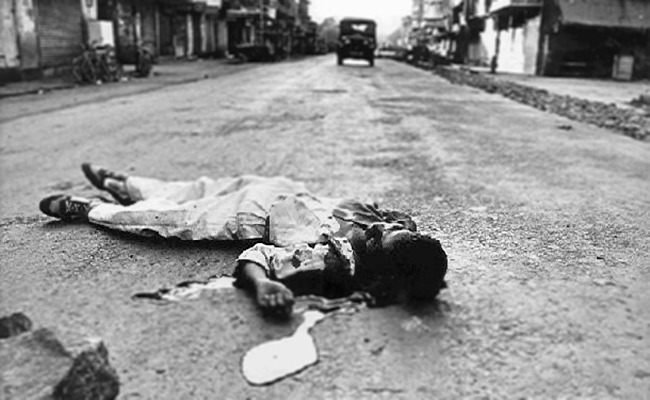 There are several things I wish I did not remember of the Bombay riots of 1992-93. One of them is that during those tumultuous days, my family’s nameplate disappeared from the board in the foyer listing the families who lived in our South Mumbai building. It was probably removed by the building society or secretary, as was the case in many other Mumbai buildings with Muslim families at the time. To the day my parents left that house almost eight years later, our nameplate did not reappear on that board.

The fact that our names never went back up on the board has always upset me more than their quick removal during the riots. At the time, it had seemed a pragmatic move. But its continued absence even years after the violence – during which my family had to swiftly relocate, carrying only a ration card and a few clothes – became a painful reminder that as the only Muslim family in the building, we had been ‘othered’, and our religious identity now overshadowed all our other qualifications. Our house was no longer our home and our city had changed forever.

Journalist Meena Menon’s insightful book Riots and After in Mumbai brings back many memories that I wish could have remained buried. Most Mumbai Muslims carry the scars of 1992-93 riots, if not on their bodies then certainly in their hearts and minds. These are scars of deep hurt and resignation, of immeasurable sadness and nostalgia. For many of us, the riots were and continue to be the most significant event in our lives.

As Menon notes in her book, the seemingly healed city has not really healed, but has just reconciled itself to things as they are. The truth of what happened in 1992-93 has not been acknowledged – the Srikrishna Commission report that investigated the riots and the bomb blasts that followed has not been accepted by the government, nor have its recommendations been acted upon. No real justice has been served – not a single person or political party to date has been punished or even reprimanded for their role in the riots.

No wonder then, that Menon’s painstaking labour of love – which puts on record the events of that dreadful winter and also investigates what happened to those affected in the years that followed – was initially met with scepticism and hostility. Some asked why Menon wanted to make them remember things that they would rather not. It is a credit to Menon’s tenacity that she looked beyond the limits of daily news stories like those she had filed during the riots and managed to document an amazing array of personal interviews with both Muslim and Hindu riot survivors from across the city.

In addition, the author combs archival records and revisits previous scholarship to present a fairly substantive history of Mumbai and Hindu-Muslims riots. Starting with the first recorded Hindu-Muslim riot of 1893 – which had roots in the cow protection movement that demanded an end to the slaughter of cows in the British Raj – Menon systematically sums up the pre-independence riots of 1929, 1932, 1936, 1937-38, 1941 and 1945. Then, she considers some more recent riots, particularly those in Jogeshwari and Bhiwandi.

While the trigger in each riot was different and often seemingly innocuous, Menon’s analysis of these historical events concludes that generally there is “nothing spontaneous about riots in this country or the events leading up to [them].” Menon then briefly examines the violent history of the Shiv Sena and its transformation from a social-work oriented, pro-Marathi party to a mainstream Hindutva party that portrays itself as the “defender of the [Hindu] faith,” out to “save Mumbai from the Muslim hordes”.

However, the best chapters are those where Menon the journalist interviews, in great depth, survivors in Jogeshwari, Mira road, Naupada, Behrampada, Bainganwadi, Antop Hill, Malad, Ghatkopar, Thakurdwar and several other Mumbai neighbourhoods which witnessed brutal riots. Their stories are told simply, with few journalistic embellishments (which is a relief), and mostly speak for themselves. Several of them are full of pathos and sadness, longing and despair, some filled with bitterness, almost none with any desire for revenge. Many of the interviews are very moving, and I often found myself trying to hold back tears.

Once such instance is the story of 75-year-old Majid, who cherished his life in a mixed community but lost his business and home in Bandra East during the riots and was forced to move to the far-flung Muslim ghetto of Naya Nagar (Mira road). “Ekdam dil tut gaya,” Majid says – “My heart broke.” Or when Naupada resident Razia Sheikh talks about the effect that witnessing the riots had on her children: her son Jabbar went mad and is still at a local psychiatric hospital, and her daughter Firoza, who developed a psychosis, suddenly collapsed and died just days before she was to get married.

One of the common threads that emerge from Menon’s interviews is the overwhelming mental trauma and depression among riot victims, which, with no medical aid or psychological counselling for affected families, has not been adequately addressed.

The other theme cutting across the stories of both Hindu and Muslim survivors is that most of them, particularly those who lived in mixed neighbourhoods at the time of the riots, have moved from their original homes and sought refuge in areas populated only by their own co-religionists. Areas such as Behrampada, Jogeshwari, Naya Nagar and Mumbra have proved popular with Muslims. But interestingly, though they acknowledge that the move was motivated purely by concerns over physical safety, many of the Muslims who moved to Muslim ghettos are not too happy about that choice. Ideally they would have preferred to remain in mixed areas, but often did not have the chance to do so. In fact, more and more Muslims in Mumbai find it difficult to buy or rent housing or even commercial property in heterogeneous areas.

Why do they prefer mixed areas? Menon does not answer this question, but other research – the PUKAR Gender and Space project concluded in 2006, for instance – suggests that while living with one’s own community provides safety in times of rioting, in everyday life it often means following more strictly the community’s prescribed codes of conduct. For women in particular, this implies more severe policing of their movements, dress, and behaviour. Partly as a result of this, many Muslims would prefer to live in heterogeneous neighbourhoods so long as their physical safety is assured.

Menon provides a remarkable portrait of several localities in the city, but her ethnography of the deeply polarised suburb of Jogeshwari, where the distance between Hindus and Muslims has grown substantially with each riot, is particularly good. So is her portrait of Naya Nagar, a Muslim ghetto in Mira road. In both these areas, people constantly refer to the ‘border’, which is often just a road that separates the Hindu and Muslim neighbourhoods.

The interviews in the book also illustrate quite vividly that in most cases the riot victims and their families received hardly any support from the government, or even from their own larger communities. They were not compensated adequately for loss of livelihood, and were provided a mere INR 5000 for loss of property. If some of them have managed to build new lives for themselves, its thanks to their own resilience, hard work and luck. But this has often spawned bitterness against the state and the political parties who initially flocked to help. Such is the case of the Bane family, whose parents were burnt alive in the famed Gandhi chawl in Jogeshwari. Menon traces and interviews Naina – the daughter who suffered burns over 50 percent of her body – and her brother Sudarshan, both of whom were neglected by the same right-wing Hindu political parties that used cases such as theirs to justify torching other parts of the city in January 1993.

Menon’s book also discusses how Mumbai’s class and community relations have changed dramatically, and how its famed cosmopolitanism – if it ever existed at all – is now a thing of the past. Muslims as a community increasingly feel alienated from the city’s social, cultural and political fabric, and find it very difficult to fight back from the margins. As one of her interviewees tells Menon, “Conflict and marginalisation is one thing, but in peace time marginalisation is much worse. It happens quite normally and is not seen as an aberration… [and so] it’s quite difficult to fight.”

Eventually what riot-survivors look for is justice, a way to build homes and earn livelihoods with a little bit of dignity. They don’t want you to remember the details of their suffering, but they would like some sort of acknowledgement that the events that turned their lives upside down and changed them forever are not forgotten, only to be repeated again.

Meena Menon’s book is one such desired record of memory, not just of individuals and families, but of the city itself. It tells us why we need to remember history, push for justice, and why journalists sometimes need to revisit their stories even after they are put to bed.