Winner of the first prize in the Online-istan fiction competition. 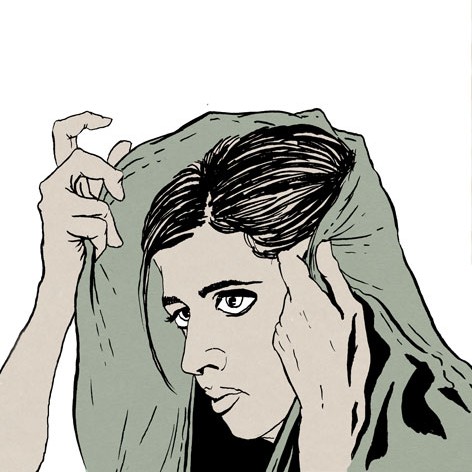 She read the lines again: “I think it would be best to stop sending messages. It has been good to reconnect with you after all these years, but our lives have moved on and thankfully things are good for you as well as for me. Let us just leave it at that.”

A whistle shattered the silence of the house, jerking Reema’s eyes away from the screen of her laptop. She jumped and dashed to the kitchen. Was it the fourth whistle or the fifth? She had lost count. As she turned off the flame, she decided to not to open the lid of the pressure cooker. Better to let the heat simmer inside.

The rice was ready and so was the curry. She had made the raita too. Only the salad remained now. She looked at the clock – half an hour for Rahim to return from the mosque. Rehna too would be back from her classes by then.

The jasmine trellis framing her kitchen window shifted restlessly, as though trying to take shelter from the hot wind romping outside.

What did he mean by that? He had been as eager to talk as she had been. She was sure of it. And fancy getting in touch after how long … almost a quarter of a century … surely that meant something.

The soft draft from the air-conditioning vent cooled the sweat on her brow and neck. But the harsh glare outside seemed to be burning a hole right through the walls.

Just then, the phone purred to life. She went over and picked it up. Who was calling at this time of the day?

“Assalamualaikum … Rayan? Why are you calling now? Why aren’t you at the mosque? It’s Friday today.

“Ohh, yes I forgot, you are two and half hours ahead there. Ok, so you went for your prayers, didn’t you?

“Good, how is college? You are not having classes now?

“Oh ok. Here we are okay. Uppa has gone to the mosque and your sister has gone for Quran class, they’ll be back soon. Have you had lunch yet?

“News here? Hmm, this new house we moved into after uppa’s promotion is really good. It’s a villa inside a gated township as you already know. There are parks and trees lining the roads, you won’t feel as though you are in a desert, and there are birds flying around – sparrows, pigeons, mynahs…

“Yes, Rehna is very excited. She is waiting to come and show you around.

“She is doing okay. You know your sister, still needs to be told to study.

“Yes my Quran classes are going on fine. We had the test last month, this time I got only 95.

“Ha, the highest was only 98. Next time you see, I’ll be the topper. I’ll regain my place.

“You study well too. Don’t slack off just because it’s the first year.

“Okay then, take care. Don’t forget to do your prayers. Salam.”

She put the phone down with a smile; two more weeks for her son’s holidays to start. She couldn’t wait for him to come home. She looked at the clock. Almost time for Rahim to come home and she hadn’t made the salad yet.

She took out some onions, lettuce, corn, tomatoes. She had just picked up the onion when she heard a car door closing shut. Rahim was back. She wiped her hands and went out of the kitchen. She paused at the washbasin and, looking at the mirror, adjusted her scarf. Though it was a Friday, there was a chance Rahim would have dropped in at his office. Sometimes the driver would come in with Rahim’s files. She couldn’t take that chance of being uncovered in front of a strange man.

“Walaikum salam. How was prayers, what was the sermon about?”

“It was about intentions and actions, about inner jihad.”

“I’ll tell you all about it during lunch. Why don’t you lay the table – I’ll wash my face and come. It’s so hot outside.”

“I saw the van turning into the lane, she’ll be here soon,” Rahim called out as he walked away.

“Madam, saab’s bag.” It was the driver. She was right, her husband had dropped in at the office.

“Keep it on the sofa,” she said without turning to face him. Only after she heard him close the door shut did she turn around. She looked at the bag on the sofa. Rahim could take it inside himself. She walked to the kitchen. The salad was still unmade.

Reema tore the skin off the onion and sliced one-half of it into thin strips, just the way Rahim liked it. She reached for the other half and slapped it on the board. This time the strips were thicker, but she did not bother.

Best for whom? After all, what harm was there in just keeping touch? What was wrong in old friends catching up? Anyway, they chatted only late at night, when everyone was asleep. Neither of their families was affected. Surely everyone had the right to spend their personal time the way they wanted? Maybe he was just pulling her leg by saying that she shouldn’t send any more messages. They were famous, that gang of friends, for their total irreverence. Of course, that was it, he was playing hard to get.

She would go along with his game. She would keep quiet for sometime. Then she would send a message when her son came home for his holidays. There was no harm in that, was there? She was just keeping a friend up-to-date. That would also explain her absence if she was unable to go online during the time her son was home.

She hummed as she filled the plates. The warm fragrance of the rice filled her nostrils, the soft spiciness of the mutton curry hinted at the tender moistness waiting to dissolve in their mouths. She loaded the trolley with the food and then the plates, and pushed it out of the kitchen.

Just then, the bell rang. Perfect timing. Rehna was home. She looked up to see if Rahim would open the door. But he remained seated at the table, staring at the screen of her laptop.

~Fehmida Zakeer is a Chennai-based writer. Her work has twice earned honourable mention in the Binnacle Competition, in 2010 and 2012, and been published in the 2013 READ! Singapore anthology.

~This short story was first published in our June 2013 quarterly Online-istan and was the winner of our fiction-writing competition.