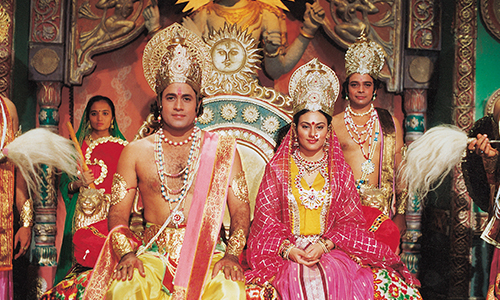 Let me acquire my share of merit by reciting the name of Ramacharita Manas three times before dwelling upon the mundane aspects of its influence upon the daily lives of the people of Nepal. We know that a dacoit turned into a saint by reciting Rama’s name the wrong way round. Perhaps my own wits will be turned downside up.

Nepal has been screening the Ramayana television series for the past couple of months and I find that it has been by far its most popular programme, especially among women. I do not mention women just as a category separate from men but as mothers, grandmothers, and would-be mothers, who have the monopoly in shaping the human mind at all times and places.

The programme does a good job of selling cultural messages at a time when Nepal Television seems to have slapped a ban on all commercials for Indian products, including baby foods and pharmaceuticals. The Indian authorities themselves have been quite generous to have their messages and way of life allowed so freely across the border when they have been meticulously restricting fuels and so many other products from coming over. Indeed, the Ramayana series very subtly hits home at a time when all other social, political, trade and commercial exchanges are closed.

Who could have thought that this was the same Kaikeyi, valiant lady, who drove the chariot bearing wounded King out of the thick of battle. But then, you see, Kaikeyi was only a woman, quite capable of this sort of treachery.

On Monday, 18 September, I chanced upon an episode of Ramayana at home. That evening, in front of the television set, I received three valuable lessons for which I feel quite grateful to the film-makers. I lay out the lessons below in proper chronological order.

Lesson One: Worship the Guruji

Even the divine Prince Rama and Princess Sita considered it proper etiquette and good manners to wash the feet of a Brahman pundit, Vashistha, when he arrived at their house. I was greatly impressed with the ritual when Sitaji poured water over Guru Vashistha’s feet, which Rama gently washed. I whispered into the ears of my wife and begged her to hold the water jug while I gently rubbed the holy feet of our own punditji when he next favours us with a visit. We might otherwise be labeled uncivilized matwali savages uninitiated into the manners of high caste and proper pedigree. Besides, it would make good sense to wash his feet: he has to walk through piles of precious dirt and filth which our neighbours carefully and painstakingly deposit on the approach to our house. In fact, it would not hurt if my family adopted the ritual of washing the feet of everyone who walks into our home.

Lesson Two: Beware of the Woman

Next, the TV series instructed me to be cautious and watchful of every woman that crosses my path, for they clearly are wicked, vicious, cruel, unpredictable and altogether insensitive. Not only the maid Manthara, but even the highly respected princess, the beloved and trusted queen consort Kaikeyi of illustrious King Dasarath, turned out to be the embodiment of evil. Who could have thought that this was the same Kaikeyi, valiant lady, who drove the chariot bearing wounded King out of the thick of battle. But then, you see, Kaikeyi was only a woman, quite capable of this sort of treachery.

Other people do not count. What counts is your self-image, especially in the context of your high-caste back-ground and family pedigree.

The matwali ethnic people of Nepal have always treated their women naturally and matter-of-factly, as equals. They neither worship their women nor despise them. But then they are not civilised people as are the thread-wearing castes. Thank heavens that here in Nepal we have a few punditjis who are running around busily organising Vratavandha ceremonies for the matwali ethnic boys such as the Khas, Magar and Kirantis. There will come a day when all Nepali men will be wearing the thread and this land will be chockfull of civilised Chhetris. The country will be fully developed as all the ethnic peoples will have been converted. Then they will learn to deal with the women properly in accordance with the message that the Ramayana series is exporting to Nepal.

Lesson Three: Beware of the Bardaan

Never break your promise no matter how painful it might be to keep it. Other people do not count. What counts is your self-image, especially in the context of your high-caste background and family pedigree. It is unwise to waste your time worrying about the common people when you have your reputation, prestige, caste status and ritual cleanliness at stake.

People become great and immortal by keeping their promises no matter how great the price they have to pay in the process. So please keep your word even if you have to destroy the en-tire world. After all, that is what the illustrious Dasaratha did. He said, “Rather death than breaking the promise for a King in the lineage of the Great Raghu dynasty.” At the cost of the suffering of millions of people within the kingdom of Ayodhya, Dasarath banished the innocent couple for 14 years. Ultimately, the action also brought about his own death by shock. So please do not worry if you have to destroy everything except your self-centered and egotistic interest of maintaining your image. What counts is the ego-centered value system of the high-caste, which is the hallmark of the Great Hindu Civilisation.

This is an especially important message to take to heart for those of us in Nepal, as there are still a considerable number of ethnic matwali people here who are by tradition and temperament collectivists and not egotists, as are most “civilised” high-caste people. The message has to be driven hard especially into those stubborn matwalis who refuse to mend their ways and insist on their ethnic identity instead of converting themselves into Chhetrihood.

One other important point to remember is that such messages should not go to them in their own languages, which their children comprehend, but either in English, or better still, in Sanskrit. It does not matter if the targeted people do not understand Sanskrit, for they will acquire enough punya, merit, by merely listening to it.

Anthropologist Dor Bahadur Bista described himself as a Matwali Khas.