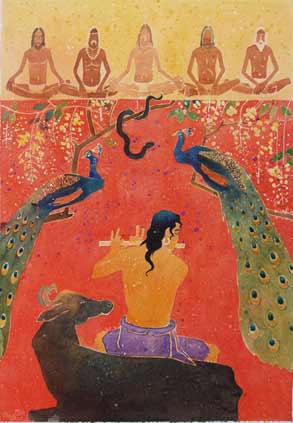 The fakir Ranjha is a character important to Punjabi folk culture. He is symbolic of creativity and creation – upon his arrival in a village, cows begin to give milk, a barren garden turns green and people become happier. Where before there was stagnation, society experiences a new beginning. Nature and humanity thrive. Ranjha is just one among the population, but his energy and optimism serve to catalyse action around him.

In this painting by Sabir Nazar, the folk hero plays his flute before a group of five. According to tradition, these are the five Sufi saints who bless Ranjha with his beloved, Heer. But the Ranjha of Nazar’s painting can also be seen as a part of this collective. His dynamic presence is reflected in the vitality of the red that fills the space around him. Framing Ranjha in tribute are two vibrant peacocks and flowers in full bloom: symbols of the beauty and creative potential inherent in the world around him. It is this innate potential that Ranjha works to awaken with his tune, and so his representation as part of a group is significant. Ranjha is a leader and yet an equal part of the greater whole. The serpent suspended on the branch above him links him to the plane on which the others sit, reminding us that the six are connected – as we all are to our communities, as nations are across artificial divides.