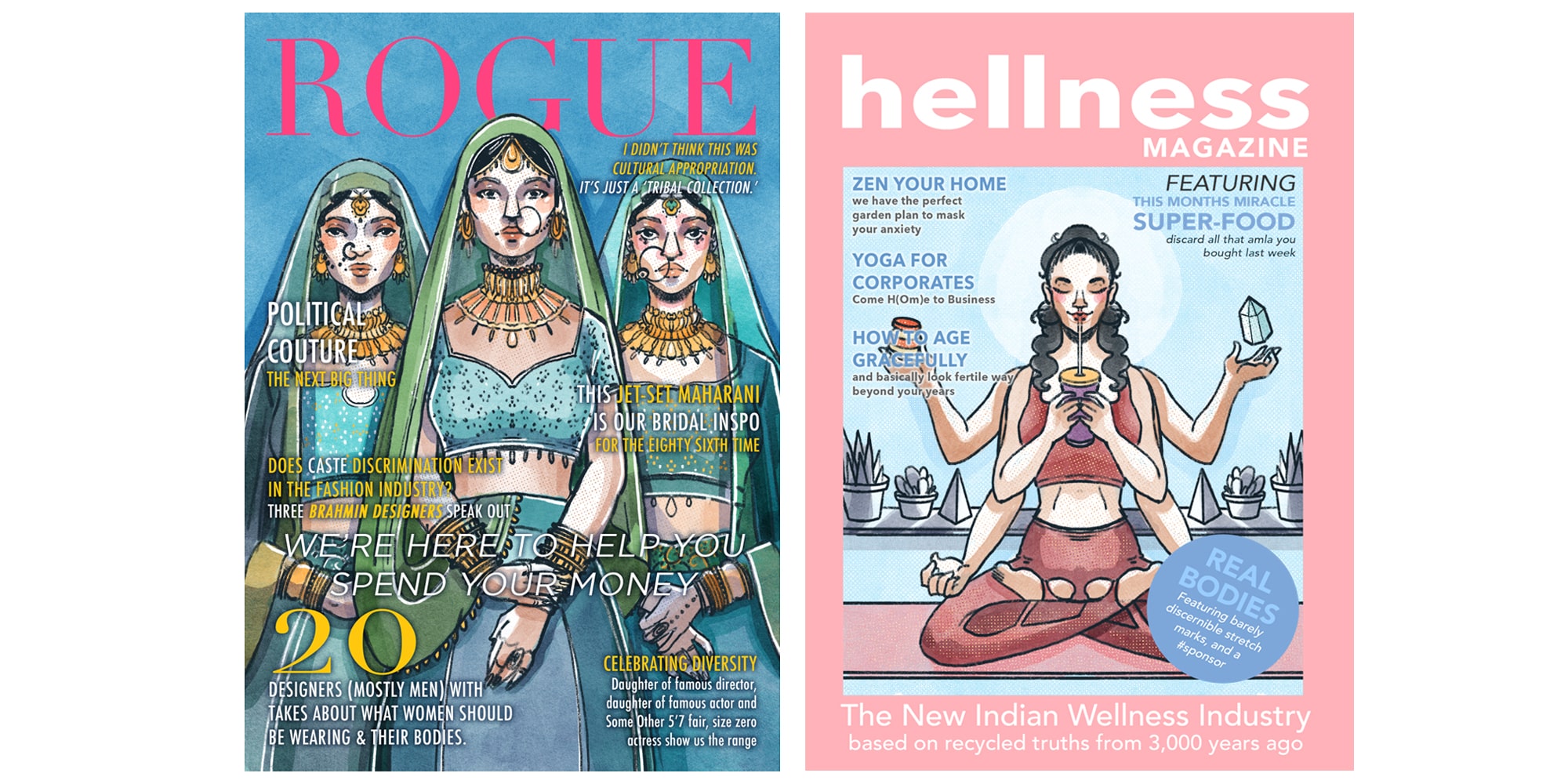 When I was a teenager in India, buying fashion magazines was not just a luxury, it was an almost unjustifiable act of decadence. In the early 1990s, before international publications like Elle and Harper’s Bazaar came to India, fashion magazines were imported: a single issue of British or American Vogue would set you back at least INR 500, or the amount a distant aunt may have spent on your birthday present. Often caked in a patina of import-duty dust, the pleasure of wiping the cover clean to see the bright orange tags with exorbitant prices – in both pounds and rupees – would result in inexplicable, albeit fleeting, delight. Khan Market magazine shops would often keep these publications sealed in plastic covers, ensuring that the distance between you and Kate Moss in an all-white bikini somewhere in St Tropez was as far as that between first world and third.

Although cut-price fantasies were now available everywhere from your local market-stall to the vendor at the traffic light, the decadence of actually paying for this publication remained.

I eventually took to renting these magazines overnight, from a little video rental shop called 3L. That wasn’t cheap either (about 70 rupees daily) but my mother would give in from time to time, especially if I had just had a painful orthodontic treatment. The pleasure of renting foreign Elle was satisfactory but subdued, much like the experience of opening the Giorgio Armani ad perfume strip to discover that the scent had already dissipated: too many noses and too many wrists had diluted the sandy, sexy beach smell in their own private seventy rupee per night fantasies.

But the real decadence of these magazines went beyond their limited availability and price. Their luxuriousness had to do with their emptiness, their ability to enrapture young women – their primary audiences – without offering much beyond simulacra in return. They fueled fantasies by keeping us thirsty for shiny, Western capitalist goods, and for assuring us that we were subsumed in their dreamy, profit-making systems. As Naomi Wolf reminds us, the power of the fashion magazine lies in its split personality. The endless, shallow ads, which sit next to, at times, intelligent, feminist content mirrors the schizophrenia many women feel inside. The good magazines play on likely consumer insecurities (stretch marks, darker skin, saggy chins, wrinkles) while also providing an escape.

Thus, touching lightly upon the continuities of caste and male power that often dictate fashion trends (particularly during wedding season), we play on Vogue, offering up its naughty antithesis.

By 2007, fashion magazines became much more affordable to upper middle class Indian women – their target audience. By then, Conde Naste had consumed enough liberalisation cocktails to bring an Indianised version of every big name into the market. Vogue was famously launched independently (the arrival event was marked by private jets, rose petal carpets, and oceans of champagne). Now priced at INR 100 and INR 150, these publications became things you could actually buy, and were occasionally even spotted at a fancy dentist’s office. They were no longer shared and circulated between friends; they were stacked by new bathtubs and polished coffee tables in independent houses with split air conditioning that would run noiselessly through the day.

Although cut-price fantasies were now available everywhere from your local market-stall to the vendor at the traffic light, the decadence of actually paying for this publication remained. It lived in the frivolous act of spending money to form an allegiance with the publication to live in the already vanished present; for this very moment in which snake leather shoes are everything, and simultaneously, dead by the time you finish reading this sentence. It is cemented in paying for what Wolf calls the ‘Beauty Myth’, where a ticking bomb is breath. As literary theorist Roland Barthes reminds us, the magazine is like the “novel in which nothing happens… the infinite variation of a single tautology.” And like many fashion magazine addicts, actively signing up for this is exactly where the pleasure lies.

Many of the ‘current’ trends are traditional Indian rituals of self-care once deemed backward and time consuming, but now newly legitimised by Western beauty industries

In this playful experiment, I collaborate with Delhi-based illustrator Pia Alize Hazarika to probe our common weak spots and frustrations with popular Indian fashion magazines. We unpack, what may be seen as our own inner split feelings. This activity began with us going to the neighbourhood corner newspaper and magazine shops and just hanging out; we were among many pairs of women doing the same. Within moments of browsing – which we were already habituated with, and became better at as this experiment developed – we noted a few things: the magazines available here were the ones that were available almost everywhere else like it, the content on their covers varied only slightly, as did the actresses or celebrities they featured, and the prices at which they were sold. Most obviously displayed were four publications – Vogue, Elle, Bazaar, and Hello! – three of which we have re-interpreted here, in this tongue-in-cheek partnership.

In this re-interpretation, we asked the following questions: what would these magazines look like if they subscribed only to truth-telling? How would they look, feel and smell? How would they disrupt our given idea of the fashion magazine?

GOODBYE! seeks to do away with generational and caste-linked wealth (on which this magazine is typically based) and welcomes a new economy of cool.

In Rogue, we tackle the lack of diversity that characterises fashion magazines in India, but nonetheless captures its approximately 28,000 readers monthly (other magazines have approximately the same number, give or take ten percent). The success of this magazine is also connected to its seasonal hyper-awareness: ie, its malleability to Indian wedding season (October- February), and the peak for bridal-wear designers. During this time, Vogue – a quintessentially American product – desifies to its fullest, embracing the marriage between high fashion and patriarchy. Editions are complete with trousseaux sections, and pre- and post-nuptial holiday destinations. There is little mention of the real-life issues many brides face during this time – like how to negotiate leave from work for their honeymoons or pay for the astronomically priced wedding apparel the magazine suggests. Thus, touching lightly upon the continuities of caste and male power that often dictate fashion trends (particularly during wedding season), we play on Vogue, offering up its naughty antithesis.

This is our fictitious ‘wellness’ magazine. We bring out its ill health by noting its ‘trendiness’ and lack of novelty in the ‘wisdom’ it often propagates, while infusing its readers with a sanctimonious commitment to the soul. In wellness publications, religious and spiritual truths are often held up as sacred, and combined with capitalist demands: at once, the trip to a resort in the Himalaya becomes ‘holistic,’ – ie, good for your mind, body, and business – and chanting can be channeled to anything from sorting out your marriage to forgiving your tax errors. Images often appropriate symbols of Hindu goddesses to communicate both blessing and forgiveness, cementing a link between wellness, religion, and capitalism. With such imagery, the experience of reading this magazine as a middle- or upper-middle-class Indian can then be both familiar and alienating. Many of the ‘current’ trends are traditional Indian rituals of self-care once deemed backward and time consuming, but now newly legitimised by Western beauty industries and endorsed by Hollywood actresses. In the Subcontinent, we are asked to consume these practices – turmeric face masks, for example – as radically new.

In this re-interpretation, we asked the following questions: what would these magazines look like if they subscribed only to truth-telling?

GOODBYE! Is our play on Hello! Magazine – which is known for its constant display of high net worth individuals in their plush mansions. GOODBYE! seeks to do away with generational and caste-linked wealth (on which this magazine is typically based) and welcomes a new economy of cool. In this role-play, we politicise the contents of the magazine, re-imagining it as intended for a young activist who may, nonetheless, care about fashion. While trying to say something different, we stayed committed to the casual hi-bye like language, in an attempt to not completely alienate the typical readers of this publication.

In BIZARRE – our twist on Harper’s Bazaar, which is a comparatively critical mainstream fashion magazine – we critique claims the industry makes to sustainability. By calling out the immense carbon footprint that is often involved in making environmentally friendly clothes, and revealing how ‘fair fashion’ only continues to profit those at the top of the ladder, we call out sustainability as a new fashion trend. We see it as a set of legitimised practices that continue to devastate the environment. This includes the practice of mass-producing cotton totes at industrial scales. We also call attention to the forbidding prices at which ‘ethical’ clothing is sold, an unfortunate fact that ties morality to the possession of wealth.

Meher Varma is an anthropologist and writer based in New Delhi. Her interests include fashion, food, and pop culture in post liberalisation India. Meher is currently working on a collaborative compilation about clothing in India, and can be contacted on instagram at @agramofmeher. Pia Alize Hazarika is an illustrator and designer whose work has been published by Penguin India, Captain Bijli Comics and others. She runs PIG Studio and bounces between New Delhi and Bombay.