Skip to content
Notes from the field > The Recce Team

NOTES FROM THE FIELD: How an independent team of volunteers travels to earthquake-affected sites. 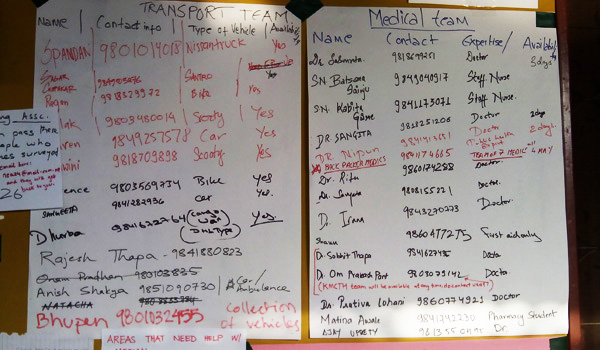 At a volunteers meeting in Lalitpur, a stranger eyes the motorcycle helmet in my hand and comes over. He says a supply team heading to Jalbire in Sindhupalchowk district needs someone with a motorcycle to lead the relief convoy; as an afterthought he adds that I will be part of the ‘recce team’. I don’t fully understand what he means, but say yes anyway. After talking to another person for a minute, he informs the group standing nearby that the supply truck is being loaded and we will have to wait a while before we can get on the road.

Since the April 25 earthquake, a feeling of volunteerism seems to have seized Nepal. Citizens have been organising themselves and providing aid to those not reached by the government or organised NGOs. Everyday individual volunteers gather in hubs across Kathmandu Valley to coordinate operations, bring in relief supplies, and transport them to villages and township not yet accessed. As these groups push further into the interiors with their limited relief materials, reports of desperate communities fighting amongst themselves, with the relief teams, or in some instances, blocking supply trucks from further entry, have also begun to stream in. In response, the citizen volunteer group operating out of Yellow House market in Sanepa – who travel without official security escorts – are employing a number of strategies that help them safely deliver aid.

Besides gathering ad hoc information from police check posts en route to the village,  the reconnaissance or ‘recce’ team, made up of about four people, travel ahead of the main supply convoy on motorbikes, check ‘the situation’ and relay that information back to the relief team. Those on recce have to travel light on motorcycles –ubiquitous and fast they are the perfect vehicles for information gathering. It helps that these bikes pass narrow mountain roads often blocked by landslides. The instructions are clear: if you feel something is off, report back immediately. “Getting goose bumps is a usually a good signs that things are not too good,” instructs the team leader before we head out of our supply base in Lalitpur.

Besides a security precaution, the recce team has also been used to scout a particular area a day or two before hand, in order to gather information and pass that data to the relief coordination group at the base. Based on this information, volunteers get an idea of who needs what and trips are planned accordingly. Given limited relief supply, and a lack of coordination amongst the different groups across the valley working to provide aid, the team ensures that aid reaches those with the most urgent need. A quick scan of the village can help avoid duplicating assistance.

On a recent recce mission from Kathmandu to Sindhupalchowk, for which I formed part of the recce team, we had to stop because a landslide was still being cleared by a bull dozer. Further in, we stopped once more as we received reports of a clash between two villages over relief supplies near our final delivery point of Jalbire. At this point we decided to change the planned route. After a brain-storming session with the entire team, with eight people peering over a map, in an abandoned road side restaurant for over an hour, we finally decided to go to a tourist resort, 12 kilometres from the Tibetan border, which was functioning as a base for a team of American doctors. On our way, we saw a dead body floating in the river below; we took note, but pushed ahead.

Outside the gates of the Borderland Resort, villagers surrounded another supply truck loaded with food supplies. Dorje Tamang, an inhabitant of the nearby Gathi village, tells me it’s not fair that his neighbour takes home two sacks of rice while the remaining households in his village get one sack each. A quarrel breaks out over how to divide the first round of relief supplies to finally reach them.

Behind the gates of the resort, the team unloads the supply. We hand over responsibilities to the team of American doctors who are operating from the resort. They tell us they will supply aid to the adjoining villages. Everyone gets back in their vehicle. As for the recce team, the leader tells me, we can relax a bit on the ride back.

~Slok Gyawali is an assistant editor at Himal Southasian.

~‘Notes from the field’ is a reporting initiative, where we bring stories of the people and places that have been affected by the April 2015 earthquake in Nepal.

Slok Gyawali is a writer based in Chicago.