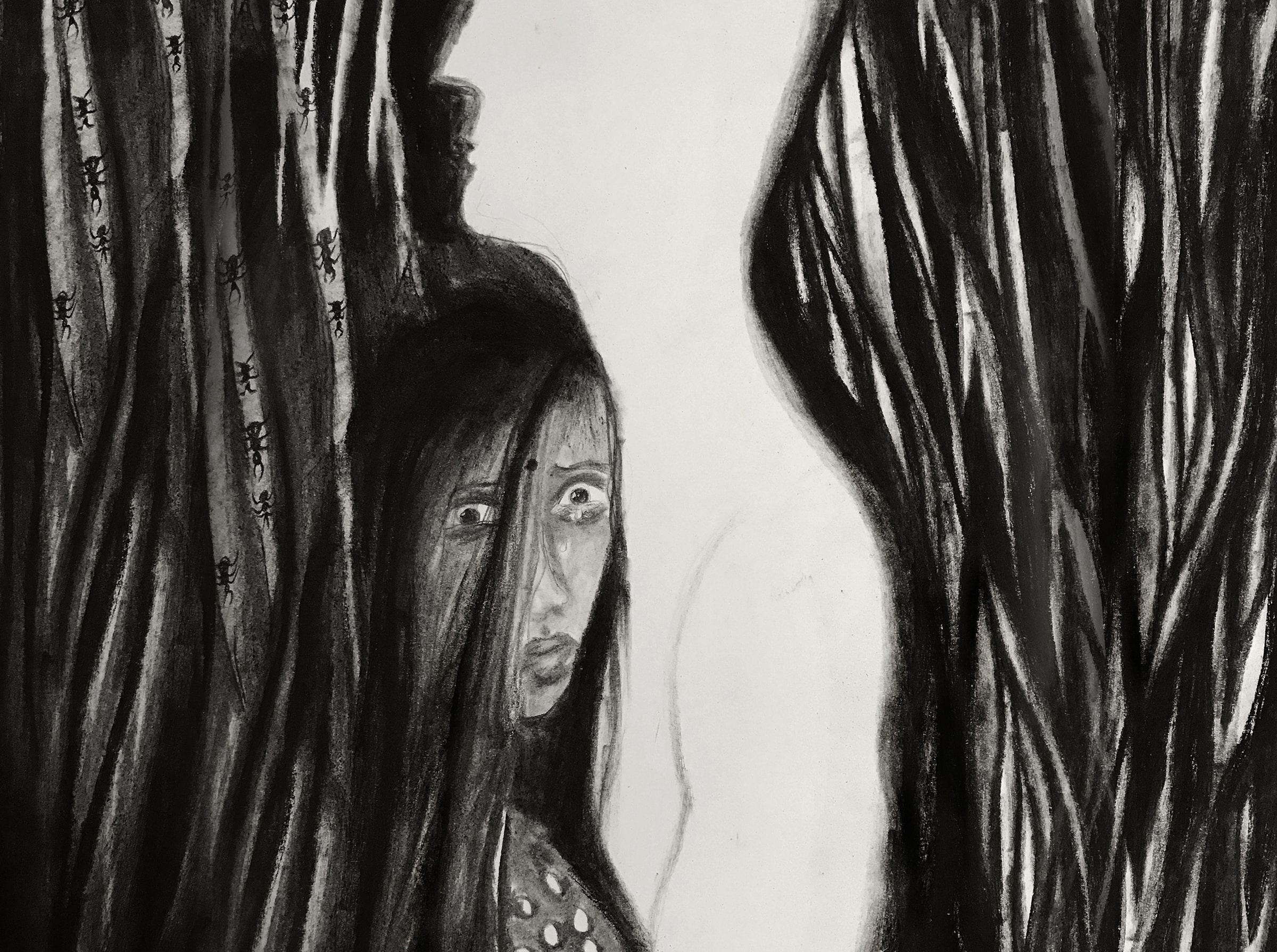 They dumped her under the tree with the red ants. Every pore in her ravaged body screamed in agony at the contemplation of what the ants might do to her. She imagined them devouring her, more persistent, devious than the uniformed men who had dragged her away.

There were many myths and stories about the tree. She had heard them from Amma too – the lines on her face deepening as she narrated one of her tales. The ants were immortal, she had once said, folding her hands as if in supplication to the tiny crawling red creatures that often crowded the forest. Their little red bodies formed a vicious canopy over the dried brown trunk, creeping up the long sinewy branches to cover the green leaves. The tree then became inaccessible, almost untouchable.

She had seen them while she was tying together bundles of dried branches with strands of old cloth, torn away from unused sarees rotting in the nether corners of the hut. The ants often rode up in a single line, fashioning a cavalcade of tiny red bodies over the mossy exterior of the village well. She tried to avoid them while filling the earthen pots from the only communal source of water in the area.

This was all before rivers of red began to flow through the forest. The villagers were now made to gather routinely at the haat square by men in uniform. They talked about the sarkar bringing ‘scheme’ into the village. To return the favour, the villagers had to tell on the boys. The boys! Her brothers – both older – had been brought home riddled with bullets, their ripped clothing mottled with blood. Her father had wailed over his dead sons as she stood some distance away, her gaze vacant.

Some months after her brothers had returned as corpses, they came for Hariya – her lover. Hariya had been friends with her brother. She liked his smile at first, then the touch of his hands on her skin. Hariya had strong hands – made her feel good each time he took her, in the forest, their dark sweaty bodies hungry for each other. It was always under the tree with the red ants.

She often worried about the ants attacking her naked body – or even Hariya’s. But he wouldn’t stop, pushing harder as she moaned with pleasure. Then he would grunt as he came, sweat pouring from his forehead, black skin glistening in the fading sunlight.

“Bloody Maoist, shameless terrorist,” they had called him as they dragged him through the forest, the wet leaves making a swishing sound under his weight. He fought hard, screaming for help, legs kicking violently at his tormentors. She was told this by the nosy neighbour who derived pleasure in informing her of her lover’s plight. The news had made her sick. She had known then what would become of Hariya. He had not been seen since.

She was almost reconciled to marrying Lakhia, now that Hariya was gone. Many months had passed before she agreed to let another man put his hands on her. Her father had spoken highly of Lakhia – he did odd jobs for the village folk and could read and write, her father said. Lakhia would give her a good future. Ever since Hariya’s disappearance she had been despondent, sitting around with a sullen expression. Her father had begun to worry. On the day he broke the news of her betrothal to Lakhia, she had only been able to force a smile.

Lakhia was a smaller man than Hariya. She wondered about the size of his manhood, every time she caught him staring at her naked breasts. He would usually leer from a distance, armed with a tiny crooked smile. One day he had sneaked up from behind and grabbed her breasts. To her surprise, she had caught herself feeling pangs of desire for the man. He had continued to fondle her breasts and she had begun to enjoy the sensation. That night, Lakhia made love to her under the tree with the red ants. It had been her idea – she wanted to relive the memory of Hariya that was vivid in her mind. But when Lakhia entered her with deep thrusts, she broke out of her reverie to feel the full force of their coupling.

It had all been uphill since then. She was not suspicious of Lakhia’s manhood anymore. It had given her pleasure and been welcomed into her with desire. Their meetings under the tree with the red ants became frequent. Her father was more at ease now whenever she slithered into the darkness for those amorous encounters. Until one day, Lakhia disappeared too.

Jhuntu had seen him with some uniformed thugs. That’s the last anyone in the village saw of Lakhia. The neighbour woman – as greedy as ever for juicy goings-on – came to inform her father. He had broken down as sobs wracked his body. She stood transfixed some distance away, her eyes closed tight – as if the world would stop talking if she shut it out. Again, her life – her tranquil life – had been turned upside down. The man she had grown fond of had disappeared – again.

Her brothers, Hariya, now Lakhia. The list – it seemed to her – was growing longer. As she had feared, the women around the village took turns to nag her about her arresting beauty which had driven two men to their deaths. The men would simply avoid crossing paths with her, not even looking up to greet her when they visited her father. Amma had taken her face in her grizzled and rough hands and said, “It’s not your fault, my child. The gods of the forest willed it this way. We have forgotten about them. We no longer care for them. The police thugs are sent by the gods.”

She did not believe Amma, for once. She knew who they were and what they were doing in her village – in her forest. They came with foreign guns and took someone away whenever they set foot in the village. They were like the plague that ravaged the village before she had been born, her father often said. Ever since the sirens had sounded and the uniforms turned up, more and more of the boys had died, some girls too. Parents had started fearing for their children – who wanted to be parent to a disappeared child?

They were a curse, worse than the curse of her life since Lakhia disappeared.  Her father would squat on the verandah and lament his losses, throwing furtive glances her way, as if he felt spasms of guilt for despoiling his daughter’s life. She never blamed her father, nor did she torment herself by thinking about the gods of the forest. Why would they shower their anger on her? What had she done wrong?

She knew she wasn’t responsible. Had she been, they wouldn’t have spared her, she thought. The uniforms were stealthy and cruel. She had seen them gathered in bunches at the haat square, ogling the women as they passed by. One of them had even dared to molest Munia in broad daylight! They say he grabbed her wrist and tried to pull her saree away to expose her breasts, while the others smirked and laughed. Munia had not ventured out of the house since.

Then one day they took her. They pulled her out of the hut as her father lay in a corner, blood oozing from a wound on his wrinkled forehead. She screamed in pain as they dragged her along the dirt floor of the hut, kicking, trying to get into a position that would enable her to connect with their legs. “Drag the whore,” they yelled as skin scraped away, exposing flesh.

Deep in the forest, they took turns.

“Whore.” He punched her face with his fist.

One of them – she could not see his face clearly, as tears and blood clouded her vision – buried his teeth in her breasts, drawing more blood. Then he thrust himself into her. The pain was intense, she had not felt it before. She had also not felt so much hatred before.

After they finished with her, they took time to wipe the sweat off their bodies with pieces of her saree torn to shreds. She guessed it was hers. Never sure, her eyes barely open. The tall one spat on her before they started dragging her naked, battered body again.

“Lakhia said she was juicy. The lout wasn’t wrong at all.”

“She fucked that Maoist Hariya.”

They turned their backs on her bleeding, dark, broken form. “Maoist whore!”

When she woke from her stupor, it was morning. The red had spread from between her legs and breasts to the leaves under her body. Then she saw them, the ants covering her legs.  As she closed her eyes, she felt them crawl into her mutilated vagina, their tiny bodies mixing with the red of her blood.

By the time they came to her bloodied breasts, the pain had shut out all sight and sound. What remained was the gnawing of the ants on her damaged body, a glowing mass of red.

Read our editorial reflections on the 2019 short story competition.

Roshni Sengupta teaches politics and language at Jagiellonian University, Krakow. She writes on Indian politics and media and is currently working on an anthology of short stories.