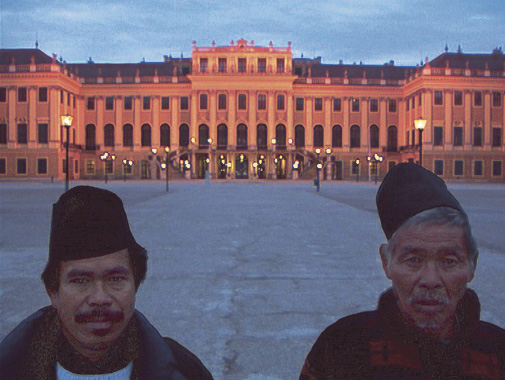 Screen-grab from ‘Chickenshit & Ash – A Visit to Paradise’ / himalayafilmfestival.us

Anthropology was born in sin and still struggles to absolve itself. Self-reflexivity and all attempts to overcome the circumstances of its birth, and transform the practice of anthropology into a more egalitarian rendition of other cultures are still ridden with problems. New techniques, some of them bordering on the gimmicky, surface in anthropology as ways of writing culture. From participant observation, to thick description, to letting the ‘object’ speak, various methods have been attempted and advocated in the effort to rectify the hierarchy between the anthropologist and the subject.

Since imbalance is inscribed into the practice of the anthropologist (literate and more powerful) observing another set of human beings (illiterate and relatively powerless), it is seldom that such sophistications of method in fieldwork and narrative technique manage to overcome the inherent problem.

Anthropological brilliance usually goes hand in hand with a developed individual sensitivity. It is the successful meeting of this challenge of subjectivity that redeems anthropology, and enables it to express itself in numerous ways—in monographs, photographs, diaries and films. Film is a particularly useful medium of anthropological expression, but it is also a tricky one for obvious reasons. Cinematic anthropology must resist more temptations than its traditional counterparts.

The film Chicken Shit and Ash is a bold enterprise but does not quite manage to resist the temptations. The production is bold because it does what normally does not happen, which is a kind of anthropology in reverse; where it fails is that the narrative is not equal to the demands of such an enterprise. The ‘other’ remains the ‘other’, and the ‘self’, though concealed from the camera, is very much in the foreground.

The film records the visit of two Tamang men from east Nepal’s Dolakha district to Vienna (Austria), and in the process captures a Western, foreign world through their eyes. In this sense, the film tries to reverse Orientalism, by ‘exoticising’ the developed world. In order to silence the voice and perhaps even the perspective of the observer, and to allow the observed to ‘speak’, the film is almost entirely in the Nepali and Tamang languages. English subtitles make the dialogues comprehensible to a wider audience.

The first part focuses on the rhythm of life in the village of the two men. Close-up, lingering shots, like the sequence on the coarse fingers of a woman sifting grain, or the dust kicked up by a child ambling along a path, draw attention to the pace and laboriousness of everyday life. The fields, houses, settlements, footpaths, sources of water, agricultural operations, rituals and forms of medicine (traditional) are shown along with the social world of the inhabitants (‘in their own words’).

The unhurried shots are punctuated by accounts of the village’s old and young, women and men. All of these make for a commendable effort at recreating the context to which the two protagonists belong. The extraordinarily long duration of this part of the film suggests that the production as a whole is directed at a Western audience, since for someone from the East (in cultural terms) or South (in developmental terms), barring the specifics of language and ritual, the details of life in the village are more or less familiar and could have been summed up in a few frames.

The other problem with this section is that, on the face of it, the villagers seem to be speaking suo mottu. But on reflection, they are answering questions put to them off camera. The inhabitants of the village are aware of at least some part of the worldview of the questioner. One of them says, “…people marry at a young age, between 15 to 16”. ‘Too young’ and ‘too old’ for this or that is usually informed by a context. Fifteen clearly is too young to get married in the context of school education, professional qualification and career. None of this is in evidence in the village. Yet the person knows that 15 or 16 is too young an age to get married. Obviously, the village is not so isolated or untouched as its socio-economic circumstances suggest, neither is the person interviewed unaware of the social world of the investigator. The answer is informed by this reality. Since the questions are never presented (only the answers), nor the faces of those interviewing the villagers, one can begin to wonder at the extent of editing that went into presenting the ‘subject’s’ voice. It is in the editing that controlled subjectivity encounters one of the most dangerous pitfalls of anthropological presentation.

Seeking starkness
The elaborate focus on life in the Tamang village was perhaps also intended as a juxtaposition. The two men are flown to Vienna and the rest of the film records their reactions to what they see—from the view from the glass windows of the prefabricated hut on an Austrian mountain, to the traffic, the streets, and the way of life—and these would be those of any poor villager when confronted with the sights of advanced capitalism.

It is all a little bewildering for the two Tamang men. But if their ‘reactions’ to modernisation had to be recorded, some of it could have been had in Kathmandu city or by the apron of the Tribhuvan International Airport. However, for the juxtaposition to ‘succeed’, the contrast has to be stark. Kathmandu is after all at an intermediate point between the subsistence economy village and service-sector dominated Vienna. It has a bit of everything and in the melting pot the contrast can never really be that presentable.

The experience of the two Tamangs in Vienna presents a series of sharp differences: the ease of buying food at the department store, as opposed to back-breaking labour on the fields; the old-age homes in Vienna contrasted with the social support systems offered by pre-capitalist systems; the Church, as opposed to the rituals and practices in a Tamang village; the slaughter house, as opposed to the killing and cutting of chicken for ritualistic purposes; and the pace of life on the streets in contrast to the slow tempo of life back home.

There is a particularly striking aspect of the film—the robust and witty responses of the two Tamang men. They are at ease in Vienna and there is an endearing forthrightness to their reactions that is so vastly different from the demeanour and conduct of those who go to the cities of the Western world in search of work, mostly as illegal immigrants. In the landscape of the world order, it pays to be an escorted guest. But such hospitalities can only be extended one way, because life at that level is mainly about the hard currency and the visa. And it is because of differences of this kind that the camera must be especially sensitive. Unfortunately, Chicken Shit and Ash neither does well on this count, nor does it have any great point to make. Occassionally, there  is that sinking feeling that a spectacle has been contrived for a Western audience.

By the end of Chicken Shit and Ash, one is left to wonder at its purpose. Is it to critique modern civilisation through the Tamang village and its two delegates to Vienna? Is it to show the starting and culminating points of a developmental process? Or is it to express a certain agnosticism about both ‘tradition’ and ‘modernity’, in the sense of pointing to the virtues and vices of both. None of these points comes through with sufficient force. What then is it all about?

The engaging title of the documentary refers to a Tamang myth of creation, in which, as the elder of the two Tamang delegates to Vienna points out, god tried to make the human out of various exotic materials and nothing worked—until the model in which an exasperated god tried chicken shit and ash came to life.