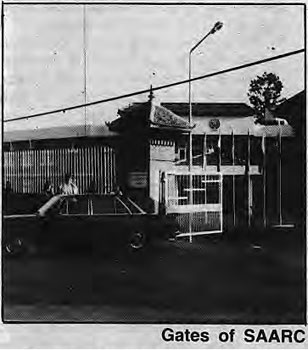 Apple State´s Problem:Too Many Apples
Last year, Himachal Pradesh produced a record 300,000 tons of apples, worth IRs 550 million. The bad news is that they require nine million wooden crates to be distributed .to the far corners of India. To satisfy that demand 65,000 evergreeens, most of them more than a century old, will have to be felled. While the crates cost IRs 270 million, the Himachal Government is supplying them to growers at a subsidised rate of IRs 90 million.

The state Government of Virbhadra Singh, himself an apple man, says it is committed to conserving the 15 per cent of Himachal´s total area that is still under forests. With that in mind, he had boldly decided to impose a complete ban on the felling of trees for making crates. The decision took even envi-ronmentalists by surprise, and brought him in direct confrontation with the state´s powerful apple lobby.

Large orchard owners and the apple trade middlemen claim that only wooden cases will protect their fruit adequately. Some 1,000 sawmill operators and truck owners who lift 25,000 lorry-loads of apples every year also have an interest in the continued use of wood. The heavy crates also enable porters to earn more, and they are easier to handle. In the cities, the wooden crates are bought for cheap and converted into the poor man´s furniture.

Environmentalists worry that with apples providing 80 percent of Himachal´s horticultural wealth, forests may be sacrificed for short-term economic interests. If timber is still used by the turn of the century, the demand will be for 30 million boxes. That makes 200,000 standing conifers.

SAARC Sets Up Shop in Kathmandu
The headquarters of the South Asia Association for Regional Co-operation (SAARC) was inaugurated in Kathmandu in January. City fathers, foreign ministry types and whoever had a stake got excited once more over prospects of an “internationalised”. Kathmandu. It became the second agency after the International Centre for Integrated Mountain Development (ICIMOD) to base itself in Kathmandu.

“Before  we  get too excited,  let us remember that SAARC and ICIMOD had no other choice but Kathmandu”, says ft political scientist in Tribhuvan University. “To be like Geneva, a host to conferences and organisations, we´ve got to straighten up our act.

There are, in fact, four or five development institutes under the Economic and Social Council for Asia and the Pacific (ESCAP) that would consider a move to Kathmandu, One of them is then Asia-Pacific Centre for Transfer of Technology, which is said to find operating conditions too restrictive in Bangalore. There are also proposals to establish an international institute on glaciology and another for mountain medicine, with Kathmandu as a possible base for both.

The prospects would seem good except that Nepal is following India´s lead in forming its host country attitudes. The International Diarrhoea Research Institute in Dhaka and the International Institute for the Management of Irrigation in Colombo receive more facilities (in terms of government subsidies, tax-free premises and non-taxation of national staff) than does ICIMOD in Kathmandu.

With Delhi and Bangkok already flooded as regional hubs, and other centres like Singapore and Seoul considered unsuitable because they are too “developed” or westward-oriented, the search is on for a politically acceptable host city. “As probably the most neutral State in the region, Nepal is a natural centre for international organs,” says Colin Rosser, Director of ICIMOD. He continues, “We hope to prove to the world that, making Kathmandu a base, it is possible to maintain the highest international standards, and thereby start a trend”.

A Subterranean Himalaya
Scientists have discovered a second “Himalayan” mountain range beneath central India. The hidden mountain system is about 1,500 km long and 300 wide, with a 6,000 metre peak below Amarkantak, according to the discovery by scientists of the Satellite Geophysics group of the National Geo-physical Research Institute in Hyderabad. The underground mountain range has been found to run parallel to the Himalaya range in a northwest to southeast direction. It is bounded by the Mahanadi and the Godavari rift valleys in the east and the Aravalli in the west,´according to the study reported by the institute scientists, in the prestigious American journal “Geophysical Research Letters”, The mountain system is believed to have emerged due to “upwarding” of the earth´s crust at a depth of less than 40 km from the surface. The deep underground mountain system is one of the largest linear structures of the sub-continent next only to the Himalaya mountain system, according to the report. 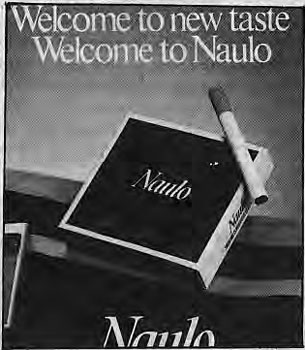 The National Remote Sensing Centre in Kathmandu, which became fully ope-rational in 1984 with help from USAID, boasts of one of the most sophisticated equipments in Asia to analyse data and imagery from satellite and aerial recon-naisance. It has a multidisciplinary team of scientists and engineers ready to pro¬vide assistance in forestry, agriculture, soils, geology, hydrology, meteorology, computers, cartography and photography using remote sensing techniques.

And yet, the Centre has not been able to perform as it should because of “technology resistance” among the more, conventionally trained, says it chief, Krishna Malla. The cost of raw satellite data, which suddenly nearly quadrupled last´ year, was another reason given.

The Centre is equipped to analyse the US LANDSAT data, which it gets from receiving stations in Hyderabad or Bang-kok. It takes fourteen frames to cover the whole country, with each frame cov¬ering an area of 185 sq km. Since the Reagan Administration sold LANDSAT to the private Earth Observation Satellite Company, the charge went up overnight from US$300 per frame to US$1000. Says Malla, “Its a real problem, because we now have to go through a tortuous trail to get funding. It took us three years to get US$10,000 to do a study on the Arun River Valley.”

The Centre is currently doing a study for the national parks and wildlife office on the as-yet pristine Khaptad plateau in west Nepal: its drainage, altitude differential, vegetation and wildlife re-quirements. A job ´hat could take four years on the ground, but most of it can be done with the use of computers in 15 days.

An Unwelcome Pack
Naulo, the newcomer to Nepal´s highly protected cigarette market has been welcoming itself all over Kathmandu in banners and billboards. While the Surya Tobacco Company has done itself credit by printing a health warning on the side of the cigarette pack, what concerns us is the public health policy of HMG.

The Janakpur Cigarette Factory, purveyor of Lali Guras and Saipatri to the wealthy, and unfiltered Gaidas and Asha churots to the rest of the Janata, was established with Soviet aid in 1962. Happily, no cigarette factories had opened in the two dozen years since -until Naulo. “We must be doing everything possible to discourage smoking among Nepalis”, says a Nepali heart and lung specialist, “It is no consolation that the new cigarette is aimed at the upper crust market. There is such a thing as class mimicry, and also, what is to stop the factory from churning out cigarette for the villager´s pocket? The upscale cigarettes do not make money in Nepal, the Janakpur people will tell you that”.

Surya Tobacco has also just unleashed a second brand of cigarettes. They are called, shockingly enough, Bijuli and banners across Nepal announce you get one Bijuli free for every Naulo purchase. Meanwhile, Janakpur Cigarette Factory has also been granted permission to open a subsidiary, it is learnt. University Begins Study of Eastern Himalaya The North Eastern Hill University has begun a research project on the ecological development of the Himalaya. The study, in association with the Universities of Dibrugarh, Guwahati, Jorhat and several government departments, will attempt to further understanding of the mountains of the Indian northeast.

The University hs so far secured approval for eight of its proposed 14 projects, the total cost of which is expected to come to IRs 2.25 million. As a frist step, the University is going to prepare an ecological perspective of the region, which will include the ecological history, evolution of geographic features, study of flora and fauna and the human presence through “geological time”. Answers will also be sought to the “ecological predicament” confronting the region, according to a University official.

He also said that the project would aim to preserve genetic diversity and ensure effective utilisation of species and the ecosystem.

Punya Bahadur To the Rescue 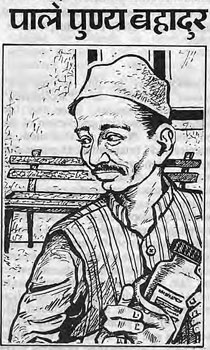 Other countries might have Superman and Popeye, but now Nepal can boast of its own uniquely homegrown cartoon character. Except that our new hero, Punya Bahadur, who is a peon at an unspecified health post in a durgam chhetra locale, would be too shy to help any damsel in distress or foil a robbery at a district bank. The quiet, uncomplaining Punya Bahadur is more at ease acquainting villagers with oral rehydration salts, cleaning wounds and treating eye infections. He also sweeps the floor and brings endless cups of tea for the resident doctor, who spends his time reading Gorkhapatra, chatting with friends, and ordering tea.

Created by artist Durga Baral, an art teacher in Pokhara, Punya Bahadur is part of a cast of characters of Nava Drishya, an ambitious Unicef quarterly that hopes to bring development issues come alive for the “new literates”. The second issue of the finely produced publication will be on the stands this month. Unicef hopes that, in time, the distinctive cartoon characters and the highly believable village-settings will create enough of regular readership for Nava Drishya to be a commercial success.

Care, coexistence and predation in a recent Hindi film on human-animal relations.

On borders and maps as concrete sites of state violence.