Skip to content
Special Packages > Under the Shadow of the Bollywood Tree: web-exclusive package

Under the Shadow of the Bollywood Tree: web-exclusive package

Under the Shadow of the Bollywood Tree: web-exclusive package 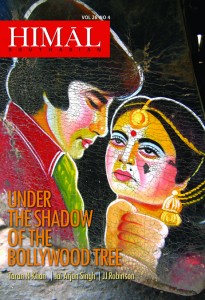 Bollywood! The term itself is contentious. Does it denote a certain type of film made in India? Or only those made in Mumbai? Only Hindi films made in Mumbai? Or all Hindi films from other places as well? While for a non-Southasian audience the term ‘Bollywood’ has come to encapsulate or at least represent movies made in India, within Southasia it is often used to represent the entire oeuvre of Hindi films. Yet there is something distinctly ‘Bollywood’ about a certain kind of movie that is difficult to distil on paper though recognisable when one encounters it, whether in Tashkent or Johannesburg, Kathmandu, Kolkata or Kabul.
In Himal’s fourth quarterly issue ‘Under the Shadow of the Bollywood Tree’, we use the term ‘Bollywood’ consciously, suggesting that it may even be time to introduce it as an adjective or verb in the Southasian lexicon. Indeed, Southasians know exactly what is meant when movie-goers emerge from a cinema hall, claiming that “it was too Bollywood!” In this, the centennial year of Bollywood, Himal thought it appropriate to look at, beyond, under and around it.
Launched by none other than Gulzar and Prasoon Joshi on 28 September at the Bangalore Literature Festival (and timed to coincide with the Film Southasia festival in Kathmandu from 3-6 October), our quarterly print issue includes articles on what Maldivians are currently watching, Afghanistan’s relationship with Bollywood (more complex than a simple love affair), the rescue of Delhi’s cinema halls by Bhojpuri Cinema, Bhutan’s burgeoning independent film scene, as well as an impassioned defence of the much-maligned song-and-dance sequence. As a complement to our print issue, we are pleased to offer a selection of web-exclusive articles for your discerning pleasure.
The first of these, by filmmaker and all-round industry expert Gargi Sen, discusses the vital role of film festivals in supporting the documentary format in Southasia. Indeed, subverting notions of the genre as purely informative must be achieved if the genre can gain a foothold among the multiplex crowd. ‘The other side of the screen’ by Sridala Swami meanwhile, explores the relationship between film and the context in which it is viewed, noting that “rituals of viewing” inform the ways in which audiences experience, and therefore perceive films. In addressing issues of perception and reality, Himal Southasian recently met with filmmaker, researcher, writer and activist Tanuja Thurairajah to discuss the ways that film can play a meaningful role in Sri Lanka’s political discourse, noting the manner in which the ‘politics of memory’ has served to distort past realities. In addition, ‘Staging fiction, rewriting history’ by Sinthujan Varatharajah provocatively questions the decision of Salman Rushdie and Deepa Mehta to film Midnight’s Children in post-war Sri Lanka. Indeed, the film’s defacto union with a regime keen to stoke Sinhalese chauvinism should make liberal audiences (ordinarily keen to criticise Hindu and Muslim fundamentalism) deeply uncomfortable. These articles, and more, will be released in the coming days.
For those eagerly digesting their copy of ‘Under the Shadow of the Bollywood Tree’, we hope that this package serves as an appropriate intermission to the main show, while for those yet to procure a copy, these articles should be considered something of a teaser – the opening credits perhaps – of a more robust, 3-D discussion of film in Southasia. With our recently launched online subscription and payment system, it has never been easier to enjoy Himal’s incisive, inclusive and irreverent content. As always, we look forward to your feedback, both pithy and stout, combative and stimulating. For now however, sit back, relax and enjoy the show!
Articles in our web-exclusive package:
More than ‘earnest’ and ‘real’ by Gargi Sen
The other side of the screen by Sridala Swami
Interview with filmmaker, researcher, writer and activist Tanuja Thurairajah on Sharp Relief
Staging fiction, rewriting history by  Sinthujan Varatharajah
Table of content for the print issue.
The Editors
Comments