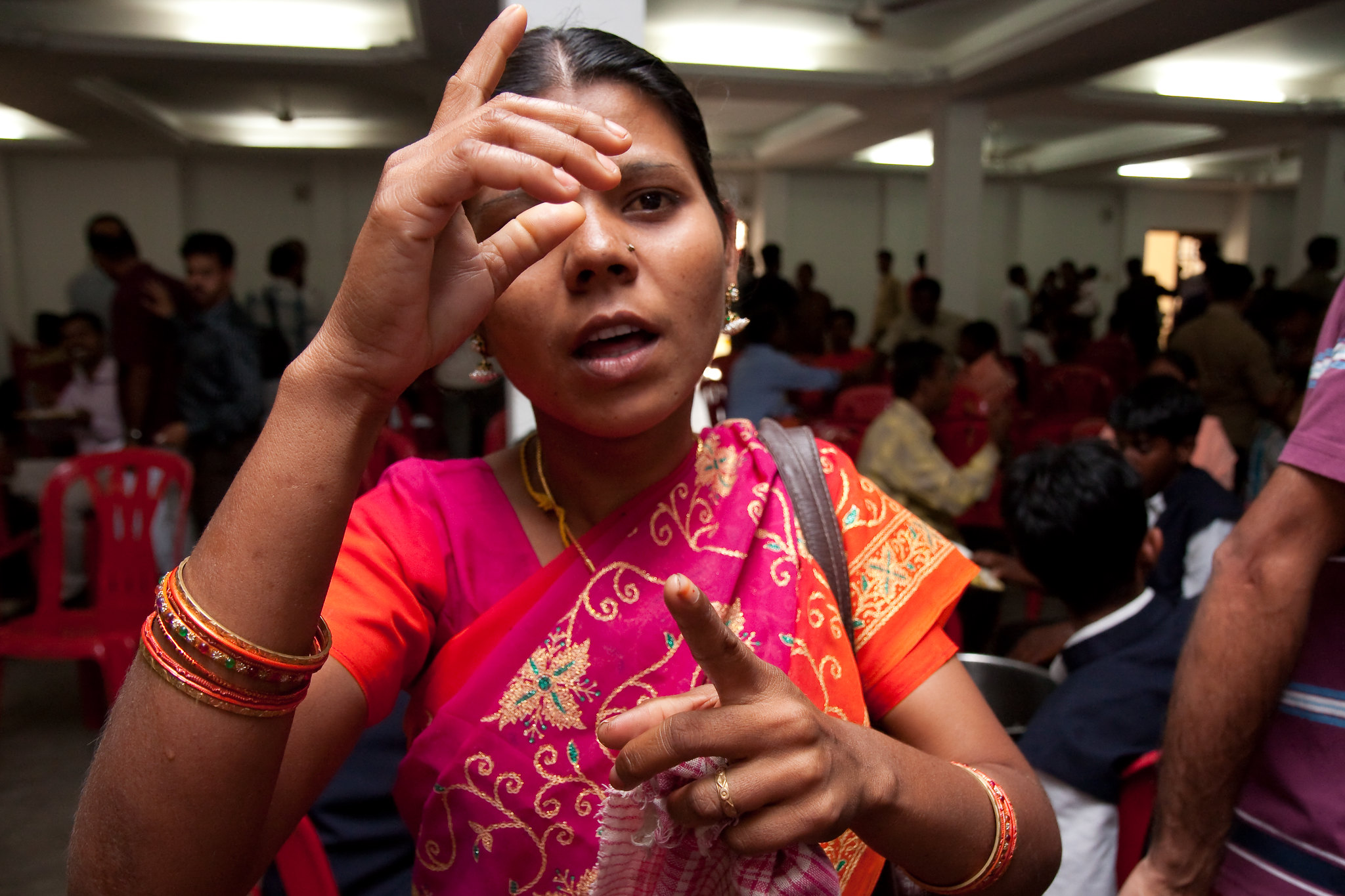 This article is a part of our series Dialectical, which explores the region’s languages, their connections, and shared histories.

Press briefings on COVID-19 by governments around the world have brought sign language interpreters to centre stage. These occasional appearances highlighted the existing gaps in accessibility for people with impaired hearing and verbal abilities. Although many of the world’s languages are spoken, some are produced by hands, face and body. Sign languages emerge naturally among deaf communities and use visual-kinaesthetic modalities. Unlike spoken languages, which are primarily perceived auditorily, sign languages are perceived visually.

Even though the world’s many sign languages are progressively becoming visible, sign languages in Southasia are still languishing in obscurity. Academic discussions around sign languages of Southasia perhaps originated in anthropological research done by colonial officers of British India. In the early 20th century, English anthropologist John Henry Hutton discovered that among the Angami Nagas living in the northeast of India, there were some sign languages used by deaf as well as hearing persons. Naga Hills are known for their rich linguistic as well as biological diversity, and sign languages may have developed to bridge the gaps of inter-village communication, hunting and gathering. This development might also be attributed to an extremely high rate of congenital deaf-mutism in Angami villages in British India.

Sign languages are fully developed, rule-governed linguistic systems that have their own grammars which are not dependent on spoken languages and can express anything.

Indian Sign Language (ISL) is indigenous to the Subcontinent, and its varieties are used in all corners of the region. ISL has a complex linguistic structure of its own and is not based on any spoken language such as Hindi, Urdu, Marathi, Telugu, or English. There are more than six million users of ISL in Southasia, according to a 2021 database of languages by Ethnologue (a regularly updated encyclopedic book cataloguing all of the world’s known living languages). Sign language communities in the Indian Subcontinent use a two-handed manual alphabet like British Sign Language (BSL). Some of the major varieties of ISL are based in urban centres of the Subcontinent, such as Bengaluru, Delhi, Karachi, Hyderabad, Mumbai, etc.

As a subcontinental language, ISL also shares linguistic features with other languages of the Southasian linguistic area. For example, the basic word order of ISL is subject-object-verb (SOV). Other key linguistic features of ISL are as follows:  it uses postpositions; ie, relational words are placed after nouns contrary to prepositions (in, on, near, behind etc.), which are placed before a noun. Similarly, possessive adjectives are placed before the nouns: eg, my book, their hands etc; but other adjectives are often placed after noun: eg, book is new; and modal verbs, such as, can, may etc, are placed after the main verb.

Although the Rights of Persons with Disabilities Act (2016) enacted by the Indian Parliament recognises sign language as a means of communication, there is a long way to go before the linguistic human rights of the deaf are realised. In 2020, the Indian government approved the National Education Policy (NEP), which aims to formalise and standardise Indian Sign Language (ISL). One of the institutions engaged in standardisation of ISL is the Indian Sign Language Research and Training Centre (ISLRTC), which the government of India established in 2011. It has published an Indian Sign Language dictionary of 10,000 hand signs related to general, academic, legal, administrative, medical, technical and agricultural domains. It also released an ISL learning app named SignLearn.

Pakistan Sign Language (PSL) is the native sign language of the deaf community in Pakistan and is used by 600,000 people. It is also known as Isharon Ki Zuban. It has several regional varieties which are not always mutually intelligible. Institutions such as the National Institute of Special Education (NISE), Anjuman Behbood-e-Samat-e-Atfal (ABSA), Pakistan Association of the Deaf (PAD), Family Educational Services Foundation (FESF) and others are actively engaged in standardisation of PSL. FESF (Pakistan) has released a PSL dictionary and a learning app. Pakistan Sign Language has adapted the Urdu alphabet with 38 handshapes for fingerspelling.

On the other hand, Nepali Sign Language (NpSL) is believed to have emerged among deaf children studying in the first deaf school of Kathmandu (Nepal), established in 1967. NpSL could be thought of as a product of interaction between several of the regional sign languages of Nepal. Like other major sign languages of Southasia, NpSL also follows the word order of subject-object-verb (SOV). According to Ethnologue, 20,000 deaf signers are using this language. The 2015 Constitution of Nepal recognised the right to have education in sign language for the deaf in the country. In 2021, the National Federation of the Deaf Nepal (NDFN) released an NpSL learning app named Mero Sanket to develop pre-literacy, reading, and basic sign language skills.

Although the Rights of Persons with Disabilities Act (2016) enacted by the Indian Parliament recognises sign language as a means of communication, there is a long way to go before the linguistic human rights of the deaf are realised.

Bangladesh Sign Language (BdSL) is the native sign language of Bangladesh. In 1994, National Centre for Special Education published a dictionary of BdSL. A Dhaka based organisation Centre for Disability in Development (CDD), published Ishara Bhasy Jogajog which has now become the current standard for BdSL signs.

According to the Sri Lanka Federation of the Deaf, there are over three hundred thousand Deaf people in Sri Lanka. As per current estimates, more than 100,000 signers in Sri Lanka use Sri Lankan Sign Language (SLSL). There are lexical differences between sign language used in Colombo and the north of the country. In 2021, the Sri Lankan government approved a proposal to make sign language a recognised means of communication.

Some of these lesser-known sign languages are not only endangered but are also undocumented.

Alipur Sign Language (APSL) is an endangered sign language spoken in a small village named Alipur in the Chikkaballapur district of Karnataka state (India). In a village of around 20,000 people, around 150 individuals are congenitally deaf and use APSL to communicate. This sign language is unrelated to other signed and spoken languages in the region like ISL or Kannada. Due to the high proportion of deafness in the village community, APSL is also used by hearing individuals. APSL has existed for at least six generations.

Shillong Sign Language (ShSL) is a developing sign language signed by a deaf community living in Shillong city, capital of Meghalaya. It has emerged because of contact and convergence between home signs of deaf children with ISL. In ShSL, the word order is subject-object-verb, like the other ISL varieties. A multimedia lexicon of ShSL has also been published.

Pakistan Sign Language (PSL) is the native sign language of the deaf community in Pakistan and is used by 600,000 people.

Some of these lesser-known sign languages are not only endangered but are also undocumented. More research is needed to document these sign languages to broaden our understanding of the possible range of structural diversity in sign languages.

Watch the national anthem of Sri Lanka in sign language.

Sign languages are minority languages in Southasia, and the social stigma attached to deafness has led to even more marginalisation of these sign languages in public. As a result of this, many of the rural and locally used sign languages are critically endangered. Although urban sign languages have survived because of some institutional support, due to lack of awareness and sensitisation, deaf children are often discouraged by their parents to use sign language in public settings. In recent years, sustained campaigns by advocacy groups across Southasia have led to an increasing number of sign languages receiving official recognition and support. For sign language communities living in Southasia, a holistic language policy is imperative for protection against negative stereotypes of signed languages and the deficit view of disability that subjects deaf people to neglect and lack of accessibility. Southasian sign language communities will be able to advance with their demand for language recognition and protection as a linguistic human right if they have the right partners, legal tools and solidarity from others.