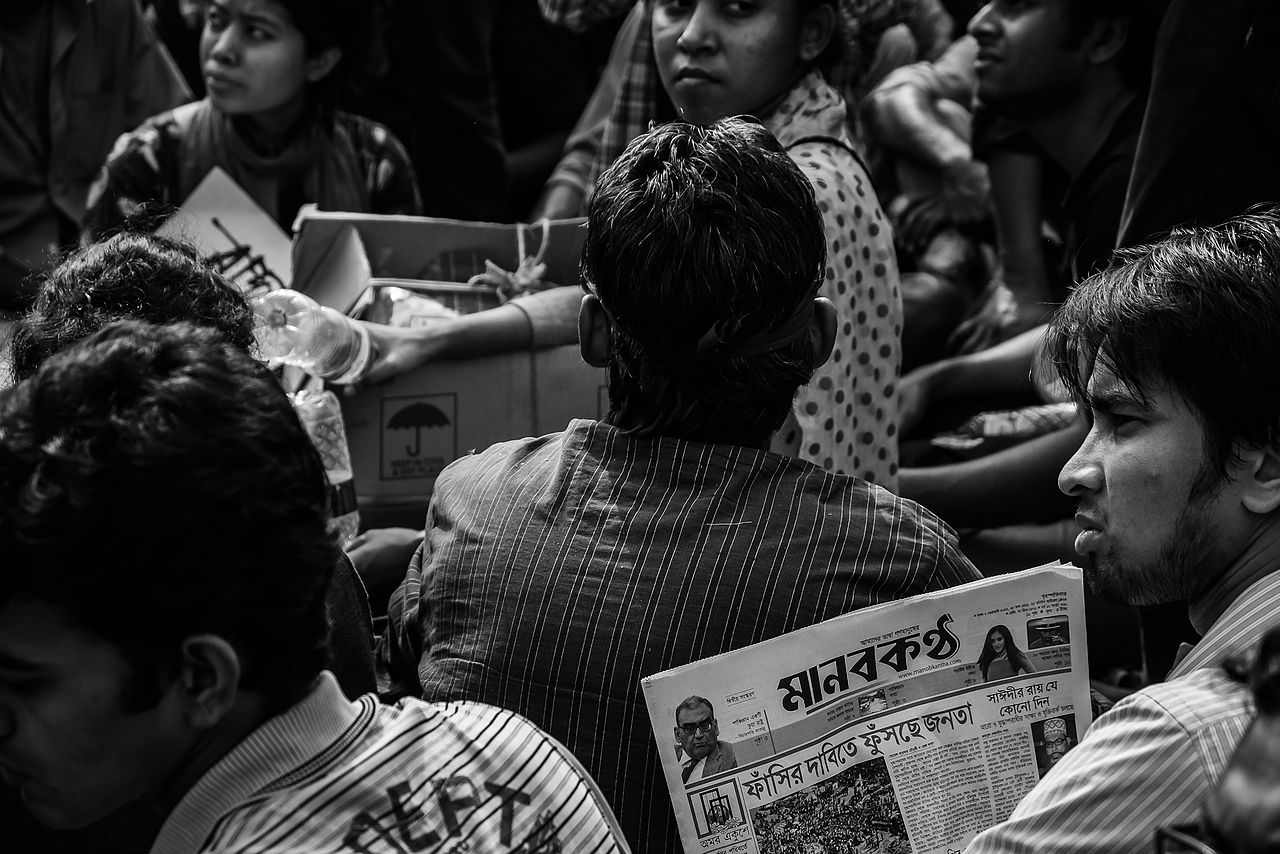 Prior to the outbreak of the recent violence in Bangladesh that pitted the police against the Jamaat-e-Islami, the conservative Islamic party, there was a stark silence among Western news outlets on the massive protests at Shahbagh junction in Dhaka. For 38 days and counting, up to a quarter of a million people have gathered peacefully everyday at Shahbagh, and elsewhere across the country, to demonstrate in favour of death sentences for those convicted of war crimes dating back to the country’s 1971 Liberation War against Pakistan. Shahbagh, and the subsequent violent backlash, was sparked by sentences handed down to leaders of the Jamaat, which collaborated with Pakistani forces in 1971 and has been tightly enmeshed in Bangladeshi politics ever since.

At the heart of the Shahbagh movement is a debate raging throughout the Muslim world: what is to be done with religion in politics? The assessment is complex and, in places, bleak. Analysis based on the Gallup World Poll’s multi-year study shows a complex picture. By and large the citizenry of Islamic-majority nations seem to want religion to be a part of their daily lives, yet the magnitude of desire for religious influence in public policy seems unclear. The tide, however, appears to be moving in the direction of greater religious-orientation in governance. Electoral results in Turkey, for instance, show the religious AKP party winning landslide victories in 2002 and onwards. In Iraq’s 2005 general elections, the religious Shiite alliance won 128 of the 275 seats in parliament. Alternatively, authoritarian regimes have used public fear of Al-Qaeda and ‘terrorism’ as a means to repress and control the actions of opposition parties. Yet the Gallup World Poll also shows that only in a few of the countries polled did the majority support Sharia as the only source of legislation; it should be noted that Bangladesh was one of them. This complex situation requires nuanced analysis and presentation in the media.

By choosing to cover only the ensuing violence and not the wider movement in Bangladesh, Western news media risks complicity in providing a simplistic view, thus distorting Shahbagh’s true nature and its significance. Even as Bangladesh may be witnessing a new kind of uprising, those of us watching from the West are witnessing another case of journalistic negligence. Without sufficient context and explanation, a movement built around calls for the deaths of a group of men, coupled with a focus on reporting violence, may continue to feed the apocryphal narrative of Muslims as a bloodthirsty mob. In the context of Bangladesh’s political polarisation and broken justice system, where life sentences delivered today can be pardoned after the next election, the demand for justice through death engenders a much more complex debate than the simple narrative of vengeful mobs in the streets allows. The American Revolution, let us remember, wasn’t just the story of a mob angry about tea prices. And whatever Bangladeshis’ initial reasons for taking to the streets were, Shahbagh has morphed into a broader and far more significant movement, with larger geopolitical relevance requiring deeper media analysis.

Arguably, the Shahbagh movement, mobilised in part by a group of bloggers and online activists, owes much to other global uprisings such as the Occupy and Arab Spring protests. But Shahbagh has also set into motion something new. Over the last decade, Bangladesh has overcome the stereotype of a nation of constant poverty and flooding. It is now recognised as a Muslim-majority nation where the general public has demonstrated that citizen-driven social change is both possible and effective. Shahbag falls within this Bangladeshi continuum of social action, which includes some of the world’s most successful and original non-governmental organisations in the shape of BRAC and the Grameen Bank, as well as citizen-led movements such as Phulbari that have legally overturned damaging contracts with multinationals. While Shahbagh shares certain methods of mobilisation with its foreign cousins, it is still a uniquely Bangladeshi and secular phenomenon. In short, what is happening in Bangladesh is an open revolt against fundamentalism and to some extent against religion, in politics. If similar currents are to be encouraged elsewhere in the Muslim world, covering the Shahbagh protest should be a priority for the international media. So one can’t help but wonder, where are the Anderson Coopers and their global TV news networks, who devoted so much attention to Tahrir Square? Why is Shahbagh almost entirely absent from Western news coverage?

Ignored moderates
Such journalistic negligence belittles Bangladesh’s moderate majority, and so the Muslim nation continues to be defined by its extremes and not its reality. In this sense, the Western media’s coverage of Shahbagh is not particularly inconsistent with what we have seen during the Arab Spring. Analysis by the Pew Research Center, a US think tank that monitors media trends, offers a revealing narrative of US coverage. Between December 2010 and February 2011, there was a surge in reporting on the events leading to the Egyptian uprising. In February, the reporting on the Tahrir Square protests reached a dramatic crescendo, taking up 22 percent of the US news cycle in the leadup to Hosni Mubarak’s removal from power. In the weeks following, when it could be argued that the greater story was just beginning, news coverage on Egypt and its continuing socio-political movement declined precipitously. The Arab Spring story mostly fell off the radar, occupying less than one percent on average of the news for the remainder of 2011. From there onwards into 2012, the story became almost entirely dominated by Syria, with violence co-opting and thus obfuscating the narrative of the Arab Spring.
After being criticised for its impartiality and undelineated use of ‘User Generated Content’ in reporting Tahrir Square, the BBC Trust’s own investigation concluded that its coverage required more “breadth and context”. On Libya as well, there were questions over the strong emotions and opinions driving parts of the BBC’s coverage – an “over-excitement” in the reports from correspondents caught up in fast moving events. While it cannot be condoned, journalists covering historic events will almost inevitably be influenced by the story of the winning side – particularly when it feels like that is the side history might agree with. When the feed of raw information comes fast and furious – as tweets, Facebook posts and cellphone-generated videos –assimilating the data into coherent reporting is no doubt a daunting task. However, underlying uncritical reportage is the a priori narrative the journalist has gone into the field armed with, looking only to find evidence for a story already written.
Consider the case of the elusive ‘Muslim Moderate’ in Western news. Talk show hosts, columnists and op-ed writers frequently ask where the moderates of the Islamic world, who are somehow obligated to protest the status quo, are. Where, they ask, are the folks who should rise up and condemn the acts of fringe, extremist players? This has been a recurring theme from the coverage of the Salman Rushdie fatwa to the controversy over cartoons of the Prophet Mohammad and the anti-Muhammad Youtube trailer. The same question is looped back each time a new ‘terrorist’ case enters the news cycle in the United States.
If we take this querulous question seriously for a minute, where indeed are the moderates? They are at Shahbagh.
Consider first the sheer size, nature and attitude of the Shahbagh movement: a largely peaceful and progressive movement. Shahbagh is not, in magnitude or in demographic variety, a drop in the bucket; it is broad-based and covers a great swath of secular Bangladesh. Second, and perhaps most important, Shahbagh is in many ways a post-Tahrir Square phenomena in that it is about not installing an Islamic Brotherhood or some equivalent, but precisely about removing religious ideology from politics altogether. One would expect that, rather than being neglected by the news media, this story would be promoted as an example of a popular uprising against repressive ideas. Shahbagh is about secularism rising up against the forces of orthodoxy and fundamentalism. Yet many of the same analysts who eagerly supported Tahrir Square seem complicit in shoving Shahbagh under the rug.
Soon enough it will be business as usual on the news – the crouching reporters, images of burning cars, dead bodies and men with long beards. Rarely is it mentioned that the majority of clashes in Bangladesh have been between marauding members of the Jamaat and the police. Meanwhile, the Jamaat party, drawing from a well-choreographed and well-worn playbook, continues to do what it does best: create chaos in the streets, and through violent repression to push away peaceful new entrants onto the political scene. The presupposed narrative of angry mobs and religious extremists fulfills and perpetuates itself when the only ones left standing are the fanatics.
It is time to rethink the traditional narrative of Muslim countries in the Western media, and to look closely not only at places like Shahbagh and Bangladesh, but also at international newsrooms. It is time to expose religious fundamentalists who continue to act the victim while using unfair western narratives as a convenient cover, even as they create strife in Bangladesh and jeopardise any chance of real change.
~Javed Jahangir is a Boston-based Bangladeshi writer and blogger. He blogs at Beyond the Margins and AlalODulal.org.
Javed Jahangir
Topics : Bangladesh, protest, shahbagh
Comments