Viral Islamophobia, economic crisis and food security, and how COVID-19 has impacted legislatures in Southasia. 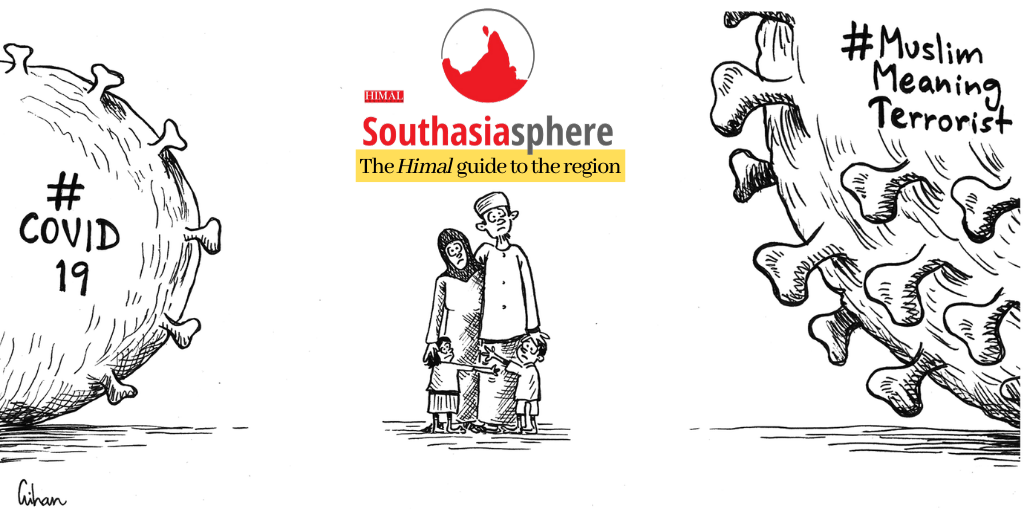 This is the third edition of Southasiasphere, our guide to developments from the region. We’ll be monitoring the region to bring you fortnightly updates on political, legislative, economic, environmental and diplomatic events. Our aim is not to flood you with information, but provide clear analysis and outlook. On our radar are not just headline-grabbing news, but also stories ignored by corporate media both within and outside the region. As this comes at a critical time of global pandemic, when many seek reliable information, we’re making Southasiasphere free to all for now. Do check out our membership plans and support our work.

Updates on parliaments in Southasia

As the region grapples with the spread of COVID-19, an older and chronic malady has reared its head, with an uptick in Islamophobia reported across the subcontinent. Far right groups and a significant section of their supporters have managed to weaponise the ongoing crises to further anti-Muslim sentiment in the region.

In India, the Tablighi Jamaat, an Islamic missionary group that went ahead with a gathering in Delhi in early March despite the COVID-19 outbreak, has been dubbed ‘super-spreader’ after a number of cases were traced to the event. This has resulted in widespread vilification of Muslims, ably abetted by the mainstream media. India Today, a prominent magazine, published a crass Islamophobic infographic while several TV channels insinuated that the gathering was part of a ‘corona jihad’.

In Nepal, the press uncritically reported a conspiracy theory from a leaked letter written by officials in Bihar, which alleged that a Nepali Muslim politician, with Pakistani support, was looking to spread the pandemic in India by sending COVID-19 infected individuals across the border. Islamophobic reporting has also seen an increase following the positive testing of three Indian nationals staying at a mosque in a border town. The absence of serious pushback from liberal sections of the media was equally worrying, as the crossborder Hindu right aims to communalise the outbreak.

In Sri Lanka, Derana TV broadcast an interview with a public-health official who said the country would have been able to celebrate the Sri Lankan New Year (in mid-April) had it not been for the last three patients, who were Muslim (he has since apologised). On a popular talkshow, caught offscreen, a guest speaker suggested that the majority of COVID-19 patients were Muslim. The anchor responded to quoted statistics saying, “Definitely we must attack… I had a chance to attack during the morning show with that.” There has also been controversy surrounding death rites of those who have died of COVID-19. The Ministry of Health recently mandated that all such bodies had to be cremated, distressing the Muslim community who usually bury their dead. A group of Muslim organisations have flagged hate-mongering targeting the Muslim community, including audio clips urging the public to boycott Muslim-run businesses.

Conversely in Myanmar, Muslim communities have acted preemptively, in what is likely a bid to prevent Islamophobia, with Islamic organisations offering to transform mosques and religious schools into treatment centres for COVID-19 patients, should the need arise.

Southasia is entering uncharted economic territory, as it braces for COVID-19’s impact. The World Bank has significantly revised its forecasts for Southasia, downgrading the growth rate for the region from estimated 6.3 percent to between 1.8 and 2.8 percent in 2020. Several countries are expected to go into deep recession, and Southasia will likely face its worst economic performance in the last 40 years.

The Maldives is expected to be badly affected, since much of its income relies on tourism (with the service sector expected to be hard hit). Countries relying on the garment sector, like Bangladesh and Pakistan, will be impacted not just by supply-side disruption from China, but also by a drop in exports due to sharply reduced international demand. The flow of remittances may be affected too, even if workers abroad manage to send money back home, especially with financial services remaining shut thanks to countrywide lockdowns. Afghanistan and Sri Lanka will also face recessions, which will likely deepen inequality in both countries.

Apart from the immediate need to support the health sector, governments must consider another, equally urgent need – food security.

In Karnataka, India, for instance, there has been a 40 percent drop in demand for fruit and vegetables, with around 70 percent of farmers affected according to farmers’ organisations. While the government has introduced measures to cushion the blow, farmers worry about limited reach.

Nepal may face food shortages too, with much of its food, fuel and essential imports usually entering the country via India (though at present, food and fuel trucks are being allowed to cross the border). This could affect 4.6 million Nepalis who are already food-insecure.

Following the announcement of a shutdown, the government of Myanmar announced it would provide food parcels to those without regular income. But the programme only includes those who don’t run a business, receive remittances from abroad, or own livestock, among other restrictions. It remains unknown whether the programme would reach all those in need.

Bangladesh said it would not face shortages, thanks to bumper harvests. However, financial advisers pointed out the real challenge will be ensuring equal access as well as maintaining steady prices.

Meanwhile, the Food Corporation of Bhutan has been given funding to stockpile essential food items, and a new fund will be launched to support those who have been laid off or placed on reduced salaries.

With prolonged lockdowns expected across the region, many families face the prospect of starvation and soaring prices. Will Southasia be able to stave off hunger?

In session or not?

As COVID-19 disrupts not just the lives of the citizens but also those who run the state, we wanted to check what the legislatures in the region were up to. Here’s a quick compilation showing which parliaments have been called off, which are still running, and which have opted for an online solution to the crisis.

Scholars and activists Anand Teltumbde and Gautam Navlakha were arrested in India (ironically, on Ambedkar’s birth anniversary), after the Supreme Court denied them bail over widely disputed charges of instigating violence and conspiring against the state.

Media organisations in India feel the financial pinch as several media houses begin laying off employees or placing them on indefinite leave as a result of COVID-19.

Nepal’s Supreme Court has directed the government to repatriate vulnerable nationals abroad, as news of Nepalis stranded or at risk of being so grows.