Militarisation of COVID response, the looming refugee crisis, and Nepal’s PM under pressure. 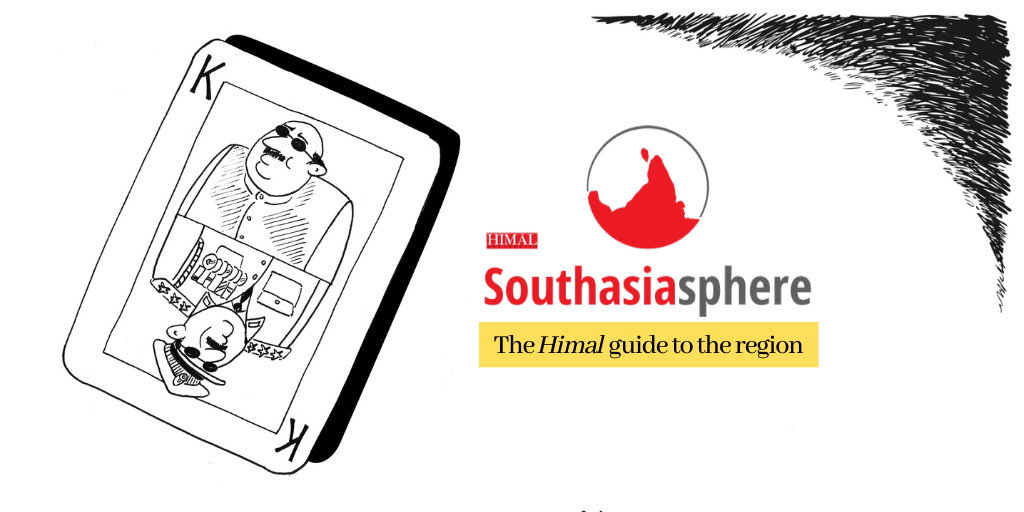 As is often the case with crises and disruptions, COVID-19 has revealed the outsized role that militaries play in Southasia, particularly during emergencies.

In Myanmar, the formation of a COVID-19 task force headed by First Vice President Myint Swe, a former general with a history of crackdowns, has caused concerns about the Tatmadaw’s growing powers. The task force pointedly did not include Aung San Suu Kyi nor the health minister, and appears to be a response to another national COVID-19 committee headed by Suu Kyi that was formed in March. The sweeping powers of this military-led taskforce, which includes making arrests for spreading ‘fake news’ and ‘disinformation’ have led many to view this as a move that harks back to the pre-2010 junta rule. This also comes weeks after efforts to reduce military power through constitutional amendments in the Parliament met with failure.

In Pakistan, the country’s military has effectively sidelined the Imran Khan-led government on the COVID-19 response, after it announced the deployment of troops across the country to oversee a shutdown on 23 March. This was less than 24 hours after Prime Minister Khan refused to initiate a lockdown, arguing that doing so would lead to unemployment and starvation. Khan’s dithering has since received much public criticism, given the escalating number of cases in the country (with over 15,000 cases reported as of 30 April). What might be political embarrassment for Khan has, however, undermined the credibility of civilian government and could be a serious setback for democracy in Pakistan.

In Sri Lanka, where the current president is also a former defense secretary, relations between the government and the military appear to be more cordial. But that is not surprising given that a high number of military personnel (current and retired) have been appointed to bodies formed to tackle the outbreak. The national centre set up to oversee the COVID-19 response is headed by the country’s army chief, even as representatives of health professionals have reportedly expressed reservations. The centre has expansive powers and several trade unions have called for civilian oversight to the taskforce with little response. A retired military official oversees the COVID-19 relief fund, and one-fifth of the members of the presidential task force formed for post-COVID economic response are from the armed forces. Continuing military involvement in civil administration post-war has been a worry for many, particularly for the Tamil community. And several retired military officials had been promoted to traditionally civilian positions even prior to the outbreak. 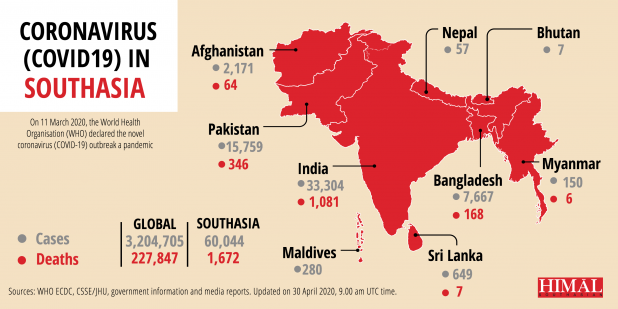 The images of two fishing trawlers stranded in the Bay of Bengal last week were a harsh reminder of the plight of refugees for whom COVID-19 will be another in a series of tragedies. Around 500 Rohingya refugees onboard were turned away from Malaysia, which has imposed restrictions on boats in light of the pandemic. Bangladesh, too, refused to let them in, adding that they had taken in more than a million Rohingya already. Those who were rescued in mid-April from another boat spoke of limited access to food and water, and described individuals being thrown overboard from overloaded boats. As of 22 April, as many as 1000 refugees are at sea, and latest reports indicate the boats are now out of sight.

In Bangladesh, access to Cox’s Bazar, which houses several refugee camps, has been restricted, and refugees in the camps say supplies are hard to come by, with markets closed and people confined to their homes. The UN High Commission for Refugees (UNHCR) is constructing isolation and treatment facilities, and working with refugee volunteers. But with an estimated 100,000 people packed into a square mile and limited access to soap and water, people are worried about a potential COVID-19 outbreak (one person has already tested positive in the area).

Pakistan has been seeking aid to deal with an impending humanitarian crisis, with food shortages affecting the estimated 2.8 million Afghan refugees in the country. In desperation, tens of thousands of Afghans chose to return home via the Pakistan-Afghanistan border. At least another 130,000 returned from Iran, until the UNHCR suspended support for voluntary repatriation, fearing an outbreak that might overwhelm Afghanistan’s health-care system.

An estimated 80 percent of the world’s refugees and internally displaced people are located in low- to middle-income countries that often have underfunded and overburdened healthcare systems. Cramped living conditions, shortages of essential supplies and the near impossibility of finding daily-wage work will be particularly hard on these groups.

A series of hastily passed controversial ordinances have brought Prime Minister K P Oli under increased public scrutiny and pressure, including from within his party. With the Parliament out of session due to the COVID-19 outbreak, the cabinet pushed two legislative amendments, one of which made it easier for political parties to split, while the other allowed the Constitutional Council – a body tasked with making appointments to statutory bodies – to make decisions in the absence of the opposition leader. Rival parties and critics have since accused the government of opportunism and undemocratic politicking.

Equally notable is the growing rift within the ruling Nepal Communist Party. Reports suggest that PM Oli went ahead with the ordinances, despite opposition from several cabinet members as well as sections of his party. Meanwhile, party factions led by senior leaders, including former prime ministers, have increased pressure on Oli to step down. In response, he has proposed a change in leadership once the ‘COVID-19 crisis is over’. With no takers to the ambiguous proposal as of yet, the PM’s hold on his party, and the government, appears tenuous.

Facebook invested USD 5.7 billion in Reliance Jio, about 10 percent stake in the company, in a bid to expand its presence in India. Reports indicate plans to leverage WhatsApp and Jio services to create an app similar to the Chinese WeChat.

On 24 April 2020, five years after Karachi-based activist Sabeen Mahmud was killed following an event on the disappeared in Balochistan, her mother released a journal of letters to her daughter.