What you need to know about the political crisis in Colombo. 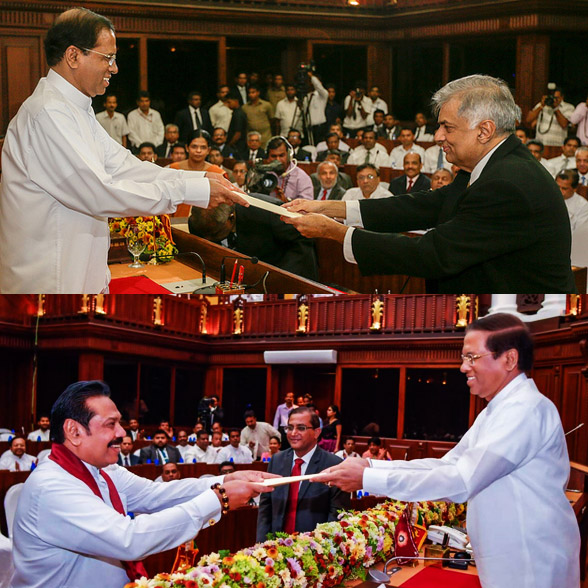 Sri Lanka faces an unprecedented constitutional and political crisis following President Maithripala Sirisena’s move to dismiss Prime Minister Ranil Wickremesinghe and appoint former President Mahinda Rajapaksa in his stead on 26 October 2018, which has been challenged by Wickremesinghe as being illegal.

What explains these sudden political developments, which unseated the political party that had the largest number of seats and commanded majority support in the Parliament? What is the constitutional status of the president’s prime ministerial dismissal and appointment? And what should we expect in the next few days in Sri Lankan politics?

The government was constituted as an alliance between the Wickremesinghe-led United National Party (UNP) and its partner political parties, who together have 107 out of the 225 seats in the Parliament, and the Sirisena-led faction of Sri Lanka Freedom Party (SLFP) and its partners which have 40 seats.

Sri Lanka’s system of governance has an unusual power-sharing arrangement, which is neither wholly presidential nor wholly prime ministerial, but shares power between the two. While the overwhelming balance of power was earlier in the president’s favour, the 19th Amendment to the Constitution in 2015 significantly curbed the powers of the president, making the prime minister more of an equal partner. However, though the amendment has given more teeth to the cabinet of ministers under the direct purview of the prime minister, control of the country’s defence apparatus has remained with the president, who is the commander-in-chief of the armed forces – a significant factor in a political tussle.

The animus between President Sirisena and Prime Minister Wickremesinghe is not unusual as they belong to political parties which have been traditional rivals. What was more unusual was Sirisena’s decision to leave the Rajapaksa government in 2014 – evidently at great personal risk – to contest the presidential elections against Mahinda Rajapaksa as the common presidential candidate of the UNP-led opposition coalition. Following his victory in January 2015, a grateful Sirisena dissolved the cabinet of ministers and appointed Wickremesinghe as his prime minister, vowing to never allow a return to autocracy. Parliamentary elections followed in August that year, with the UNP emerging as the biggest party but without the required majority. A faction of the SLFP that claimed to support Sirisena crossed over and formed a unity government together with the UNP, with Wickremesinghe as its prime minister.

But the relationship had always been fraught with tensions over the split in the SLFP, the tussle for power in a new political arrangement, and differing approaches to governance. This has been exacerbated by the acrimony between President Sirisena and Prime Minister Wickremesinghe and expressed itself through a series of contentious issues that underlined the government’s non-performance.

While the bond scandal which implicated the UNP – the finance minister was forced to resign though the PM was cleared of wrongdoing – was a major irritant in the uneasy alliance, the resounding victory of the Rajapaksa faction of the SLFP in the local-government elections in February 2018 further widened the rift, perhaps causing Sirisena to reconsider his position.

Despite uneasy relations between the two constituent parties, the coalition remained intact for the most part. Wickremesinghe even survived, quite comfortably, a no-confidence motion in April 2018 with the help of his colleagues in the SLFP. However, things came to a head over an alleged ‘assassination plot’ against the president. While the credibility of the plot has been questioned by UNP leaders, the president has chosen to take the plot seriously, and also blamed a cabinet minister for being party to it.

Reports of discussions between Sirisena and the Rajapaksa-led faction have been rife over the past year. Still, the events of Friday came as a shock. Impelling former President Mahinda Rajapaksa may have been considerations of his own position in any future political dispensation. While the Rajapaksa-led faction appears to be ahead in the electoral stakes – parliamentary elections are due in 2020 – the 19th amendment prevents Mahinda Rajapksa from becoming president for the third time. There has been speculation over whether the former president would like one of his brothers to become the next president or keep the vacancy in place for his son (who is too young to become president in 2020 but will be of age in 2025). By opting for the prime ministerial position, and keeping Sirisena as the president, Mahinda Rajapaksa has ousted his opposition both within and outside his party.

President Sirisena’s move, however, has been criticised not only by the UNP but also a large section of Sri Lanka’s civil society, which has questioned its constitutionality. Following the 19th Amendment of the Constitution in 2015, the president can no longer sack the prime minister at will. The former only has the power to appoint a prime minister if the government loses confidence in Parliament or if that seat is vacated for one of the following reasons: death, resignation, or the ambiguous “otherwise”. Supporters of the move have argued that a discrepancy between the Sinhala and English versions of the Constitution might have some bearing on the issue, particularly if it reaches the Supreme Court.

Unless the UNP decides to take the matter to court – of which there is no indication – the legislature, prorogued by the president till 16 November, appears to be the only site where this constitutional crisis can be resolved. The UNP has sought an early summoning of the Parliament by the speaker, who is a UNP MP.

Until then, what might matter most is where the effective power of the state lies. The armed forces and the police have followed the presidential diktat and, under his command, have reported to the newly appointed prime minister. UNP ministers have been prevented from entering their offices, and there have been changes in the leadership of government-run broadcasters, indicating UNP’s diminishing control over the state apparatus. A new cabinet headed by Mahinda Rajapaksa has also been sworn in.

Sri Lanka’s opposition parties, the Tamil National Alliance (TNA) which holds 16 seats, and the Janatha Vimukthi Peramuna (JVP) which holds 6 seats, have so far been cautious and refused to take sides in the current power struggle. However, both parties have called for Parliament to be summoned and have condemned Sirisena for proroguing the sessions. With Rajapaksa and Wickremesinghe both manoeuvring to gain a simple majority, analysts are predicting crossovers away from the UNP during this period. International criticism has been muted, and only the United States, the United Kingdom, Canada and the European Union have urged the president to immediately reconvene the Parliament.

Perhaps most critical is the 2019 budget. Analysts note that Sirisena could have avoided a political crisis by simply waiting for the UNP to present its budget and defeating it in Parliament, which would have provided clear legal grounds to remove the prime minister.

While the UNP is in discussions to begin an impeachment process to unseat President Sirisena, it may not do so, as this would require a two-thirds majority in Parliament, much greater than the simple majority Wickremesinghe needs to legitimise himself as prime minister. The real test will lie in the days ahead when Parliament meets – whether over the next few days as sought by the UNP, or on 16 November, in keeping with the presidential decision.