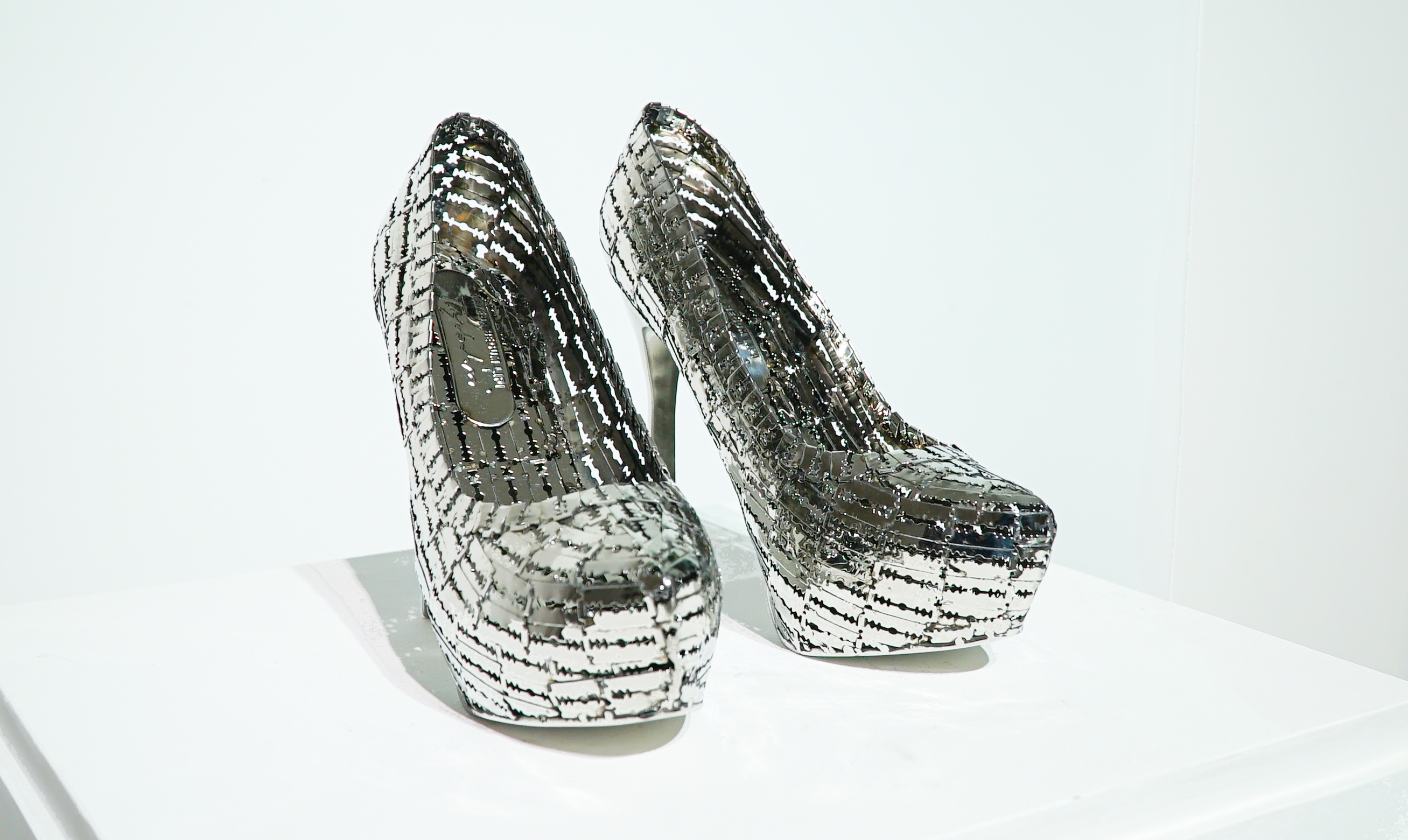 Artist Tayeba Begum Lipi’s works, at display in Delhi’s Shrine Empire Gallery from 28 January to 2 March 2019, are razor sharp – quite literally. Formed from the scaffolding of steel blades and safety pins, they are arranged to resemble stilettoes, handbags, inner wear, dressing table, to name a few. The exhibition, titled ‘Vanity Fair’, aims to capture the pain and violence experienced by women in Bangladesh and beyond, by juxtaposing the violent threat of these objects, traditionally associated with the feminine, with the metallic gloss of consumer choice.

Born in Gaibandha, Bangladesh, in 1969, Tayeba Begum Lipi did her Master of Fine Arts in Drawing and Painting at the University of Dhaka. Over the years, her artistic interventions have tried to subvert narratives that deify women as self-sacrificing figures while keeping them at the fringes of history. An award-winning artist, Lipi’s works have been exhibited all around the world, and she has curated several projects. She is also a co-founder of the Britto Arts Trust, a Dhaka-based artist-run collective that supports the country’s artists through funding, exhibitions, dialogues and residencies.

The following interview has been edited for concision.

Dilpreet Bhullar: Your body of work has consistently been about the art of resistance against commodification, a term that finds resonance across the realms of both gender and economics. How does your latest exhibition ‘Vanity Fair’ adds to this narrative of defiance?

Tayeba Begum Lipi: The exhibition ‘Vanity Fair’ has two parts that speak to each other. For the first part, I have switched my position as an artist with that of a viewer. From the vantage point of a viewer, I interrogate the network of commodification and art. But at the end of the day, I cannot escape from the fact that my artwork also turns into a commodity once it reaches the art market.

Secondly, in the current times, when freedom of expression is under constant threat, could our inner expressions of desire and freedom be derivatives of the commodity market? For me, the best way to give wings to your inner being is to wear it as an outfit and let people see it and read it. Similarly, for me, my work is an extension of my inner being. ‘Vanity Fair’ showcases both the parts in a parallel but conceptually shared platform.

DB: The tensions seen in the private-public, pain-strength, and endurance-triumph dualisms is interestingly manifested in the material used in your artworks: the razor blade. I feel the title of exhibition ‘Vanity Fair’ is a hint towards the same binary. Could you elaborate further on this?

TBL: My works usually juxtapose the visual reality and (very personalised) political reality. Psychologically, the deadly sharpness of the material keeps the viewer at a distance from the art piece, but at the same time, the shine and its beauty pulls the person towards the work. Right after seeing my work, viewers have expressed this presence of a grey area between resistance and acceptance. Out of this shiny sharp puzzlement, the works speak for itself. As my works are very straight forward, in most cases, the engagement between the work and the viewer becomes an obvious point of finding commonalities that paves the way for conversations.

DB: For an artist who draws inspiration from her personal life, what do you think of the statement “the personal is political”?

TBL: I completely agree with it. If you go through my body of work, you can easily find that there are lots of indirect personal references vis-à-vis sharp wit and incisive humiliation, which, in fact, suggest a certain kind of political assertion. Not only the objects that I create, but my videos as well quite often carry a sense of self-observation laced with a politics of gender. Just to add here, I don’t necessarily only speak about my story or of the experiences I have had. As a good listener and, sometimes, perhaps as a good advisor, I try to lend an ear to women from my surroundings, especially from family and friends. These add-on personal stories in my life contribute to relatively larger political statement of a community.

DB: Could you talk about your childhood and what led you to choose art as a serious profession?

TBL: I was born and brought up in a fairly large family in a small town in the northern part of Bangladesh named Gaibandha. There were multiple layers of stories that I used to hear from close and distant families, as well as from friends since my childhood. I am the 11th from the 12 children my parents had and grew up in a very liberated and cultured family environment. One of my brothers insisted on getting me admitted into the art school at Dhaka University, while my immediate elder brother was already studying visual arts. I used to play music, recite poetry and draw or copy things, but never dreamt of becoming an artist someday. I always wanted to be a journalist and a writer.

DB: Is ‘Vanity Fair’ the first time that a Bangladeshi woman artist has had a solo exhibition in New Delhi? Is it something that will encourage more women artists to showcase their work?

TBL: This is not the first solo exhibition of a Bangladeshi woman artist in Delhi. Women artists from Bangladesh have done their solo shows in India and abroad before. In fact, I had a solo show titled ‘Reversal Reality | Project_2015.03’ with Shrine Empire Gallery in 2015, which ran for a month. I have done solo exhibitions in New York City, London and Istanbul in past. We do not have a large number of active women artists in Bangladesh, but a number of contemporary and modern women artists are showcasing their works outside the country over the decades.

DB: Would you agree that, in recent years, Bangladeshi art and artists have made their presence felt on international art platforms?

TBL: Yes, undeniably, Bangladeshi contemporary artists have carved a niche for themselves and they are making their art enviable in the current global art scene. Organised by Britto Arts Trust, Bengal Foundation and Gervasuti Foundation, the first-ever Bangladesh Pavilion at the 54th Venice Biennale in 2011 was a ground-breaking attempt to receive international visibility with huge acceptance and respond to the participating artists. Dhaka Art Summit (DAS) has also brought a lot of interest in Bangladeshi art and artists. Especially after its second edition (2014), DAS ushered in a wave of immense international interest in Bangladesh. Over the years, the galleries have been representing a number of Bangladeshi artists globally. If I take an example of Britto Arts Trust, in the past ten years, as its co-founder, I have closely seen how many of its members have participated in different biennales and art festivals across the world.

DB: Given your experience at the Britto Arts Trust, do you think collaboration is key to a successful artistic expression?

TBL: Yes, I think collaboration is key to extend artistic expression. Growing as an individual artist, in a rather limited art scene in Bangladesh, could leave you short of significant achievements. If one does not grow along with his/her contemporaries, the isolation could limit the growth of an artist. As alternative art practitioners, my partner artist Mahbubur Rahman and I always thought about the crucial need for an unconventional platform that would act as a catalyst – supporting and promoting new ideas, a place where artists can share and exchange their thoughts. Since 2002, Britto Arts Trust has been consistently working for the development of alternative and dynamic art practice in multiple ways. I believe the endless collaborations opened my eyes to a new world, and made me the person I am now, as an artist and as a human being.

DB: Where do you see your work in the spectrum of contemporary art in Bangladesh or Southasia? Do you see it as part of a lineage or a break from existing traditions?

TBL: I think it is hard for me to justify my own work. I would rather give the platform to art researchers or writers to discuss or initiate new discourse around it. I only know that I am blessed enough to be accepted by the art connoisseurs globally. Of course, this somewhat makes me feel like I must have broken existing traditions and formed an unprecedented language that was contemporary yet rooted in Bangladeshi cultural traditions.

DB: Could you let us know more about your forthcoming projects?

TBL:  I am working on my forthcoming exhibition titled ‘This Is What I Look(ed) Like’, which is scheduled between May-June 2019 at Sundaram Tagore Gallery, New York City.

Dilpreet Bhullar is a writer based in New Delhi. Her essays on visual ethnography, identity politics and partition studies have been published in books and journals, including Voices and Images, South Asian Popular Culture, Violent and Vulnerable Performances, Indian Journal of Human Development and digital archive Critical Collective. She is the associate editor of Visual Arts Journal, published by India Habitat Centre, New Delhi.