India's Street Vendors Act could be a big leap forward for those it seeks to serve, but important gaps must be filled during its implementation. 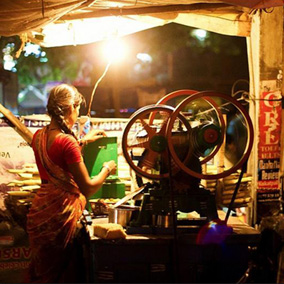 India’s Street Vendors (Protection of Livelihood and Regulation of Street Vending) Act, 2014, received presidential assent on 4 March, thereby legitimising street vending as a lawful pursuit. The Act defines a street vendor as “a person engaged in vending of articles, goods, wares, food items or merchandise of everyday use or offering services to the general public, in a street, lane, side walk, footpath, pavement, public park or any other public place or private area, from a temporary built up structure or by moving from place to place.” The National Policy on Urban Street Vendors, 2004, which was the predecessor to the revised National Policy of 2009, estimated that there are approximately 10 million street vendors in the country. The services they provide to the urban poor, by offering food and essential commodities at affordable prices, are often overlooked. Instead, street vendors are perceived as encroachers of public spaces by the police, local authorities and a section of the public, and are subject to harassment and forced eviction.

The Act, which aims to “protect the rights of the urban street vendors and to regulate street vending activities”, nonetheless ignores important provisions laid down in the National Policy on Urban Street Vendors, 2009, and many recommendations put forward by the Standing Committee on Urban Development (15th Lok Sabha) in its report of March 2013. Had lawmakers been sensitive to the spirit of the National Policy and the Standing Committee report, the Act could have taken advantage of an excellent opportunity to address the problems of street vendors.

Given the weaknesses of the Street Vendors Act, the degree to which it advances the interests of street vendors depends on the commitment and approach of the government and bureaucracy entrusted with its implementation.

Meaningful omissions
Enforcement of the Act is the responsibility of state governments, and so far more than 10 states, including Punjab, Maharashtra and Rajasthan, have started implementing the Act. The National Association of Street Vendors of India (NASVI) has set a goal of ensuring that the Act is implemented in at least 100 Indian cities by May 2015. The close attention of state authorities in a number of areas is crucial to ensure the gaps between the National Policy and the Act are filled.

First, the National Policy of 2009 specifically mentions the provision of civic facilities such as solid waste disposal, public toilets, electricity, and drinking water in places where vending is allowed. The provision of these facilities is aimed at institutionalising street vending as a sustainable form of livelihood, and enabling street vendors to pursue their businesses more conveniently and with minimal environmental impact. While the Act entrusts the appropriate authorities with collecting the vending fee charged for the civic facilities offered, it contains no explicit guarantee that all such facilities will be provided. The absence of the aforementioned provisions can make street vending less sustainable and more damaging to the environment.

Second, the National Policy gives due importance to institutionalising self-regulation and self-management in hygiene-related matters such as waste disposal. Institutionalisation brings stability and clarity regarding what is to be done, who should do it and how to do it. The Act mandates that “every street vendor shall maintain cleanliness and public hygiene in the vending zones and the adjoining areas.” The Act stipulates that the local authority may make by-laws for the “maintenance of public health, hygiene, and safety standards”, and that the local scheme for street vending should specify the “terms and conditions for street vending including norms to be observed for up keeping public health and hygiene”. There is no aspect of the Act that stresses the importance of institutionalising self-regulation. The only promising measure in this regard seems to be the need for by-laws to be drafted and implemented by local authorities. If institutions that enable self-regulation are not put in place, the objective of promoting norms of civic discipline may not be achieved. While assigning the responsibilities of regulation and management to street vendors motivates them to maintain hygiene, this devolution of responsibility should not incentivise local authorities and the state government to shrug off their duty to provide basic amenities.

Third, the National Policy calls for the promotion of access to services such as credit, skill development and capacity building programmes for street vendors. The Act, in its phrasing and content, appears to be indifferent to these objectives as it maintains that the appropriate government “may” take such promotional measures. The implicit lack of enforceability of this provision may result in the denial of services that could provide increased social mobility to street vendors.

The Standing Committee that looked into the Street Vendors (Protection of Livelihood and Regulation of Street Vending) Bill, 2012, had gone to great lengths to recommend changes, which if accepted, would have made the Act friendlier to vendors. The Committee had recommended that only easily accessible documents like voter ID cards or ration cards be required to apply for a street vending permit. Asking for documents that many street vendors may not have will make the process more cumbersome. The recommendation has not been incorporated explicitly in the Act and has been left to the discretion of the respective state governments.

Additionally, the Committee had recommended that the vending fee should be decided on the basis of the vending occurring – whether it is stationary, mobile or of any other kind – and on the location of vending. A stationary vendor in a bus terminal may, depending on a range of factors, attract more customers and earn more money than a mobile vendor near government offices. It is therefore necessary to calibrate the fees accordingly. The Act leaves the estimation of the vending fee to the state government. Had the guidelines to estimate this been outlined in the Act itself, it would have set a more appropriate framework.

The Committee also observed that the provision of renewal of vending certificates once in three years, as stated in the National Policy, had not been incorporated in the Bill. Instead, the matter was left to local authorities. The Act takes the same stand. This gives local authorities the power to renew the registrations at any time as per their wish, which may prove inconvenient to vendors and lead to their exploitation. The renewal of permits might now be necessitated by authorities for a number of reasons, including a change in the zones and timings in which vendors operate. This may affect the earnings of vendors.

Finally, if any street vendor violates any terms and conditions outlined for regulating street vending, he/she is liable to pay a fine of up to INR 2000 (USD 64). This is too high in a country where the proposed urban poverty line is less than INR 47 (USD 0.76) per day per person and the fine for dangerous driving is just INR 1000 (USD 32). The Standing Committee had suggested a “reasonable” fine for the first instance of offence, but the Act chose to discard this.

Hard questions
The aforementioned facts and analysis point to the most relevant question pertaining to the Act: is the Act regulatory or restrictive? Is it for the street vendors or against them? The generally supportive framework provided by the Act is not to be dismissed, but the pressing question remains: had the issues discussed above been taken care of, would the Act have been friendlier to the vendors?

The National Policy and the Act have the potential to safeguard the livelihood of vendors. But given the weaknesses of the Act, the degree to which it advances the interests of street vendors depends on the commitment and approach of the government and bureaucracy entrusted with its implementation. If adequate civic facilities are provided, self-regulation of hygiene-related matters institutionalised, and credit facilities and capacity building programmes are accessible, the Act can serve to support street vendors. A friendly registration process, reasonable vending fee and fine regime, timely renewal of vending permits, and transparency in the workings of the Town Vending Committee are also needed. If these measures are accommodated by state governments during the Act’s implementation, it will contribute to a better balance between the promotion of street vending as a livelihood option and the regulation of this business.

~ Alen John is a post-graduate student of public policy and governance at the Tata Institute of Social Sciences, Hyderabad.