The only ones that seem convinced of the efficacy of international aid to Afghanistan are the aid agencies themselves. 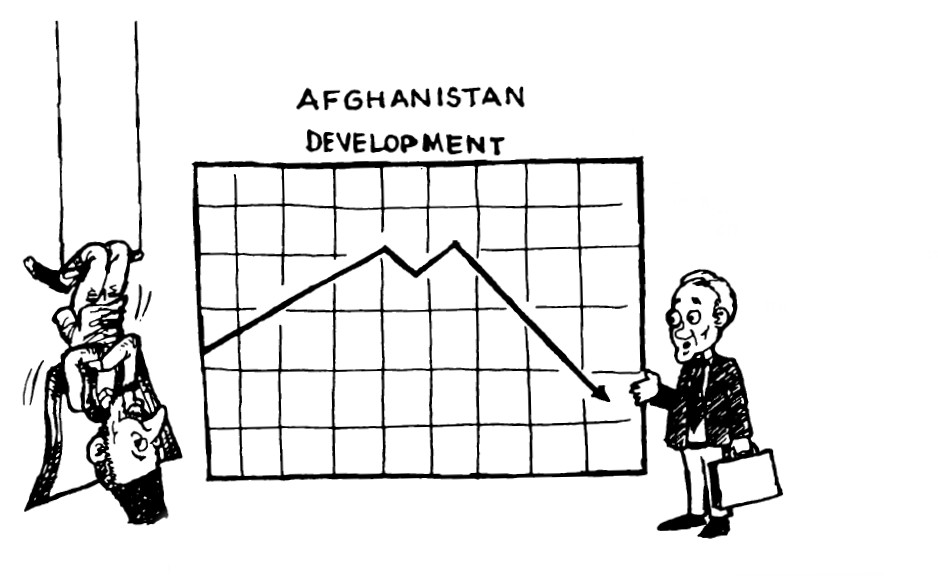 During the last seven years, the US and the international donor community have spent some USD 15 to 31 billion on rebuilding, development and democratisation activities in Afghanistan. Today, the tangible result of this work seems to be the population of some nine million citizens suffering acute food insecurity, and millions of others facing widespread violence, endemic corruption and political anarchy. When asked about the progress made in the past several years, President Hamid Karzai and his Western backers revert to what seems to be a pre-recorded mantra: five million refugees have returned home; over five million children now go to school; an enlightened constitution has been enacted; and elections have taken place, allowing democracy to take root. Meanwhile, few politicians, if any, like to talk about the significant problems that have cropped up in the disbursement of international aid, nor about the widespread corruption and misuse of these funds.

The NGO business has boomed in post-Taliban Afghanistan, greased by the significant inflow of aid money. Hundreds of Afghan and international organisations currently operate in the country, with most of the latter restricting their work to the north and central regions due to the lack of security elsewhere. Yet for all of these eyes ostensibly on the ground, there remain large gaps in basic knowledge. To begin with, neither Kabul nor any one of the Western capitals has a very good idea of how many people actually live in Afghanistan. The lack of a reliable census – due to insecurity and deficiency in funding and other technical support – has not only adversely impacted on development policies (particularly in the planning phases), but also creates confusion in implementation and uncertainty at the national and local levels. Yet the government and the aid agencies nonetheless continue to claim to have improved living conditions for all. Such self-congratulation seems inappropriate because incomplete data makes it impossible to judge the scope and depth of the impact of aid money.

Particularly disturbing of late has been the trend of bringing more international workers to the already inflated donor-agency circuit in Kabul, even as these very organisations have lost access to almost half of the country. For instance, in 2009 the UN Assistance Mission in Afghanistan (UNAMA) is set to hire 2000 additional well-paid international staffers, which is a massive number by any measure. In December of last year, this writer asked Kai Eide, special representative of the UN secretary-general for Afghanistan, about the benefit of employing so many more non-Afghans to work from fortified compounds in Kabul. His response – that it is Afghan staffers, not internationals, that constitute a “tremendous asset” – does not explain his own organisation’s habits.

Inequality between local and international staffers is inherent in the UN system. Apart from the massive security expenditure needed for foreign workers (armoured vehicles, armed escorts), an ‘international’ earns an average of ten times more than does a locally national worker. And the problem is far from limited to the UN system. From 2002 to 2007, more than USD 380 million was spent on technical-assistance activities, meaning the recruitment of advisors to build the capacity of Afghans in various areas. During that period, donors have also paid more than USD 150 million to the United Nations Human Air Service (UNHAS), a private air-service provider that flies international staffers from the UN and other organisations in and out of Afghanistan, most to Islamabad for international connections. Tellingly, none of these funders has offered support to protect Ariana, Afghanistan’s only national airline, from economic collapse.

The parallels with other local aid organisations are not only striking, but dangerous. The Afghan Red Crescent Society and the National Disasters Management Authority – two national institutions responsible for disaster and emergency management – have almost no budget with which either to build capacity or deliver services (USD 2 million and less than USD 1 million annually, respectively). The dozens of foreign humanitarian agencies based in Kabul, meanwhile, have a kitty of more than USD 2 billion for 2009, but very little of this money actually stays in the country. If last year is any indicator, according to the Kabul-based Integrity Watch Afghanistan (IWA), up to 90 percent of these funds will be spent on imported products and services, bypassing equivalent local options. IWA notes that the vast majority of this aid dispersed in the country flows directly back to foreign companies, governments and individuals. Donors, including the UN and the US, have conceded to huge shortcomings in the Afghan aid efforts, with officials admitting to inefficiency, mismanagement, corruption and lack of coordination among the numerous aid actors.

Outside the realm of international aid, too, corruption levels remain extremely high, particularly within the government itself. It is well-known that the Karzai government is mired in malfeasance, even while failing to create meaningful institutional instruments with which to monitor aid delivery. As a result, the poor performance of aid agencies, including the pervasive mismanagement and corruption, elicits next to no response from the national authorities. To date, no international aid organisation has been held accountable by the administration – including the many UN agencies operating in the country, which have piped in over USD 3 billion since 2003. Integrity Watch Afghanistan estimates that, ultimately, some 30 to 50 percent of aid money in Afghanistan has simply been wasted.

There appears to be more than inefficiency at work, however. In the experiences of this writer, the foreign development and humanitarian workers that have descended on Kabul and elsewhere since 2002 bear uncomfortable similarities to greedy entrepreneurs in search of a quick buck. Truth be told, and exceptions excluded, they demonstrate little desire to make fundamental, positive changes for Afghans and the country. A visitor at a UN ‘heads of agencies’ weekly meeting will hear little more than heated debates on rest-and-recuperation packages for international staffers and discussions on importing armoured vehicles. Any talk on actual work will be peppered with institutional jargon of those who see Afghanistan as a career and income opportunity more than anything else. Then again, attend the weekly meeting of the council of ministers, and you will hear President Karzai fighting his vice-presidents and ministers over who is and who is not to be considered a foreign stooge.

Loss of neutrality
In recent times, diplomats have boasted about NATO’s ‘new warfare’ modality, which has turned soldiers into diplomats and development experts in addition to their primary role as fighters. While this may sound good on paper, this practice has in fact proved disastrous in Afghanistan. The space in which humanitarian workers are able to freely operate and assist vulnerable communities has been virtually lost, and international humanitarian laws have been put on hold. The UN and other international aid agencies have faced increasing setbacks in their ability to reach and assist vulnerable communities across the impoverished country, particularly in the volatile southern, eastern and central provinces.

Indeed, there is a strong causality between soldiers performing development works and aid workers losing access. The fact is, US and NATO forces are currently running over two dozen so-called Provincial Reconstruction Teams, which undertake a significant amount of development and humanitarian activities, in addition to their military activities. Most of this engagement is part of the foreign forces’ agenda to ‘win hearts and minds’. Yet this work has been widely criticised by independent aid agencies as disorganised, biased and politically motivated. For the past several decades, in Afghanistan more than anywhere else, the general consensus has held that humanitarian assistance must be neutral and be seen to be neutral. According to international humanitarian practice, the military should only be used in humanitarian operations as a last resort, and when there is no civilian alternative. In Afghanistan, that is hardly the case, and the foreign militaries should have stayed out of development to allow developmental institutions to grow.

Simultaneous with the increase in military involvement in aid delivery, levels of violence in the country have spiked. Throughout all the decades of turmoil and conflict, aid workers in Afghanistan were nearly always able to access needy people. Against such a backdrop, the statistics for 2008 alone are as depressing as they are angering: dozens of aid workers killed and abducted, and hundreds of tonnes of food aid looted by insurgent groups. In a country in which women were traditionally immune from physical violence, three Afghan female staff members from the International Rescue Committee were assassinated in broad daylight in central Logar province in August 2008. Meanwhile, the UN World Food Programme, which feeds millions of hungry people, lost over 1200 tonnes of food aid in attacks on clearly marked convoys.

Civil-military lines have clearly become dangerously blurred. The neutrality of humanitarian work has been lost due to the barbarism of the Taliban, and by the intentional intrusion of NATO and US forces. What should instead be happening is for the armed forces to actively work to create conducive grounds for civilian aid workers to reach out to vulnerable communities. When militaries step into civilian aid work and marginalise the humanitarian and development agencies, the independence and neutrality of the aid action comes under question. Armed opposition groups that fail to distinguish between independent aid workers and military actors – both of whom work in the same terrain – have taken to indiscriminatingly attacking both. This is what is happening in Afghanistan today.

Even the UN Assistance Mission in Afghanistan, which coordinates the activities of all 17 UN agencies, has become a highly biased body. It has acted more as a US/NATO political mission, and served its purpose and bidding to legitimise the Karzai government’s ineptitude. Examples abound to prove the point. UNAMA should have strived against the odds to criticise atrocities committed by US/NATO forces against Afghan civilians. It has often issued statements offering rigid support to the policies adopted by the Karzai government and his allies, in which it has gambled with its neutrality. UNAMA has repeatedly labelled the insurgents as ‘terrorists’, and refused to engage in meaningful negotiation with them to end the conflict. And it has tacitly approved of President Karzai’s unwillingness to put on trial and punish perpetrators of past crimes against humanity.

It is always easy to highlight shortcomings, and it is undeniable that President Karzai has been the global scapegoat for Afghanistan’s failure in the post-2002 period. His failings as a leader are real, and he shares in the blame for much of the country’s ills. However, there is also the reality that the president is only a nominal national leader; it would be more accurate to describe him as the isolated, weak and inexperienced mayor of Kabul. President Karzai is certainly responsible for the current chaos in Afghanistan, but so too are the UN, the US, NATO and other international military and civilian actors, in addition to the insurgents, warlords, criminal actors and other members of the government itself – in Afghanistan, the list of the culpable seems to be only getting longer.

As Washington, DC and the European capitals, along with the Afghan people, ponder a replacement for President Hamid Karzai, they must also rectify their own mistakes and work out a new comprehensive approach. Afghanistan’s requirements for success are relatively simple: a strong and representative leader, unwavering and unconditional US commitment, more development aid and efficient governance, in which the government uses force and reward as needed. For the sake of Afghanistan’s future, the foreign military must get out of development.