With the launch of People’s Archive of Rural India (PARI), rural India has found a much needed platform. 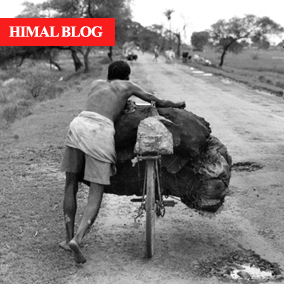 The Census of India 2011 shows that 833 million of the country’s 1.21 billion people live in rural India. It is this vast cross-section of the population and their lives – largely ignored by the media – that forms the subject of People’s Archive of Rural India (PARI). Launched by the veteran rural reporter and Magsayay Award winner P Sainath, the people’s archive encompasses a wide spectrum of rural India: from the grim realities of the farming crisis and resource conflicts, to the colourful aspects of its culture and folklore. It catalogues the complexities of rural India through a combination of photographs, videos, reports and slideshows, with sections such as ‘Talking Albums’ and ‘Faces’. Women’s contribution in rural labour, largely unrecognised across India and Southasia, gets its due in the section ‘Visible Work, Invisible Women’.

PARI represents a model of archiving that can be studied and emulated by other Southasian countries to address the asymmetries in the documentation of their rural societies.

A Southasian predicament
“While South Asian societies have differences, there are considerable commonalities in caste structures and ruralities,” says Sainath. “Problems of hunger, poverty, large scale migration and unemployment which either have their origins in, or are linked to the rural, are visible across Southasia. Many Southasian societies are also undergoing crises of health and water. Neoliberal transformations across the region have strengthened what is worse and taken away much that is worth cherishing. For instance, the feudal khaps in [the Indian state of] Haryana have become only stronger, while traditional occupations such as weaving and folk art have been eroded.”

The predicament of the rural is not confined to India. According to the World Bank, 67 percent of Southasia’s population is rural, making it a region with one of the largest rural populations in the world. It also has the largest concentration of the world’s poor.

With its rural focus, PARI represents a model of archiving that can be studied and emulated by other Southasian countries to address the asymmetries in the documentation of their rural societies. The project has volunteers from a wide range of professions, from journalism and academics, to science, finance, photography, filmmaking and IT. Its ‘Resources’ section is a growing compilation of reports and studies on rural India.  Importantly, PARI gives public credit to and privileges the ownership of individuals over their stories.

Media’s attention deficit
Challenges to agriculture, landlessness, rising energy prices, lack of remunerative employment and infrastructure are only some of the difficulties confronting rural Southasia. Yet despite the fact that some of the region’s most serious crises are linked with the rural, it has received scant media and political attention. The insufficient coverage of rural affairs has always been a problem, but the corporatisation of the Indian media has accelerated this trend. In what he terms as ‘structural shutout’, Sainath points out that there are no dedicated correspondents for labour, employment or agriculture. Some beats – like labour – are subsumed under broader beats such as ‘industrial relations’. But with the increased role of profits and advertising in media, journalism is treated as another stream of revenue. Vineet Jain, the managing director of Bennett, Coleman & Co. Ltd which is India’s dominant media conglomerate and owns the Times of India, said as much in an interview to the New Yorker in 2012: “We are not in the newspaper business, we are in the advertising business.” Therefore, what is thought to not bring in revenues, such as the rural population of India, is not covered.

Regarding access to the archives, Sainath says, “Ten or twelve years ago, most people in India did not have mobile phones in the rural areas. But now everyone in rural areas has a mobile phone. Like the expansion in telecom, we can expect a similar expansion in broadband in rural parts as well.” With ‘everyday lives of everyday people’ as its guiding motto, PARI seeks to involve everyday people in the telling of these stories. Despite their imperfections, positive developments like  the Mahatma Gandhi National Rural Employment Guarantee Act (MGNREGA) show that all is not lost, even as the current government is looking to dilute a scheme that provided employment to 42.5 million rural households in 2012-2013. It is initiatives like PARI that go against the grain of the times and can infuse fresh hope for the rural.

~Urvashi Sarkar is a freelance journalist and currently works in the development sector.

~Disclaimer: The writer is a PARI volunteer.