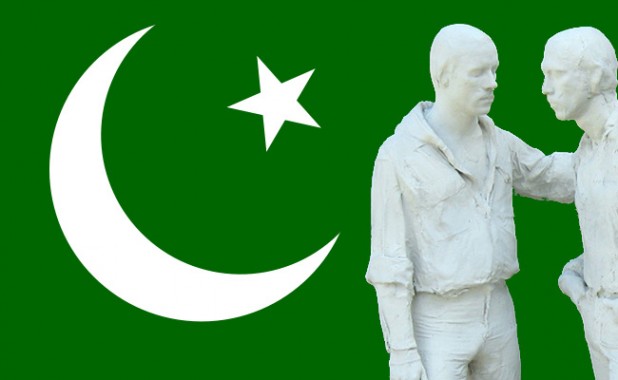 ‘All of us are raised to be homophobic,’ says ‘Karim’ (not his real name), a 28-year-old gay man living in Lahore. ‘In Urdu, I am a humjinsparast.’ He laughs a little. Hum-jins-parast literally means ‘same-sex worshipper’. We agree that tedha (crooked, not straight) is probably an easier term, and more contemporary. As a gay man confessing to being slightly homophobic, he nonetheless seems very comfortable with his identity. He says he was conscious of his queerness from an early age, and thus has had time to acknowledge his identity and process it. Despite his ease, however, social acceptance seems far from imminent.

‘Pakistan is a homophobic place,’ Karim continues. ‘As in any other conservative society, queers can have all the sex and love that they want – as long as they’re quiet about it. One of the problems with this is that people can get away with a lot of things, murder included.’ He pauses. ‘There are no codes, no rules. So if someone fucks you over, you’re totally alone.’ His earlier nonchalance gives way to a more contemplative tone. ‘You’re already a criminal. And that’s tricky business.’ Honour killings, which have gained notoriety for being highly oppressive towards women, also target queers, ostensibly for bringing shame and dishonour upon the family or clan. Murders often go unreported and uninvestigated.

The prohibition against homosexuality in Pakistan is two-fold. First, the Indian Penal Code of 1860, which Pakistan inherited, criminalises homosexuality under Article 377, which states:

Whoever voluntarily has carnal intercourse against the order of nature with any man, woman or animal, shall be punished with imprisonment for life, or with imprisonment of either description for a term which shall not be less than two years nor more than ten years, and shall also be liable to fine. Penetration is sufficient to constitute the carnal intercourse necessary to the offense described in this section.

It is not just that the penal code criminalises homosexuality, however. Certain tenants of Islam as practiced in Pakistan also condemn it. On the ground, this is more effective than the inherited colonial law, as the fear of committing a ‘sin’ tends to carry far more relevance for most than the fear of being charged under Article 377.

Southasian history is steeped in evidence of fluid sexual practice, but in modern-day Pakistan there has been significant re-writing of history. Classical poetry carries references to homoeroticism; monuments and legends bear witness to queer love affairs and homosexual devotion; love is celebrated regardless of orientation. This past, however, is not easily reclaimed. Polyamorous love – having multiple sexual partners at any given time – has also been written out of the region’s many histories, and has largely disappeared from the public imagination.

Each spring, the people of Lahore celebrate Mela Chiraghan, the Festival of Lights. The festival commemorates the work and love of the Punjabi Sufi poet Shah Hussain, who took on the name of Madho Lal, a Brahmin boy with whom he had fallen in love. Thousands attend this festival and participate in the rites of commemoration and celebration. Yet there is no public acknowledgement of the love shared between Shah Hussain and Madho Lal, and of how Shah Hussain eventually became Madho Lal Hussain.

It is not just oral traditions that are endangered. At times, outright government censorship can extend social trends still further. Ismat Chughtai’s short story ‘Lihaf’ (The Quilt), published in 1942, hints at lesbian coupling – and today remains banned in Pakistan.

Secrecy and horizons
‘Aliya’, a 24-year-old urban planner who travels internationally, sits back at a Lahore bakery. There is soft music playing in the background – low enough for us to hear each other but loud enough to shield our conversation from any potentially prying ears. Snatches of conversation in English and Urdu float by. Here, there is little space for Punjabi, Saraiki, Sindhi or Balochi. Pashto makes a rare appearance every now and then. In whatever language, our conversation isn’t entirely appropriate by the standards of Pakistan’s public morality. Aliya says she has not met a lot of queer women or transgendered men (those born women) in Pakistan. ‘We have no local lesbian culture that female bodies can be inspired by or want to emulate – in fashion, style or living habits,’ she says.

Aliya has short hair and is dressed in a khaki-coloured kurta. Tailored in typical masculine style, it is loosely stitched with no embroidery. She shares the story of the purchase from the men’s section of a local retail store. ‘The salespeople weren’t shocked, though they were slightly confused at first. My brother, who was with me, seemed more unsettled.’ Earlier, she had been wearing a pale yellow salwaar-kameez with a low-cut neck and flared waist. She says she likes to switch it up, and admits that the surroundings affect her deeply. ‘It’s almost as if, the minute I re-enter Pakistan, I can only remember how to flirt with male bodies. Somehow, I can’t make that intimate connection or even casually flirt with non-masculine bodies anymore – the prevailing homophobia impairs me.’

Aliya says her horizons are limited by class, ethnicity and gender. ‘I have only been able to interact with queer folks in my [social] class – and our worlds are tiny, and filled with fear,’ she notes. There is also little space outside societal judgment. Aliya says she has come out to some friends and family members, though no one in her immediate family; for the most part, they have been respectful and supportive. Still, there is no queer community to feel part of. A few years ago, she hung out in some underground queer circles, and recalls liking the idea of a safe space that was supportive and could be used for organisation and activism. But the reality was never quite like that. The lesbians and queer women she met there, Aliya says, were a lot older than her and seemed to be at a different stage in their lives. ‘They were surprised by my being so much younger than them,’ she recalls. ‘It seemed as though one had to go through a terrible marriage or horrific engagement to discover [one’s] sexual identity!’ Currently, she is thinking of moving to a new city in order to develop new relations, and relishes the prospect of anonymity in meeting and discovering people. ‘I sometimes fantasise about moving to Karachi, where I hear that there is a younger queer scene,’ she says.

Certain ingrained cultural traits have actually aid closeted lifestyles, Aliya says. ‘If I were to sleep over at a girlfriend’s place, my parents would not be offended or even think twice about it,’ she smiles wryly. ‘But if I want to sleep over at a boyfriend’s house, they wouldn’t even consider the possibility! Perhaps the thought hasn’t even entered their minds that I may actually be sleeping with the girlfriend, and only be sleeping over at the boy’s place.’ She continues: ‘Sometimes it works out perfectly, but only for a little while. The secrecy is fine when you’re 17, but it soon becomes exasperating.’

The secrecy is not unusual, though. All sexuality is a closeted topic in Pakistan. The local media is heavily censored, and affection is rarely shown in public. Yet there is a robust industry that makes and markets pornography. The Pakistan Telecommunications Authority recently banned a large number of websites, including those carrying pornographic content. As intimacy and public and private displays of affection have come under the censor board’s scrutiny, the film industry has also been transformed. Oftentimes, films showing sexual brutality and violence are allowed, while those showing consensual sex are banned.

Small worlds
‘The more I experimented, the more I realised I like being with both sexes,’ says ‘Faiza’, a 25-year-old woman who identifies as bisexual. Faiza has recently moved back to Karachi, the bustling metropolis of roughly 21 million people where she grew up, after studying and working in the US. ‘I have not officially come out to my family,’ she says. ‘Had I been in a stable relationship with a woman, I would have. But till then, I feel Pakistan’s homophobic society would not be accepting of my preferences – and that may or may not include my family.’

Still, queer culture is finding expression, albeit at times in very particular ways. Bagh-e-Jinnah, a park, is a well-known gathering spot for Lahore’s queer community. The gardens in Lahore’s older neighbourhoods are usually frequented by men, seeking refuge from both the sun and society. Here, men sitting with other men, walking close to other men, their bodies nudging each other, often attract less attention than a man and a woman together. But Karim is wary. ‘I don’t go there; it’s sketchy. I meet people online, usually. It’s discreet,’ he says. ‘It’s the standard cliché of gay life in a closed society, where people don’t want to get caught.’ Karim tells me he uses Manjam, a gay dating website that is popular across the region. ‘If there’s a drastic change of regime, [the website] might be infiltrated or blocked. Most people are discreet – only a few have nasty naked pictures up.’ Karim thinks those who post such photographs are part of society for whom ‘the world is a bigger place. My world is really small. Let’s face it, it’s tiny.’

In a country with a population upwards of 170 million, the people of Pakistan continue to live in small worlds oppressed by social practice and propriety. Freedoms are limited, as are opportunities for people to come together and engage with each other regardless of class, gender, religion, ethnicity or sexuality. Even in the urban areas, there are very few places where people can examine intersecting identities or create allies. Historically, Sufi shrines have been sites of freedom and collectivity. But as these are shut down by the state and attacked by militants, even those areas are steadily shrinking, alongside the freedoms they offer.

‘There’s no grand concept of coming out in Pakistan,’ says ‘Fayaz’, a 26-year-old gay man living in Lahore, echoing a sentiment shared by many. ‘If you live in Pakistan, the coming-out process is never over. You’re always coming out.’ He raises both eyebrows, shrugs slightly and continues: ‘There’s always the hope that you might change your mind and decide you want to get married the traditional way – the only way – and give up your gay lifestyle.’

~ Hira Nabi is a filmmaker living in Lahore, and is grateful to those who generously and bravely shared their stories for this article.