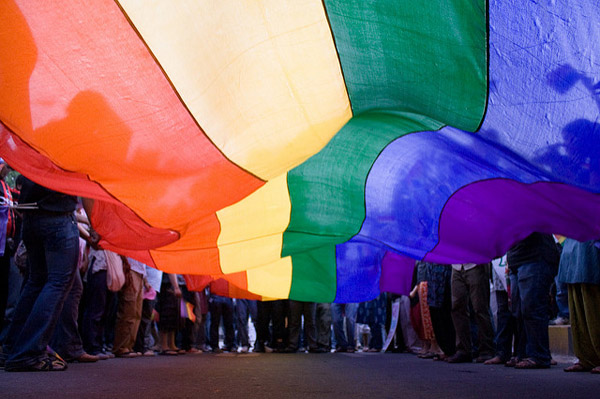 Many of us scattered across the globe know what it feels like when a long, quarter-century battle reaches a resolution. On 6 September 2018, the constitutional bench of India’s Supreme Court partially struck down Section 377 of the Indian Penal Code (IPC), which criminalised “carnal intercourse against the order of nature”, declaring “the decision in Kaushal today stands overruled.” This is what keeps many of us veterans of long struggles going – small victories along the side as we tread the path toward living a life with the motto, “None of us are free till all of us are free.”

Though decriminalisation of certain sexual acts is one necessary but far from sufficient step towards rights for queer people, it is a big victory. It signals the possibility of many more rights that can be demanded, including living without violence and discrimination, and with respect and dignity. Along with guaranteeing these rights to specific sections of society, it is also a huge step towards assurance in the solidity of the Constitution that India adopted in 1949, towards a belief that the Constitution is a dynamic document which has to be interpreted with the changing times, and a clear indication that the court’s duty is to protect the rights of minorities, however minuscule they may be.

These assurances are essential in today’s India where lynching is a norm, attack on certain religions, ideas, and assertions is being normalised, dissent is being quashed and freedoms challenged in the name of national integration and identity. We are facing a liberalised economy where fewer and fewer people have the means to survive, where many are losing access to natural resources and where the welfare state is slowly and steadily turning into a police state that may call upon every dissenting person with a knock on the door. In such times, a constitutional validation from the highest court needs to be celebrated by all citizens.

This battle for rights fought in the courts has not come easy. Over the years, many organisations and individuals, lawyers and non-lawyers, queer and straight people have tried to carry it collectively. In some sense it is this concerted collective effort and participation from a diverse set of people that is also instrumental in making the final outcome so rich, in ways in which it impacts the lives of all people and the democratic process itself.

The chronicle of a movement

I, and many others like me – urban queer feminists (whose queer feminisms also continue to grow as we live and learn) with the privileges of caste and class working in our favour – have been one such set of people who have been participants and witnesses to this process through the many years it has existed. We got into discussions around 377 in the early 1990s when the AIDS Bhedbhav Virodhi Andolan, a Delhi-based group that campaigned against discrimination of people with HIV/AIDS, filed its petition in the Delhi High Court in 1994, challenging the then Inspector General of Prisons’ decision to not allow distribution of condoms in male barracks because that would be sanctioning what was criminal under Section 377 of the IPC. The challenge asked questions of Section 377 and argued that its presence was affecting the rights of many people, especially their access to health care. The petition was eventually dismissed in 2001.

Another context in which 377 came up was in the discussions on child sexual abuse and the amendments to sections 375 and 376 (sections pertaining to rape of women by men) which were simultaneously taking place around this time. Due to the limited interpretation of sexual intercourse as complete penovaginal penetration under the rape law, sexual violence against children was covered under 377. This criminalised the sexual act on the child, but not the violence.  Hence, a new law addressing child sexual abuse was asked for by rights groups, along with a widened definition of sexual assault and a striking down of 377.

While being part of these demands as members of larger women’s collectives and autonomous women’s movements, I remember doing our first signature campaign in 1995 asking for the reading down of 377 as we started collectivising as lesbian and bisexual women seeking our own space. In the next few years other organisations and voices emerged all over the country. So, soon after the employees of Bharosa Trust, Lucknow, were picked up in 2001 under Section 377 for encouraging “unnatural sexual acts” because they were distributing condoms as part of their work, protests erupted in many cities all over the country.

This resulted in the next challenge to Section 377: in 2001, the Naz Foundation petitioned the Delhi High Court. Again, the premise was largely that of the ways in which the section in its current form hampered the work done by HIV/AIDS groups, and the demand was limited to seeking the removal of sexual acts between consenting adults in private from the ambit of the law. This was thrown out in 2004 on the technicality of the lack of locus standi of the Naz Foundation in filing the case in the first place. It was readmitted in the Delhi High Court after a Special Leave Petition filed in the Supreme Court directed the the Delhi High Court to hear it.

Between 2001 and 2004, much had changed in queer organising in the country. More conversations, more people and more organisations in support meant that the fresh challenge also allowed for other voices to come in as Voices Against 377, a Delhi-based conglomeration of queer people, women’s rights groups and child rights groups, backed by many others across the country. The scope of the case was expanded with affidavits of people’s experiences. The case soon started to be owned by many more than just the Lawyers Collective who had filed it and their client, the Naz Foundation.

Following the Naz judgement, however, we got busy leading more open lives and making our presence felt. We started living as full citizens, exploring our queerness and our difference. We did not pay attention to the challenge to the judgement in the Supreme Court, believing in the merit of our argument. And we got our first brush with reality as the drama unfolded in the highest court of the country. Discussions were not on law, they were not on facts and lives, they were not on what was being submitted and argued, they were on some notion of reality that was being created by the judges with their own limited understanding of the world.

What we got at the end of it was the horror of the Koushal judgement on 11 December 2013: the Supreme Court overruled the 2009 Delhi High Court verdict, reinstating Section 377. What was always ours and had been given to us with glory in 2009 had been ripped away. But people had changed, times had changed, and the genie was out of the closet. “No going back,” we said and did not go back. Another decision from the Supreme Court in NALSA vs Union of India gave constitutional recognition to trans people and held hope for better lives for the most marginalised among the queer community. We continued with the legal battles against Section 377. The curative petition was admitted and kept pending for many years. We held on with a belief that justice would be done. While the matter was subjudice there truly was, “no going back!”

And then in August 2017 came the judgement in Puttaswamy vs Union of India in which the nine-judge bench of the Supreme Court ruled that privacy is a constitutional right, giving us another chance to reclaim what was snatched away from us in 2013. Fresh challenges were filed and new arguments were made. The many years in between allowed for a more nuanced language. The richness of all the petitions, if read together, show how the legal argument and those making it have come a long way. We had moved beyond couching the demands within the limited realm of health care and medical rights, and were laying claim to broader civil rights. The queer is inhabited by many more realities and with a clearer understanding that 377 affects different people differently.

A quarter century is a long time, and like any legal battle, the fight against Section 377 has its ups and downs, twists and turns. It has been an important part of the queer rights movement but it is just one small part of the spectrum of what queer rights are. It has been a way of bringing many of us together and it has also been a way of starting many discussions – in the media, in homes, in schools and colleges, on the streets, in marches, in film festivals, in cultural programmes, and in every place that one can think of. Everyone today knows of the battle of 377 because there were many efforts made to have these conversations.

As the judicial battles continued, the world around and within us has also changed. Different identities are now recognised and as are different realities. We are still unravelling the multiple meanings of queerness, even as we continue to fight our queer battles. For some, being queer is just a lifestyle choice, an assertion of freedom and equality, while for others it is about questioning every idea of what ‘normative’ means. At the same time, for some, the capitalist project was what made their liberal lifestyle possible, while for others this was what broke the back of many queer people trying to survive on the streets without any social capital to back them. For some, the struggles against other marginalisations were not really ‘queer’, for others, there was no queer struggle without including broader struggles for rights, justice and equality.

And as we figure out the full potential of all that has been said in the voluminous judgement of the Supreme Court on 6 September, the heart rejoices once again. What was ours forever is ours again. This was not just a legal fight for the queer people of today and of the future, but also our reparation to the many that went unsung, who lived in shame and fear.

People keep asking us, “What next?” And we shake our heads not comprehending the question. This legal battle was just one of the many battles that are underway. So yes, we did stop as one does at a semicolon; we rejoiced and jumped with joy and held each other in love and camaraderie. We wouldn’t mind getting these pleasures more often. The essence of queerness, after all, lies in acknowledging pleasure.

Kyle G Knight on an online initiative for safe housing for gay people in India. (February 2015)

Danny Coyle on the trials and tribulations of young queer people in Nepal. (February 2017)

An extract from Siddharth Dube’s memoir No One Else: A Personal History of Outlawed Love and Sex (December 2015)

Ajita Banerjie on the problems with India’s Transgender Bill. (June 2018)

Annie McCarthy on the rise of queer Southasian literature. (January 2014)

Chayanika Shah is a member of LABIA – a Queer Feminist LBT Collective based in Mumbai. As part of the collective she has been part of the queer-rights movements in India.