Skip to content
Commentary > The audacity of ‘sitting improperly’

The audacity of ‘sitting improperly’ 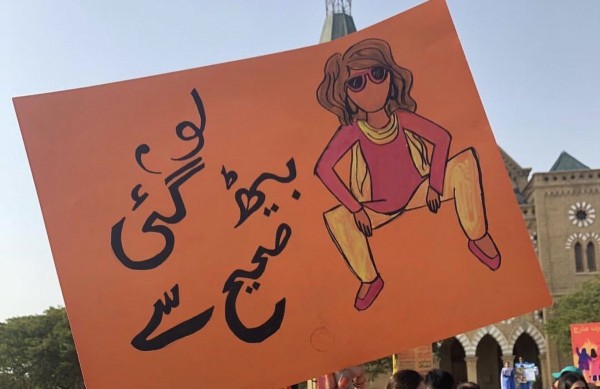 A placard at Aurat March 2019. The Urdu text reads, “Here you go: I am sitting correctly now”. Photo: Facebook

In November 2017, a few hours before my 25th birthday, a colleague sent me a tweet with a picture of me wearing jeans, sitting behind a man riding a bike in Karachi, my head covered with a floral stole. Soon, my Facebook timeline was filled with birthday wishes alongside the same photo, with my women friends lauding me as ‘bad-ass’.

What was ‘bad-ass’ about the picture was the way I chose to sit: astride – with one leg on either side of the bike – like my male counterparts in the city. This, of course, is very unlike women who ‘side-saddle’ to conform to patriarchal pressures of how women must sit, even at the cost of their own safety; I have seen far too many accidents where women who side-saddle have fallen down face first.

My friend Asra, who has never side-saddled before, attempted to do so on her mother’s instruction and almost fell on the road. The bike driver had to intervene and eventually asked her to sit astride like a man and always ensure that she do so. Her mother, however was not comfortable with the idea of relatives finding out that her daughter was sharing rides with male strangers, and asked her to cover her face to hide her identity.

I used to ride a bike behind my paternal uncle till I was nine or ten years old, so side-saddling was an alien concept to me. The next time I would ride a bike would be more than a decade later, in 2015.  Since March 2017, I have been using a newly introduced bike-hailing app called Bykea to commute to work. For a reporter, public buses are not the most convenient mode of transportation, since the urgency of the job requires us to reach places on short notice. Also, thanks to broken roads and un-ending constructions of a mass-transit system in the city, the traffic congestion ensures that around PKR 500 (USD 3.5) vanishes into thin air if one takes a car using ride-hailing apps like Careem or Uber. The city is in dire need of a mass-transit system, which existed up to some decades ago, but till it reawakens from its deep slumber, people need other modes of transportation.

Initially, I did not use bike rides after dusk, due to my inhibitions about male strangers and darkness, but I realised that the sooner I understood the limitations of my socio-economic class, the better. I started using bikes to return home from my workplace, as well but treated 9.30 pm as my ‘Cinderella hour’, to keep my inhibitions at bay. The first time I shared a ride with a man who was a stranger was in 2017, when I still wore hijab. I located the driver on the map, approached him and told him my destination. After I got on the bike, he told me that he had only one helmet. Later, he said: “People keep staring because of the way you are sitting… I find it embarrassing.”

I was seething with anger and humiliation, but couldn’t get off and book another ride as I would be charged a cancellation fee for my current ride. The next 35 minutes felt very long. When I finally got home, I resolved to call out any such driver in the future, forgetting that my need for affordable transport would trump my desire to challenge misogyny.

Since that incident, I started getting used to the drill of booking a bike. The first question I usually got from a driver was: “Will you go or do you have a parcel [to deliver]?” When I told them it was the former, I would watch their faces fall. Once, the app matched me to a driver opposite my apartment building who flatly refused to drive me because he had driven me once before.

In another instance, I got a ride with a driver who was fascinated to see a woman passenger. I could sense his excitement and nodded to all his queries till he asked me to cover my head. As someone who had willingly covered her head for a decade before stopping for personal reasons, I was fuming and asked him to drop me off at the nearest convenient point from where I could hail another ride. Instead he made me get off right then and there.

I was shaken by what had just happened and by the entitlement of a man – whose job was to pick and drop me in exchange for a sum – to reduce my worth to my attire and posture. Now, I find myself hurriedly covering my head whenever I have to book a ride. I can’t risk putting my work at stake by calling out every instance of misogyny and dealing with one cancellation after another.

Once, about 15 minutes after being dropped at my workplace, I started receiving text messages from the driver. This went on for a good 12 hours, culminating with him calling me at 2 am. He then sent me photos through WhatsApp. I still ignored them for another day. When the harassment did not stop, I filed a complaint against him only to get voice messages after a few hours about how ‘his wife was doing this’. My experience just strengthened my belief about how men will always throw women under the bus to save their own lives. Needless to say, I received ‘dick pics’ from different numbers following the episode.

My fear after these experiences was strong enough to stop me from commuting using the app for a week. Surprisingly, many men I knew asked me to ‘simply’ block the harasser – because the best solution to end a problem is to sweep it under the carpet. Having thus ‘saved’ the women, who cares if other women suffer because no one reported the harasser?

I wondered if riding a bike astride like a man, in close proximity to a male stranger, makes women more vulnerable as it could be interpreted by some men as a sign of sexual availability – like how women who smoke cigarettes are perceived in Pakistan. However, a friend of mine who uses the same app says that she gets harassed even inside a car. There have been times when these apps have tried to show that their service is safe for women. It is nice to see pictures of women on their social-media pages, but these do not reflect the experiences of many women who cannot afford to hire a car. They have to use bike rides and brave the heightened public scrutiny that these come with.

Most bike drivers would not think twice before asking me if the man accompanying me to the bike is my brother, and I would say “yes” to avoid any further conversation even if that person was just a colleague or a friend. Now I plan to tell them that the man is my husband so that they go silent for the rest of the journey. After all, men only go silent when another man signals them to do so.

Sometimes, the mere presence of women in public spaces is an act of resistance. Even when their intention is to commute from point A to point B in the most affordable way possible, moral policing and sexual harassment transforms their everyday lives into battlegrounds.

It’s not that I don’t empathise with the male drivers’ discomfort at ‘being seen’ by family or friends with a woman sitting like man. I do my best to put them at ease by placing my backpack between us and make sure that there is no physical contact – even during the worst of speed bumps.

Despite the constant stress from moral policing and sexual harassment, there are plenty of drivers who know how to do their job professionally and without objection. Some just want to chat, despite Karachi’s evening breeze making it impossible to hear what they are saying unless they scream. Some drivers, after figuring out that I am a journalist, ask curious questions about the future of Pakistan, what the prime minister is up to, and if I can type without looking at the keyboard.

I still find it amusing how the mere act of sitting astride a bike is gendered enough to be considered breaking a ‘stereotype’. During the Aurat March 2019, there was a huge outcry over a simple poster depicting a girl sitting with her knees apart, which read: “Here you go, I am sitting correctly now”.

I navigate my existence in the city by balancing my beliefs and anxieties, all the while winking at the little girls who tug at their mothers, grandmothers, aunts, who point at me and trade secret whispers of the hope of defying the smallest of gendered norms.

Zoya Anwer is a Karachi-based journalist. A United Nations Reham Al-Farra Memorial Journalism Fellow, Anwer has covered a range of topics related to gender equality, ethnic and class dynamics, as well as social relationships between individuals and cities.