Skip to content
Interview > The crisis in Pakistani journalism

The crisis in Pakistani journalism

In conversation with journalist and human-rights campaigner Omar Waraich. 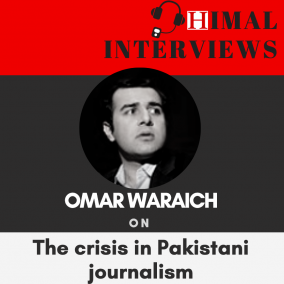 Pakistan’s media has of late made news for all the wrong reasons: from state censorship to journalists being laid off in large numbers. Despite a growth in the number of media establishments in the last several years, the state has found new ways to silence independent journalism and manage public perception.

In this episode of Himal Interviews, we talk to Omar Waraich, who reported from Pakistan for TIME magazine and the Independent daily for nearly a decade, and is currently Amnesty International’s Deputy Regional Director for South Asia. In this conversation with our editor Aunohita Mojumdar, Waraich talks about the transformation of Pakistani journalism, the military’s encroachment in traditional and social media, and the wrong lessons the Pakistani establishment learnt from Indian journalism.

~More podcasts and interviews by us.