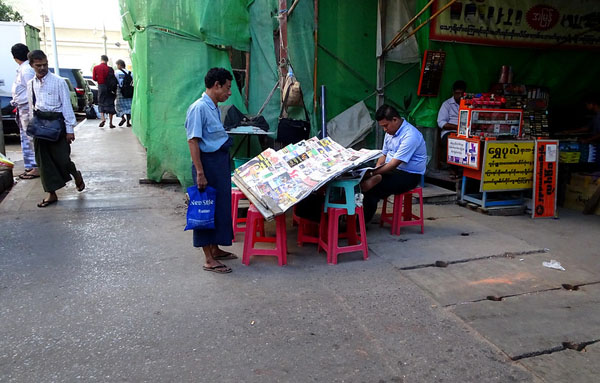 The economy was a strange beast. On the surface, Burma in the early 2010s looked to some like a new frontier market, emerging from long years of hibernation, and set to receive global capitalism with open arms. Scratch the surface and even the casual observer might realize that – unlike, say, Vietnam twenty years before – Burma was already enmeshed in its own strain of capitalism, more than a generation in the making, with markets stronger than state agencies, and a legion of shadowy businessmen keen to protect their turf. Dig deeper, and outsiders might see that just a few hours’ drive from Rangoon or Mandalay were territories beyond any state control, inhabited by a patchwork of armies and armed groups, illegal and illicit trades, and a Chinese frontier over which even Beijing’s sway was tenuous at best.

To the extent that there was a vision, it was to move from the anarchic capitalism of the past two decades to a more garden-variety state capitalism.

The Thein Sein government had moved fast and decisively to improve the economy. The results were plain to see. Inequalities, however, remained as deep as ever. And there was no real conversation about the future shape of the economy. To the extent that there was a vision, it was to move from the anarchic capitalism of the past two decades to a more garden-variety state capitalism, following other Asian examples and focusing on export-oriented industrialization.

And any genuine effort to restructure the economy faced monumental obstacles. Office-holders and cronies had fine-tuned venal relationships. Many stood ready to frustrate further change. State-owned firms, most suffering heavy losses, employed tens of thousands of poorly skilled and virtually idle workers. The army, through its own conglomerates and massive landholdings, still enjoyed a fat piece of the pie. Budgets were bloated and billions of dollars in public funds disappeared into the bureaucratic labyrinth. Few paid taxes, including on property. In 2012, two new land laws were passed, with the stated aim of rationalizing an extremely messy land tenure system; but depending on how the laws are implemented, they may well entrench a status quo that concentrates millions of acres in the hands of those with access to state power, leaving millions of people with nothing.

At the same time, the shadow of the country’s illicit industries loomed ever larger. By 2015, the northern and eastern Shan Hills had become the global epicenter for the production of meth tablets, as well as the higher value crystal meth, or ice. Militia allied to the Burmese army were deeply involved. So, too, was the biggest rebel force, the United Wa State Army. Ice was exported to fast- expanding markets in Australia, New Zealand, and Japan, where an increasing number of housewives are among the new addicts. As with jade, no one knows the total value of the trade, though United Nations estimates run into the tens of billions of dollars a year.

All along the Chinese border were casinos in the hands of various insurgent armies and militia. They catered exclusively to Chinese customers, many of whom had been lured from cities across China with free transport and a week’s luxury accommodation. In all these places the staff spoke Chinese, Chinese currency was used, and Chinese phones could even be used with no roaming charges. Some customers lost the equivalent of hundreds of thousands of dollars in a few days. Anyone who couldn’t pay up would be held and even tortured until their relatives wired the money demanded. “To travel there is to be doomed,” said one gambler.

By 2015, the northern and eastern Shan Hills had become the global epicenter for the production of meth tablets, as well as the higher value crystal meth.

Casinos were one way to make money. Robbing casinos was another. In March 2017, armed men belonging to the Myanmar National Democratic Alliance Army forced their way into the Fulilight Casino in Laukkai and rounded up three hundred staff members. In the pitched gun battle that followed between the thieves and both government troops and government-allied militia, over a hundred people were killed or wounded, including forty civilians. Using twenty trucks they had lined up outside the casino, the attackers made off with no less than $73 million in cash, burning the money they couldn’t take.

And wildlife trafficking to China was now reaching epic proportions. Tigers, bears, elephants, and pangolins from Burma were being smuggled whole or in parts for bogus medicinal use or to be served as dishes in exotic restaurants. The National Democratic Alliance Army, another (similarly named) rebel group based at Mongla, near Laos, was becoming a world hub for illegal wildlife trading, acting as a transshipment point for ivory and rhino horns in particular from Africa to China.

Over the past two decades, the biggest of Burma’s rebel armies, the United Wa State Army, had made weighty investments in China, Hong Kong, Macau, and Thailand. They also owned major businesses in Burma itself, including Yangon Airways. But after a crackdown on money laundering in 2015, the Wa Army found a new partner in the King’s Roman Casino on the Laos side of the Laos–Burma border. A colossal structure with water fountains, mock Italian Renaissance frescos, a health spa and, of course, hundreds of gambling tables, the casino is part of a Special Economic Zone run by China-born businessman Zhao Wei. In 2018, the US government placed Zhao Wei under sanctions for alleged ties to “drug trafficking, money laundering, child prostitution, bribery, and human and wildlife trafficking,” all facilitated through the casino.

There were also strange new Chinese connections. The Yucheng Group was a Chinese financial company owned by a thirty-something-year- old entrepreneur named Ding Ning. Its most famous product was something called EZuBao, a Ponzi scheme which swindled more than $7.5 billion from nearly a million private investors. Before its collapse, the Yucheng Group was also deeply involved in Burma. It supported the Kokang militia as well as several other insurgent armies along the Chinese border. In 2015, it announced plans to set up a Yucheng Southeast Asia Free Trade Zone in the territory controlled by the United Wa State Army, promising 40 billion yuan (around $4 billion) in investment. Ding Ning and his Yucheng Group were likely planning to use Burma’s already well-established money-laundering operations to launder their own Ponzi scheme gains. Ding Ning is today in jail, but no one knows what happened to the $7.5 billion. Most suspect that wherever the money is, it got there via Burma.

These sums, from narcotics, casinos, wildlife trafficking, and crossborder organized crime, are staggering. There’s no good estimate of how much money has actually been made or where it’s been kept. But even if only a fraction of the tens of billions of dollars involved wound up in Burma, the money would be shaping incentives across the political landscape. And it probably is.

~ Excerpted from The Hidden History of Burma: Race, Capitalism, and the Crisis of Democracy in the 21st Century, by Thant Myint-U. Juggernaut Books, 2019.

Thant Myint-U is a writer, historian, conservationist and former diplomat. He currently heads the Rangoon Heritage Trust, and is chairman of U Thant House, Rangoon’s leading discussion center. He is the author of four books, including 'The River of Lost Footsteps: Histories of Burma'.