Skip to content
Interview > The future of democracy in the Maldives

The future of democracy in the Maldives

Is the new government in Male fulfilling its pledges for judicial reform and democracy? 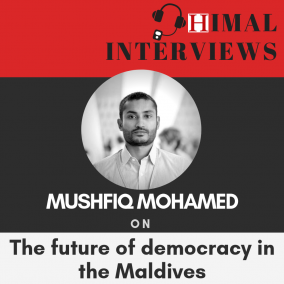 The defeat of Abdulla Yameen to the Maldivian Democratic Party candidate Ibrahim Mohamed Solih in the 2018 presidential elections was seen as a watershed moment for the political future of the Maldives. Following the MDP’s resounding victory in the April 2019 parliamentary elections, hopes for democratic reforms and justice for past atrocities rose still higher. But is the new government in Male living up to its democratic pledges?

In this episode of Himal Interviews, our Editor Aunohita Mojumdar is in conversation with Mushfiq Mohamed, a senior legal officer at the Maldivian Democracy Network. Mohamed talks about the new government’s efforts at reform, the perils of political expediency, and the need for systemic political transformation amid post-election euphoria.

This is an unedited transcription from the podcast. Please listen to the corresponding audio before quoting from it.

Aunohita Mojumdar: Welcome to the Himal Southasian podcast Mushfiq. It’s really good to have you back with us again. We’ve been following the developments in the Maldives obviously, as you know, and we have commented on the great courage of the Maldivians in throwing out the autocratic government of Abdulla Yameen. But we wanted to hear from you about how things have been in the Maldives since then.

Mushfiq Mohamad: Thank you so much Aunohita for having me again. It’s really good to be back here speaking to you on the Maldives. First of all, I’d like to say that you’re right; it has been a political rollercoaster of a past two years for the Maldives and the Maldivian people resisting an authoritarian reversal. And I think things have changed since then, from going from euphoria to actually getting the work done and implementing these much-needed reforms, which the government pledged when they went into elections.

AM: Following the presidential elections, of course, there were the parliamentary elections in which the Maldivian Democratic Party (MDP) won an overwhelming majority. But the process of democratisation is of course far more complex than just replacing one party with another, or replacing one government with another. So, I’m wondering if you could talk about some of those processes.

MM: The move toward democratic change began really in the early 1990s and what that resistance produced was a change in the electoral system. So, in 2008, with the new Constitution, we had multi-party elections for the first time. But a lot of the changes envisioned by the Maldivian people have yet to be realised. And many efforts have been made by democratically inclined governments to implement these changes. But a lot of these efforts fall short because an interest is given to political expediency. And in a small island nation like the Maldives, it becomes more important to sustain that coalition rather than providing the community needs or addressing the community’s aspirations.

AM: So, what are some of these aspirations that have not been met?

MM: I think the basic sort of infrastructure is lacking in the Maldives. We’ve had a long history of neglecting everything outside of Male, or the atolls and islands closer to Male. So that disparity is what we see today and why there’s so much inequality and disparity in the Maldives.

On top of that it is common knowledge that the Maldivian judiciary has not been able to provide the type of justice that we are seeking. The democratic movement that I spoke about just now, which started in the 1990s, was really based around people against torture – and this torture was enacted against both political and non-political detainees. So that has still not been a reality for Maldives. We still hear about custodial deaths; we still hear about torture in custody or during arrest and that culture is what we really need to change – that culture of violence, which often gets put on the backburner when a new, more democratically inclined government comes into place. So, we can change people in these institutions but the institutions don’t change. And without addressing these past grievances or acts of violence or corruption we can’t really move forward as a nation. I think what we are seeing is that each time we give weight to political expediency we give away that opportunity to have long lasting stability.

AM: The transitional justice process has started, so can you tell us a little bit where it stands right now?

MM: The current government came into power on the premise of providing justice for unsolved murders and forcible disappearances, and also to recover the assets that were lost with the biggest corruption scandal to hit the Maldives and the money laundering that went along with it. So, these mechanisms are worthy of applaud, but at the same time we must think whether this is a holistic program, when you have a limitation on the timeframe, especially one that is so rigid and doesn’t really reflect what the people want.

AM: What is the limitation right now?

Right now, as we know from the government responses at the United Nations (UN), we know that the current period is from February 2012 to September 2018, which only covers really the Yameen period. But if we do that, I think we’re compromising on a comprehensive effort to address past injustices.

AM: And that’s really ironic because I think in the Maldives the people above all really risked a lot and paid the cost of voting this party into power.

MM: I think what you’ve said there is a very important fact that gets forgotten really easy with this, like I said, euphoria of coming into power, the sacrifices that people have made. Some killed and, you know, tortured, arrested, losing their livelihoods, their families and the scrutiny that existed just vanishes within a few weeks. So, I think it’s important again to keep that scrutiny whilst acknowledging and valuing the positive changes.

AM: So, the current government has set up a number of commissions. Can you explain a little bit about them to us?

MM: One of the first things that this government did was to set up this commission on disappearances and deaths but this is between 2012 and 2018. In the beginning, it didn’t have any powers to undertake criminal investigations but recently it has been given that power by the Parliament and we are expecting to hear about the findings for Rilwan’s case within the coming months. But there have been many delays again with disclosing the findings of the commission and we, of course, understand the difficult environment in which they are working in where there has been an incomplete investigation that wilfully hides the perpetrators or evidence incriminating these people. And at the same time, we’re looking at an unreformed judiciary. So, how will these findings manifest itself as a conviction, because that is what would bring justice for these families to get compensation and for the perpetrators to be convicted after a fair trial.

AM: And there is also the prison audit commission, the asset recovery commission, an ombudsmen office, a public defenders commission – all of these have been set up by decree have they not?

MM: Initially there was a decree, but the only three commissions that were set up that way were the commission on disappearances and deaths and the prison audit commission and the asset recovery commission. The other two, the ombudsman office and the public defender’s office haven’t been set up yet. These presidential decrees were followed by laws empowering these commissions, so the prison audit commission has actually finished its work and our executive director was a member of that commission and the report includes recommendations to the government, to the home minister, on reforming the prison and police so even with that we’re finding that a lot of recommendations which come with deadlines haven’t been fulfilled in time. This is again why we need to keep an eye on whether we are meeting these deadlines and requirements we have set.

AM: You’ve pointed very rightly to the role of civil society in monitoring some of these processes. And I think it’s very difficult in the current situation because there is a feeling especially in the international community that the good guys have been voted into power and perhaps there is less need for organisations such as yours to continue working on these issues. Can you tell us how you see the role of the Maldivian Democracy Network (MDN) in the current circumstances?

MM: I think because these democratic changes came so rapidly to the Maldives, in a way and almost overnight, within a few years we had multiparty democracy so still I find that people are finding it difficult to understand the different roles that we play. What is the role of civil society, what is the role of the prosecutor general’s office, what are their responsibilities? So, when civil society criticises a government that seems to be more democratic, it does not mean that it is devaluing the struggle of the Maldivian people to bring this government. It means that we fill in the gaps between government ambitions and community needs. So, if those government’s aspirations don’t meet the people’s aspirations, then it’s going to be a very superficial result.

AM: I think for politicians, the election and the subsequent change in government is an end in itself, whereas I think for civil-society groups and democratic people, it’s more of an opportunity and starting point for change.

MM: I think because of the way that electoral democracy work it gets really cyclical and short-sighted so people are focused on five years whereas civil society and human-rights defenders and journalists are thinking on a wider scale of time. So, I think that is what we are bringing to the table; we don’t have selective amnesia, we want to look at the full picture. And I don’t think the government also wants to forget these important aspects of attaining justice and democratic consolidation. And we are very happy to have a government that is open to our suggestions for the first time in, you know, the past six years. And, it is a hopeful time, but we need to remain critical of what’s happening in order to have a genuine democracy in the future.

AM: Well, we’ve all been looking to Maldives which has, I think, been one positive aspect within Southasia, where the rest of the region has largely gone towards more authoritarian regimes than less democratic polities, so we look forward to hearing more about how the process unfolds and more power to the MDN for keeping its eye on the really critical issues. So, thank you very much for talking with us here today, Mushfiq.

MM: Thank you so much Aunohita and Himal for speaking to us again. And like you mentioned, the fragile nature of democracy in Southasia, I think that is really one of the reasons why we should maintain this focus on the Maldives and rest of Southasia.

More podcasts and interviews by us.