The Languages of Lollywood

How linguistic politics impoverishes the diversity of Pakistani cinema. 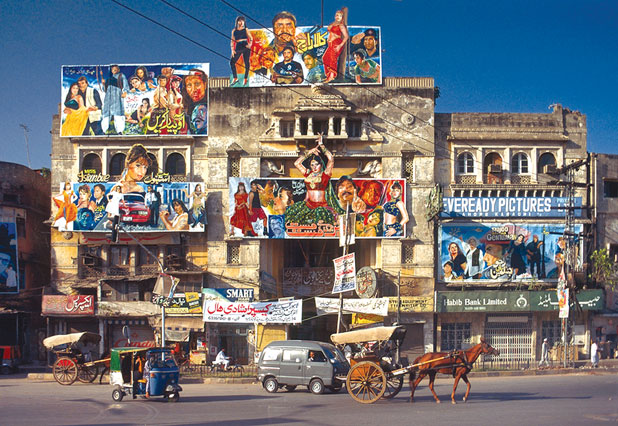 Rhyming and alliteration might be childish indulgences, but they are not without their appeal. So, if there is Hollywood, then why not Bollywood (with reference to Bombay), and if Bollywood, then why not Lollywood (with reference to Lahore)? Here, this term is stretched to encompass all films made anywhere in Pakistan and even, though only in passing, to those made in Dhaka before 1971, in an attempt to examine the intriguing world of language in Pakistani cinema. Strangely enough, the only scholarly book on Pakistani cinema, Mushtaq Gazdar’s Pakistan Cinema 1947-1997, does not pay specific attention to the language of films. The only scholar who does mention language is Alyssa Ayres in Speaking Like a State, in which she references Maula Jatt which, she points out, changed a film industry that “had long indulged the genteel poetic Urdu aesthetic”.

The elitism of Urdu

The Pakistani state does not impose any constraints in written documents on the language or languages that may be used in cinema. However, the 1979 Motion Pictures Ordinance does note that nothing in a film, including language, should be prejudicial to “decency or morality”. People also assert that there is an unwritten understanding that Hindi words should not be used. Both examples mentioned above are part of what I call a language ideology, or a set of beliefs about language articulated by users as a rationalisation or justification of perceived language structure and use.

In Pakistan, there is a cardinal belief in a linguistic hierarchy in which English comes first, Urdu comes second, and regional languages come third. Then there is the hierarchy of varieties, of which diction and pronunciation are the main markers. In Urdu, the preferred diction was Perso-Arabic. The accent which went with it was a cultivated one based upon the standard varieties of Lucknow and Delhi. Despite protestations about the value and primacy of these linguistic traits, the directors of Urdu films settled for a pragmatic model of what some of them described as an ‘educated, urban, standard Urdu’ in an accent in which the letter qaf was supposed to be pronounced as /q/ (unvoiced uvular stop) and not as /k/ (unvoiced velar stop) and the letter sheen was /sh/ not /s/. However, even this preference was not uniformly practiced. Local accents were often accommodated, and in the case of a famous actress like Shabnam, a slight Bengali touch was seen as appealing. Where the champions of ‘high’ Urdu actually made their mark was in a deliberate avoidance of Hindi words which went so far as to eschew words of Bhojpuri and Braj. This fit in with the construction of an exclusivist Pakistani identity in which cultural and linguistic continuities with ‘Hindu’ India (which also meant aspects of pre-Partition UP culture) were denied. The process was accelerated by state-controlled radio and television, but in films it was carried on by directors and writers who were impelled by rivalry with Indian cinema. A documentary called Hamari Zaban (Our Language) was made by Shaikh Hasan to emphasize the iconic value of Urdu as the language of national unity, but it was not successful. Indeed, propagandist films never achieved much success, irrespective of the language in which they were made.

The language ideology mentioned above – the exaltation of the standard Urdu accent, based ideally on the linguistic norms of Delhi and Lucknow, as well as the hierarchisation of the languages used – is still part of the film industry in Pakistan. However, in practice, these norms are only loosely followed.

Language switching is allowed when it depicts a certain kind of character: an Indian if Hindi words are used; a show-off or a person who has lived abroad if English ones are used, and a villager or a working-class person for indigenous languages.

One interesting element of this language ideology is that switching languages during conversation is usually considered objectionable. The use of Hindi words in Urdu is considered especially inappropriate, as it is seen as anti-Pakistan and even anti-Islam. Many words now considered ‘Hindi’ – such as chinta (worry), sagar (sea), shanti (peace) – were part of a common lexicon known as ‘Hindustani’, until a deliberate movement known as the ‘Islamisation of Urdu’ purged them from formal writing. English words are also frowned upon because they are considered a sign of linguistic snobbery, while mixing Punjabi or Pashto words, or using accents based upon the rules of pronunciation in these languages, denotes a lack of education and urban sophistication. Such language switching is allowed when it depicts a certain kind of character: an Indian if Hindi words are used; a show-off or a person who has lived abroad if English ones are used, and a villager or a working-class person for indigenous languages.

Such manifestations of language ideology in practice meant that for the first twenty years after Partition, Urdu dominated the film industry in Pakistan. In the years following 1947, many people connected with the film industry in India migrated to Pakistan and settled down in Lahore or Karachi. They belonged to the culture of UP that placed great value on the ashraf accent of Lucknow and Delhi, but the Urdu now used in Pakistani films is not the same ‘pure’ language that was used in the early years of Pakistan.

The challenge of other languages

In more recent years, Punjabi has become an increasingly important language in the film industry. Indeed, production of Punjabi films surpassed that of Urdu from 1970. Despite the fact that Punjabi is not the medium of instruction at any level in any educational institution in Pakistan, it is the language of entertainment. The common belief that Punjabi has more ‘dirty’ words than other languages is wrong – all languages have such words. However, it does tell us something about the public perception of the language. Punjabi is the language of jokes, used very often in a male domain at the expense of women, full of witty repartee and intimacy, and contrasts with the official discourse of sobriety and high-minded educated pleasures available in Urdu. Hence, its rise in cinema (primarily a medium of entertainment) is not surprising. Indeed, the predominance of Punjabi over Urdu as the language of entertainment is, in a sense, a measure of the cultural confidence of the film industry in a social ideology that gives prominence to Urdu.

What is even more interesting is that if we look at the entire history of Pakistan’s film industry, approximately one-third of the films have been made in Punjabi. This is an impressive number especially if we keep in mind that even Bengali, the language of 54 percent of Pakistani people before the creation of Bangladesh in 1971, was used in only 13 percent of films. Sindhi, a language spoken by 11.77 percent of the people and, like Bengali, an identity symbol of an ethnic movement, was used in 1.74 percent of films. This can be explained in different ways. The former East Pakistan was a big market for Urdu films, and this market vanished after 1971. Another explanation is simply that Punjabi films have been cheaper to make and appealed to a populist audience. The variety of Punjabi used in these films is said to be the ‘soft’ language of Lahore. This urban variety, which includes Urdu words, may be more widely intelligible than the other region-bound varieties of the language.

The first commercial Pashto film was Yusuf Khan Sher Bano, released in 1970. Pashto films started overtaking Urdu ones starting in 1988, and now constitute 17.76 percent of the industry’s output. The common perception is that Pashto films are viewed by men who want to watch raunchy dances. That Pashto films were raunchy may have been true for the initial years of Pashto cinema, but they have become more sophisticated in recent years.

Urdu has been idealised as the superior language, the symbol of a sophisticated, urban civilisation associated with old Lucknow and Delhi.

Pakistan’s ethnic movements, it seems, have had little effect on the patterns of film consumption. Attempts to make Balochi-language films failed, though a few films have been produced in other regional languages such as Gujrati, Saraiki, Hindko and Sindhi. However, English films have always been popular among not only the English-knowing sections of Pakistani society, but also people who do not know the language, perhaps because these films contain exotic scenery, eye-catching photography, and sexually appealing scenes that ordinary people enjoy. According to 2012 figures from the Censor Board of Pakistan, 218 films dubbed from English were released from 2007 to 2012. Incidentally, the only English-language film to be produced indigenously, Javed Jabbar’s Beyond the Last Mountain (1976), was not successful.

The question of ideology

Ultimately, the language of Pakistani cinema is impacted by ideological and instrumentalist factors. Throughout the country, Urdu has been idealised as the superior language, the symbol of a sophisticated, urban civilisation associated with old Lucknow and Delhi. This ideology rules out Pakistani varieties of Urdu with accents affected by Punjabi, Pashto, Sindhi and other Pakistani languages. And yet, these standards remain in the domain of a romanticised and elitist past, and are quietly ignored under the pressure of pragmatic factors, such as the actual intelligibility of a film, which directly impacts its success. In Bollywood, this makes producers choose a language that veers towards the Urdu-end of Hindi in many cases. In Pakistan, the same considerations make producers choose an Urdu that is not excessively Persianised or Arabicised. It also makes them choose the urban variety of Punjabi instead of the regionally-bound varieties that are considered less intelligible across the country. In Pashto films, the dialect is commonly the Yusufzai, or northern, variety, which is common in urbanised areas such as Peshawar.

This is interesting because it suggests that the language of entertainment, especially in films, is not always related to the formal domains of power (the government, military and judiciary). It is also not necessarily related to the domains of formal education and literacy. Rather, pleasure is a realm unto itself, and its languages are internal codes for solidarity, cohesiveness and intimacy. Perhaps this is because the spheres of power, ultimately connected with an alien state removed from peoples’ lives, are for the formal, external and non-intimate aspects of one’s life. But the languages in which people enjoy themselves, tell jokes and indulge in intimate conversation are their mother-tongues, and the languages in which the most successful films are made.

~This article is an extract from the author’s chapter in a book on Pakistani cinema published by Oxford University Press in 2014.

~Tariq Rahman is the National Distinguished Professor of Sociolinguistic History and Dean of the School of Education, Beaconhouse National University, Lahore, Pakistan.