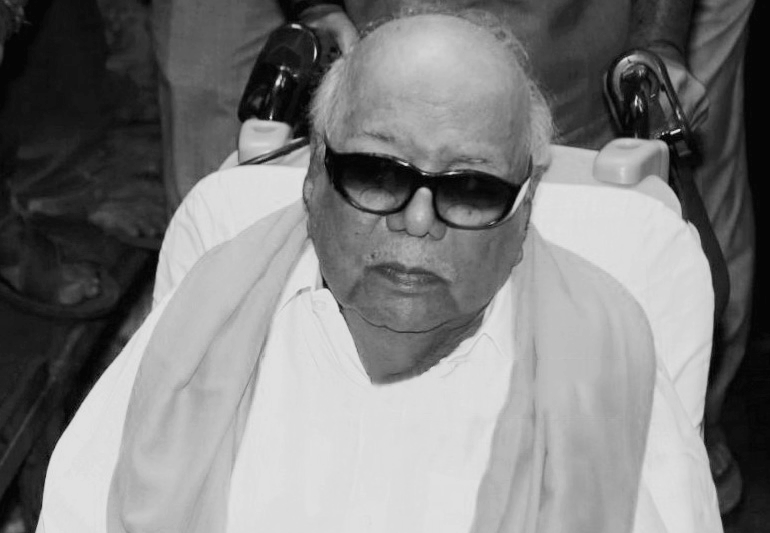 Rajiv Gandhi, then prime minister, wished to solve the problem by persuading the militant groups and the Sri Lankan government to come to the table for a dialogue. Sri Lankan President J.R. Jayewardene didn’t like the Tamil Nadu chief minister MGR and other leaders giving arms and cash to the LTTE. The LTTE, the most ruthless of the groups, was the stumbling block. Since Prabhakaran had received a lot of help from MGR, he was expected to listen to him. But Prabhakaran was not amenable to holding any talks, and MGR asked the Tamil Nadu IGP Mohan Das to confiscate all the weapons given to Prabhakaran. In protest, Prabhakaran went on a fast. Fearing it would upset prospects of a peace accord the Centre announced it was neither consulted nor informed. Karunanidhi too joined the bandwagon and criticized MGR’s orders against Prabhakaran.

While Karunanidhi had often spoken against the LTTE’s violence, he was against the arms being taken back from them, which according to him had been given for their self-defence in the civil war in Sri Lanka.

Faced with criticism from the Centre and fearing the consequences of Prabhakaran’s fast, MGR retreated and the weapons were handed back to Prabhakaran.

India then held talks with the Sri Lankan government to try to negotiate peace between them and the militant groups. MGR, as chief minister of Tamil Nadu, was called for the talks, and asked to negotiate with Prabhakaran. Prabhakaran remained steadfast in his refusal to participate in the peace talks, and MGR returned to Chennai disappointed. Nevertheless, the Indo-Sri Lanka Peace Accord was signed on 29 July 1987 in the presence of the other militant groups in Colombo.

Four days later, at a meeting convened by the Congress party at the Marina in Chennai, MGR (his party was once again an ally of the Congress) lauded the decision to send the Indian Peace Keeping Force (IPKF) to Jaffna for the protection of the Tamils. The same week, on 5 August, MGR left for the US for medical treatment. MGR had been ailing for more than three years and it was clear he would not live much longer.

Under pressure to react, Karunanidhi, once again chief minister, spoke critically of the Indo-Sri Lanka accord and severely condemned the excesses of the IPKF.

Delhi believed that MGR would eventually succeed in persuading Prabhakaran to agree to the accord, but this did not happen. When MGR died on 24 December 1987, a month after his return from the US, Prabhakaran issued a note of condolence: ‘He was like a brother. We could not have grown so much without his help.’

What the Indian government did not expect was that the LTTE and the IPKF would battle each other. Prabhakaran and his followers were convinced that the IPKF had been sent to undermine their position. The general public in Sri Lanka had initially welcomed the IPKF, but with constant conflicts between the IPKF and the LTTE, they were now wary about its presence. The LTTE’s news bulletins carried horrifying accounts of army excesses. Human rights activists and pro-LTTE Tamil nationalists took to the streets of Tamil Nadu.

Under pressure to react, Karunanidhi, once again chief minister, spoke critically of the Indo-Sri Lanka accord and severely condemned the excesses of the IPKF. He had once requested the Centre to send the Indian army to protect the Tamils of Sri Lanka. Now he demanded that it be called back.

In 1989, V.P. Singh became the prime minister, heading the Janata Dal coalition government after Rajiv Gandhi and the Congress were defeated in the general elections held that year. V.P. Singh realized that sending the IPKF to Sri Lanka had been a mistake and asked them to return to India.

Yet why Karunanidhi hesitated to take strict action to curb the militants even when he was in power is a question that remains unanswered.

One of the greatest disasters of Indian diplomacy came to an end on 24 March 1990. IPKF commander Lieutenant General A.S. Kalkat said, ‘We came as a proud force and are leaving as a proud force.’ But in reality the Indian soldiers came back unsung and unwanted, demoralized and disheartened. For over two protracted years the IPKF soldier had fought a war he did not want to, a war he did not understand, a guerrilla war he was not trained to fight. Many saw their colleagues blown to smithereens by landmines. As many as 1155 soldiers were killed and 2984 wounded, according to official figures. In no war had the Indian army lost so many personnel. And it was no longer an official secret that the IPKF was also caught in the crossfire of petty ego battles between the Intelligence Bureau and the Research and Analysis Wing.

The withdrawal of the IPKF was the LTTE’s moment of glory. They had convinced the then president, Ranasinghe Premadasa, that they could talk peace only after the IPKF left. Premadasa fell for the ruse and asked the Indian troops to leave. Clearly the LTTE was back in control. In fact, they were in control even before the IPKF quit. The jawans who returned said they had been holed up in their camps for many days before they left. The Sri Lankan army helplessly looked the other way as aggressive LTTE cadres patrolled the streets.

When the IPKF troops landed in Chennai in 1990 Karunanidhi, who was chief minister, refused to go and receive them. He felt compelled to keep up his image as ‘the protector of the Tamil community’. Though he had expressed his disapproval of the LTTE’s ruthless killings of fellow militants and Sri Lankan leaders, it was a grave misjudgement on his part to have encouraged the LTTE to roam freely and spread their wings in Tamil Nadu, not realizing it would be a threat to the security and sovereignty of the country as a whole. N. Ram observes, ‘There was no love lost between Kalaignar and Prabhakaran’ as he was ‘very moderate and was against violence’. Yet why Karunanidhi hesitated to take strict action to curb the militants even when he was in power is a question that remains unanswered.

~ Excerpted from ‘Karunanidhi: The Definitive Biography’ by Vaasanthi. Juggernaut Books, 2020.

Vaasanthi is one of Tamil Nadu’s best-known writers. Over a career spanning 40 years Vaasanthi has been the editor of India Today (Tamil edition) for nearly 10 years - and published 30 novels and six short story collections, four volumes of journalistic articles and four travelogues in Tamil. Her awards include the Uttar Pradesh Sahitya Sanstan award and the Punjab Sahitya Academi award.