Skip to content
Archives > The making of the marginalised

The making of the marginalised 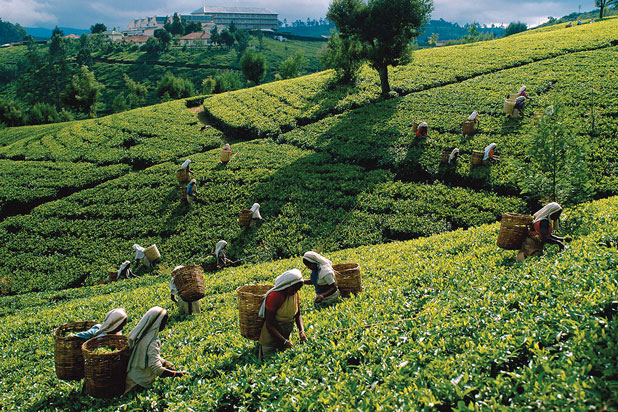 Historical, political and economic analysis of post-colonial Sri Lanka cannot avoid confronting the predicament of the Up-country Tamils, the community brought over as indentured labour by the British first to work on the country’s coffee plantations and then its tea plantations in the 19th and early 20th centuries. From their harrowing journey to Ceylon in slave-like conditions, to the brutalities of estate work, to their disenfranchisement and statelessness after independence, to their displacement within Sri Lanka and part repatriation to India where they endured further torment, the Up-country Tamil narrative is integral to understanding the tragic predicament of modern-day Sri Lanka. Indeed, the building of a post-colonial society known for its social welfare developmental state depended on the exploitation of the very Up-country Tamils whom the state disenfranchised and silenced. Yet, the story of this community and their quandaries has remained largely under-documented.

This gap is filled in part by Daniel Bass’ well-researched and carefully written work Everyday Ethnicity in Sri Lanka: Up-country Tamil identity politics. His work has emerged in Sri Lanka’s post-war era, and one question that guides his anthropological account is whether this era will afford new political opportunities for this historically marginalised community. Bass’ field research spans multiple visits to Sri Lanka and India between the late-1990s to the late-2000s, coinciding with some of the heaviest fighting during Sri Lanka’s armed conflict. He narrates the history of this community and closely records their cultural practices, and his bibliography is an excellent record of works on the estates and the Up-country Tamils. Bass aptly describes how the disenfranchise-ment of the Up-country Tamils was one of the first symptoms of an emergent conflict eventually leading to the war that would ravage the country. Ultimately, he sees the post-war climate as one where reconciliation has not emerged and repression of minorities continues.

The Up-country Tamil predicament is a troubling one. After arriving in what was then Ceylon, Up-country Tamils worked on plantations that, for the greater part of the last century and a half, provided Sri Lanka with its main source of exports and foreign exchange. However, soon after Independence in 1948, Up-country Tamils were stripped of their citizenship, which prompted a difficult struggle for their political rights in the face of their already marginalised social and economic position. The Up-country Tamils’ class position meant they suffered the daily humiliation, harassment and detention by the security forces as the war in the North and East spilled over with bombs and attacks into the Sinhala-dominated South.

Over the years, scholars have debated this community’s particular identity. Are they different from the Tamils resident in Ceylon prior to their arrival? Are they Indian Tamils, as the census in Sri Lanka continues to characterise them? If so, how does one address their political identity given that they have lived in Sri Lanka for generations? Bass settles upon the term most people from the estates like to use for themselves: ‘Up-country Tamils’, a translation of ‘Malaiyaka Tamils’. This distinct identity emerges from this community’s oppression by both the British colonisers and the Sinhala elite, as well as their betrayal by the Jaffna Tamil elite. Not only did the then-leader of the Tamil Congress, G G Ponnambalam, shamefully join the Government even as this community was being disenfranchised, but subsequent Tamil leaderships continued to do little more than pay lip service to Up-country Tamil rights. Indeed, the Tamil demand for federalism, and later for a separate state in the north and east of Sri Lanka, could not accommodate the geographically distinct region of the central highlands, which is home to the Up-country Tamils. While class was a significant factor in their marginalisation, the Jaffna Tamils’ contempt for this community was augmented by the Up-country Tamils’ low caste position.

Bass’ work is valuable in that it documents and unpacks much of the Up-country Tamil political history. For instance, Bass demonstrates how the oppression of this community led to the emergence of a separate trade union and political party in the form of the Ceylon Workers Congress (CWC). The CWC’s major achievement – after decades of agitation, participation in corrupt party politics, and cooptation in coalition governments – was to finally secure citizenship for Up-country Tamils in 2003. The post-colonial Ceylonese political elite’s disenfranchisement of this population was partly an attempt to marginalise the Leftist forces that were organising and gaining ground in the estates. This attack on the Up-Country Tamils was also legitimised by the Indian state a decade and a half later with the Srimavo-Shastri Pact in 1964. This accord agreed that, of the 975,000 stateless Up-country Tamils in Sri Lanka in 1964, 525,000 would become Indian citizens, 300,000 would be Sri Lankan citizens, and the fate of the remaining 150,000 was to be decided later. However, despite this agreement, the Up-country Tamils who were repatriated faced great hardship in India due to a disorganised and exploitative settlement plan. Many of those who remained in Sri Lanka were displaced to the North in the late 1970s and into the 1980s, becoming cannon-fodder in the armed conflict and in many cases being forced to seek refuge in India after a dangerous boat crossing. Even after the war, many among the landless and displaced in the North are Up-country Tamils.

In addition to researching and presenting this harrowing narrative in great detail, Bass also incorporates many compelling interviews with a wide range of actors, including officials, activists, academics, and people living on the plantations. He interviews many of those who were repatriated to India, and those who remained in Sri Lanka, uncovering haunting stories of families torn apart. Bass engages with women who have been separated from their families through marriage or otherwise, and who struggle to rebuild their lives, thus bringing to light the community’s continuing social predicament. It is also these interviews that highlight the hybrid character of Up-country ethnicity: a Sinhala woman married to a Tamil man finds herself ‘repatriated’ to India, while her mother, who has not seen her in decades and is heartbroken by the separation, remains in Sri Lanka. Bass, through his journey to India and back, brings messages of long lost relatives with great sympathy.

Bass’ weakness, however, is his over-reliance on his ethnographic research in making claims about the construction of Up-country Tamil identity. His anthropological preoccupation with ‘culture’ and ‘diaspora’ diminishes the strong historical narrative in the rest of the book. His emphasis on ethnic identity and its construction is indeed important, but the book overlooks other important factors – such as the political economy and the class and caste relations of the estates – that also shaped the emergence of a unique Up-country identity. As ethnographic accounts are dependent on the contingencies of fieldwork and the anthropologist’s engagement during a limited and specific time period, they should be used with care in constructing broader narratives.

In one instance, Bass discusses the productive nature of culture, especially in regard to changes in the practice of religious festivals, and the effect these changes have on the transformation of identity. There are problems with this approach, and the concepts Bass employs need to be further unpacked. I was left unconvinced by Bass’ approach to analysing religion and its relationship to meanings, and to the question of whether religion is about the construction of meanings or about actual practices. Indeed, religious practices and festivals do change over time, but such changes do not necessarily mean changes in the identities of those who practice them.

If the nationalists silenced subaltern struggles in their writing of history, cultural anthropologists writing on culture and identity pose a similar danger

Bass’ emphasis on ‘culture workers’, those he claims do the work of producing ‘culture’ and constructing an independent Up-country Tamil identity, also requires scrutiny. Bass does not clearly state who these ‘culture workers’ are. One infers that he may mean NGO workers, including those at an unspecified Centre with which he was associated in the town of Hatton in Sri Lanka’s Hill Country, as well as those who have been involved with Up-country Tamil drama, talent shows and the like. These culture workers happen to be his sources, which raises the question as to whether his anthropological engagement has narrowed his analysis of broader social, economic and political processes. The more important point that Bass does not address is the emergence of NGOs as social and economic actors within Sri Lanka. Bass’ analysis does not address the ways in which neoliberal economic policies promoted the rise of NGOs, and how they relate to the failure of states like Sri Lanka in addressing the concerns of marginalised communities. Indeed, such analysis might find the NGOs and their role in producing ‘culture’ as part of the continued problem of marginalisation of certain communities.

I question whether it is cultural work that has transformed Up-country Tamil identity, or whether their identity is the consequence of socio-economic exclusion and lack of integration into Lankan society. Legitimising ‘culture workers’ as developers of identity leads to a problematic silencing of the dynamics surrounding subaltern politics. Everyday forms of resistance, wildcat strikes on the estates, and the struggles around urban wage work are also powerful factors in shaping Up-country Tamil identity and politics. It is not that community organisers, NGO workers and other cultural workers are unimportant. Rather, there needs to be a deeper examination as to how they have appropriated Up-country Tamil identity and claim positions of representation. This gets to the important issue of how the power of such actors is linked to national and global circuits of knowledge production and representation, and how this affects emergent identities. If the nationalists silenced subaltern struggles in their writing of history, cultural anthropologists writing on culture and identity pose a similar danger. This is an important concern given that scholarly engagement with Sri Lanka continues to be dominated by the vast corpus of anthropological writing on the country.

I would argue that Up-country Tamil identity is produced and sustained by the community’s subaltern politics, the history of imprisonment between two warring Lankan nationalisms, their abandonment by both the Sri Lankan and Indian states, and their exploitation and exclusion by a brutal economic system. Even if one disagrees with Bass’ theoretical and somewhat uncritical anthropological orientation, he should be commended for his engagement with Up-country Tamil history and politics, particularly when much mainstream Western analysis reduces Sri Lanka to a site of ethnic conflict between the Sinhala and Tamil communities. Scholarship on the country has hardly attempted to engage with Up-country Tamil politics. Bass’ work can provide impetus for critical social research and debates on the community’s politics and the political economy of the estates. Bass has, in this sense, made an important contribution, which all those concerned with Sri Lankan politics, and particularly with the marginalisation and exclusion characterising Up-country Tamil life, should make an effort to read.

Ahilan Kadirgamar is a democratic activist and a researcher of political economy based in Jaffna, Sri Lanka.