Skip to content
Sri Lanka > The paars of Mannar

The paars of Mannar

Although things have gone quiet for the past half-century, the pearl fishery of Ceylon was known around the world for millennia. 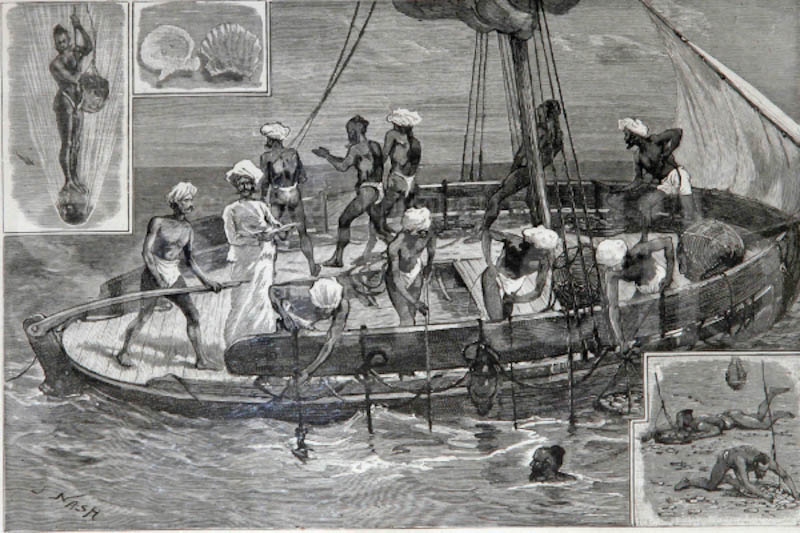 The divers were predominantly Tamils or Arabs. Some plunged headfirst from springboards; some descended in an upright position, carried down rapidly by a stone or lead weight. They worked in pairs; one diver remained on the surface, along with an assistant or munduck who watched over the ropes attached to the weight and the basket in which the oysters were collected. When ready to descend, the Tamil diver pinched his nostrils shut, while the Arab diver used a horn clip.

Of the world’s great pearl fisheries, none can compare with the fishery of the Gulf of Mannar. Over 3000 years ago, pearls were one of the principal sources of revenue of the Tamil kings. In ancient Rome, the author and philosopher Pliny referred to this fishery as the world’s most productive. The Greeks, Venetians and Genoese all sought the beautiful specimens harvested in these waters. The Pearl Banks (paars) stretch from the island of Mannar, off the northwestern tip of modern-day Sri Lanka, south to Chilaw, at depths ranging from five to 15 fathoms. The shallow undersea plateau on which the banks are located varies from 32 kilometres wide in the north to six km in the south. Traditionally, each of the 50 or so banks bore a unique name, the most productive being the Cheval and the Moderagam.

Pearl fishing was such an important industry that it was a government monopoly from the earliest times. There were two distinct fisheries – one on the South Indian coast, the other on the Sri Lankan coast, in Mannar. However, the fishery off Mannar was considered the most important. Megasthenes, the Grecian ambassador to the court of Chandra Gupta in the third century BC, asserted that this fishery produced larger, better quality pearls.

In colonial times, divers did their work from 15-ton dhows from the Persian Gulf, which carried a crew of 14, along with ten divers. The fleet, often numbering 400 boats, left for the Pearl Banks in the early hours of the morning. ‘The boatpeople are raised from their slumbers by the noise of horns and tom-toms, and the firing of a field-piece,’ remarks one James Cordiner in A Description of Ceylon (1807). After going through what Cordiner describes as ‘various ablutions and incantations’, the pearl divers set sail for the Pearl Banks, guided by pilot boats. By sunrise, the fleet was anchored in position around a barque carrying a government ‘inspector’ of the Pearl Banks. An hour after sunrise a gun was fired, which gave the signal for diving to commence.

On reaching the bottom, the diver slipped the noose of the basket over his head, and swam over the bank collecting the oysters. After about a minute, the diver below gave a tug on the basket rope. Instantly, two munducks hauled up the rope, along with the diver. Upon being brought into the boat, the divers would discharge water – and, sometimes, blood – from their mouth, ears and nostrils. After a few minutes of rest and the diver was ready to descend again, and would only let his comrade take his place when he had completed eight descents. In this manner, a single diver could gather 3000 oysters in a single day.

Sharks represented the main danger to the divers. Being superstitious, they always consulted ‘shark-charmers’ or ‘shark-binders’ before commencing work. Indeed, the divers would not venture into the sea until they had received assurance that ‘the mouths of the sharks would close at their command’. As the shark-charmers belonged to a certain family, they were able to monopolise the business, and there were at least two or three shark-charmers in attendance at every fishery. One would go to sea in the head pilot’s boat, while the others would perform rites on the shore. One such required the shark-charmer to strip naked and shut himself in a closed room. There, he would sit before a brass basin full of water obtained from a secret well on a distant island, in which were placed silver replicas of a male and female shark. If a shark attack was going to take place, it was believed, one shark in the basin would bite the other. Sometimes the charmers indulged in toddy until they could no longer stand. Nevertheless, they were considered so indispensable to the success of the fishery that they were paid by the government in addition to receiving a daily tithe of oysters from each boat.

After a midday signal, work was ceased and the boats headed for Silavatturai, in northwest Sri Lanka. There, the divers carried their catch into the kottu, or oyster store, and deposited it in three equal heaps inside a compartment. The colonial superintendent then chose two of the heaps as the government’s share, leaving the remaining one for the diver. (The government shares were put up to auction.) The oysters were then placed in pits by the sea, where they were allowed to decompose for ten days, after which the remains were rinsed and the pearls picked out and graded, and finally drilled. The bulk of Ceylon pearls, which were valued for their golden hue, found their way to Bombay. There, most were strung onto ropes and thereafter sent to brokers and dealers, especially in London and Paris.

In Sri Lanka, the pearl fishery was first mentioned in ancient chronicles such as the Mahavamsa, which records the gift of pearls to the king of Madurai. From the Rajavali, we learn that, in what appears to have been a third-century tsunami, ‘100,000 seaports, 970 fishers’ villages, 400 villages inhabited by pearl fishers, making altogether eleven-twelfths of the territory, which belonged to Calany, were swallowed up by the sea.’

On Marco Polo’s return journey to Venice, in 1284 he landed in the port city of Puttalam, also on the edge of the Gulf of Mannar. There, he met with Arya Chakravarti, the ruler of the area, which included a pearl fishery. Odoric, a Franciscan who visited the island sometime between 1316 and 1330, wrote, ‘In this Island are found as great a store of pearls as in any part of the world. And the king of that country weareth round his neck a string of 300 very big pearls, for that he maketh to his gods daily 300 prayers.’ The Moroccan explorer Ibn Battuta also had an audience with Arya Chakravarti at Puttalam, in 1344. He writes:

I entered his presence one day when he had by him a quantity of pearls which had been brought from the fishery in his dominions … [He] took up some pearls and added, ‘Are there at that island any pearls equal to these?’ I said, ‘I have seen none so good!’‘

Under the British administration of the 19th century, the inspector of the Pearl Banks examined the coastal stretch from Mannar to Chilaw twice a year, in order to identify the fishable oyster beds. If the pearls were sufficiently numerous, a fishery was proclaimed for the following spring, February through April. Until 1889, the fishery headquarters were located at Silavatturai – ‘the port of the pearl fishery’ – in normal times a lonely place on the coast south of Mannar. But once a fishery was established, a town arose from the windswept sands, with official buildings built along thoroughfares known by such names as Main Street, Tank Street and New Street.

Countless divers, traders and shopkeepers set up huts on the peripheries of this town, which by then boasted a cosmopolitan population of 50,000. In An Account of the Island of Ceylon (1803), Robert Percival writes of how a ‘desert and barren spot’ was ‘converted into a scene which exceeds, in novelty and variety.’ Residents of the town, Percival noted, were ‘of different colours, countries, castes and occupations’. A traveller could chance upon ‘jugglers and vagabonds of every description practising their tricks’ in one corner of town, while in another, ‘he may observe Fakeers, Brahmins, Priests, Pandorams [pandaram], and devotees of every sect.’

The Portuguese took control of the pearl fishery in 1524 by entering into a pact with the Parawas, a caste of sea-going Tamils who had managed the harvesting for the kings of South India from time immemorial. The revenue generated by pearls was considerable during the 16th century. When the Dutch expelled the Portuguese in 1658, they set out with characteristic thoroughness to develop the commercial resources of the island. As a result, the pearl fishery was resumed in 1666, reportedly employing some 200,000 persons. Although the income from pearls became second only to cinnamon during Dutch rule, imperfect prospecting resulted in lengthy intervals between fisheries. In 1746, after only eight successful harvests, the governor of Ceylon decided that the fishery would be improved if it were rented out to private interests. This system proved so satisfactory that it was employed until a few years after the British ousted the Dutch in 1796.

While rich pearl harvests characterised the early period of British rule, from 1809 a series of failures occurred, in spite of better appliances, charts and methods of inspection. Subsequently, in 1900, the decision was made to revert to the system introduced by the Dutch, so from 1907 the fishery was leased to the Ceylon Company of Pearl Fishers. The lease experiment proved unsuccessful, as the supply of oysters failed. This misfortune, coupled with the 1920s introduction of the cultured pearl by Mikimoto Kokichi, a Japanese entrepreneur, dealt a mortal blow to the industry. Still, fishing continued until the late 1950s, when traditional methods were abandoned and dredges used instead. Since then, however, the Pearl Banks have remained largely undisturbed, especially during Sri Lanka’s civil conflict.

There is little physical evidence left to indicate that the fisheries were held for centuries along this desolate yet beautiful coast. However, under certain conditions – in the right light and with the sun at a low angle – the long shore apparently still glitters with ancient, abandoned shards of mother-of-pearl.