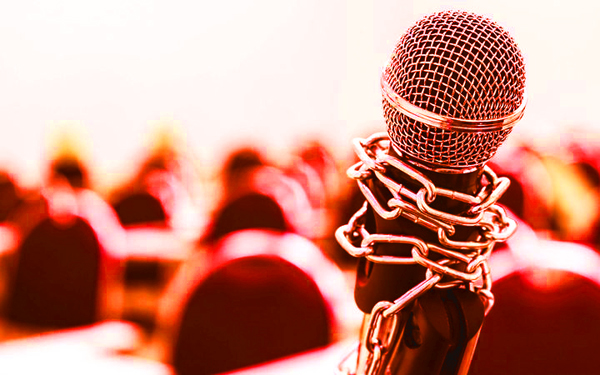 On 27 October 2019, the Pakistan Electronic Media Regulatory Authority (PEMRA) issued fresh directives to media houses asking them to ensure that TV news anchors refrain from giving “opinions” on air, and that only “experts” with the “requisite knowledge” talk on subject matters of their expertise. The notification added that news channels should avoid discussing, analysing or speculating on sub-judice matters, and that they would be “held responsible for any biased, unfair analysis or propaganda against judiciary and state institutions”. In effect, a government entity was trying to dictate who spoke on what issues, and who qualified as an expert, an analyst or a journalist.

In response, several journalists demanded that PEMRA withdraw the notification, calling it a ‘dictatorial’ move to gag the press. PEMRA issued a counterstatement, claiming that the advisory did not intend to control who participates in talk shows. The advisory was merely reiterating the parameters of PEMRA’s existing laws and codes of conduct, the government body stated.

Meanwhile, the courts have been involved in the matter as well. Two days after the notification, the Islamabad High Court issued a notice of contempt against PEMRA for implying that the directive was based on the court’s instructions. On 30 October, responding to a petition filed by news anchors challenging the PEMRA directive, the Lahore High Court ordered the regulatory body not to take any action against TV anchors until further orders.

While the latest court decisions have given Pakistan’s journalists some reprieve, the PEMRA directive adds to a pattern of growing restrictions on media in the country, which currently ranks 142 out of 180 countries in the World Press Freedom Index compiled by Reporters Without Borders. From unannounced censoring of TV interviews and government constraints on covering opposition rallies, attempts at censorship have gone beyond targetting media houses, to social-media campaigns against individual journalists. In September 2019, the Pakistan cabinet approved a plan to establish ‘media courts’ that would try media-related cases with the aim of expediting their conclusion within a period of 90 days. As the proposal was brought in without any consultation with the media and civil society, it further compounded existing concerns about censorship and curbs on free expression in the country.

The censure of the media and the disturbing record of press freedom in Pakistan have been met with opposition from members of civil society. But the government has not budged from its intent. Despite the decline in violent attacks on journalists, and a growing media industry, the crackdown on journalists persists in the form of intimidation and pressure from the military in newsrooms. Reporting on dissent and politically-sensitive issues is difficult, and stories like the latest salvo from PEMRA don’t usually make it to the front pages. As the privileges afforded by the democratisation of information are being undercut around the world, Pakistan falls further behind through its attempts to vilify journalists and those dissenting from the pro-state narrative.

With research and input by editorial intern Shwetha Srikanthan.