The Right-Side-Up Map of Southasia

For parallel identities in Southasia, beyond the nation-states 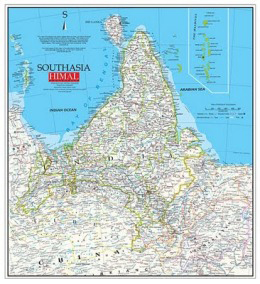 The Right-Side-Up Map of Southasia, designed by Himal Southasian in 1998. Go to our membership page to get your personal copy.

This map, the work of artist (and cartographer!) Subhas Rai, is Himal Southasian’s response to the nation-state centred discourse that has all of us in its grip. The countries of Southasia are relatively new entities – barring a couple of non-colonised states – no more than six decades old, and yet ultra-nationalism has evolved as the most important ‘ideology’. Despite the layered identities, which is the shared historical legacy of all of Southasia from Kabul to Yangon and Lhasa to Colombo, the primary identity we are all forced to wear is of being ‘Indian’, ‘Pakistani’, ‘Bangladeshi’ and so on, depending on which country’s borders constrain us. But, in the process of putting out Himal as a Southasian magazine since 1996, the editors have realised the limitations of such exclusive identity formation. It leads towards radical populism, puts politicians on the defensive and energises demagogues. Further, nationalism tends to neglect the various parts of each country while privileging the capital cities.

On the whole, while wishing no harm to the nation-states amongst us, Himal believes in the reinstatement of parallel identities, including at the local, provincial and regional levels. The nation-states are locked into our minds through the medium of maps. The sharp boundaries remind us again and again of individual countries rather than the historical continuum in which there was such intimate mixing. So, how could we tweak the map to say what we wanted to say?

This map of Southasia may seem upside down to some, but that is because we are programmed to think of north as top-of-page. This rotation is an attempt by the editors of Himal to reconceptualise regionalism in a way that the focus is on the people rather than the nation-states. This requires nothing less than turning our minds downside-up.

Get get a personal copy of the right-side-up map delivered to your home.