The road to Khajuraho

The origins of erotica in the Subcontinent's religious art. 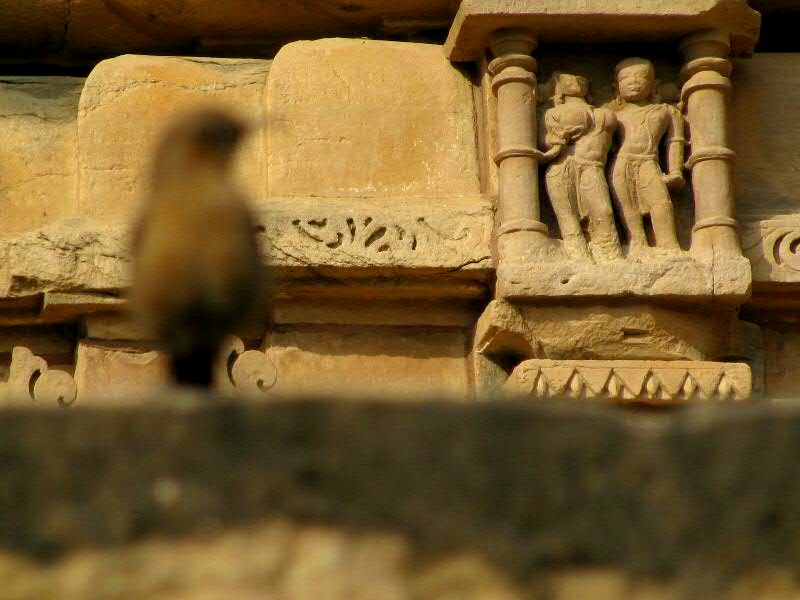 The basic idea of fusing sexual and religious imagery has appeared in many parts of the world. Folk religions often evoke new life and rejuvenation through magico-religious symbols and acts. In India, the earliest such surviving imagery dates from the Harappan times, such as the phallic statues of Dholavira. The Mauryan period has turned up many small terracotta plaques, likely used as votive offerings to popular fertility goddesses like Sri. These plaques have symbolic—non-erotic and non- amorous—depictions of male–female unions, believed to be auspicious for fertility and abundance (a similar idea inspires the likely even older iconography of yoni–lingams). But by the start of the Common Era, such plaques had evolved so that they started carrying realistic sensual images, including plainly carved amorous and copulating couples. It’s likely that they still served the same votive purposes, perhaps in addition to being decorative objets d’art.

The earliest known fusion of sexual and religious imagery in stone in the subcontinent is on Buddhist monuments at Sanchi and Bharhut (second century BCE). Even though these earliest depictions were tame— non-erotic and non-amorous—it’s safe to say that the inspiration for them did not come from the sex-negative Buddha. Rather, it arose from the syncretic milieu of the builders and their simultaneous embrace of many folk cults, including of yakshis and Sri, alongside the teachings of the Buddha.

In ensuing centuries, partly influenced by Graeco-Gandharan art, a  greater sense of realism and sensualism became more common in monumental stone art. Seemingly secular and worldly themes—such as bacchanalian scenes with drinking, dance and music—began appearing on panels next to evidently religious images. The fertility theme was now evoked using heterosexual couples ‘kissing, embracing and [indulging in] other precoital activities’. They also symbolized kama, or desire, which sustains the world.  Incrementally,  the  ‘cultic function was superseded by the aesthetic and the sensual’. In the early centuries of the first millennium CE, amorous (but non-coital) couples became an auspicious and decorative motif (alankara) on entrances of temples and monasteries of all major religious sects across India.f

Clearly, as Devangana Desai writes, ‘the social climate of the time’ must have ‘encouraged the use of the erotic motif as a form of embellishment in religious art’. The tastes of the elites shaped this art, but it must also have been continuous with earlier symbols to have resonated with the townsfolk and the peasants who visited these temples. Even as the motif of amorous couples grew more realistic, it would still have signalled  to the average visitor a sense of beauty, divine order, abundance, auspiciousness, fertility and propitiatory power. In other words, the sensual images were meant to comfort—not offend or challenge—the sensibilities of the temple-goer. (Curiously, some images we might associate with fertility are rare or non-existent on these temple walls, such as pregnant women, women giving birth or women with babies.)

What were the shared foundations and pillars of this aesthetic?

It’s safe to assume that the art was an expression of an aesthetic that was already common in the realm and was broadly shared with the legions of sculptors and the wider public.

To understand what all this explicit sex on temples meant to their creators, we must try and enter their world and imagine it from within. To do this, let’s begin with three fairly simple and uncontroversial premises. First, the sponsors of explicit erotica on temple walls clearly saw it as compatible with depictions of the divine. Second, these temples were public monuments and places of worship, commissioned by the royals not to shock, outrage or confuse people but to communicate a stable vision of life and to acquire merit, fame and legitimacy. Third, since the temples were built over 250 years by multiple kings, this vision wasn’t just driven by a small coterie of reformist royals—a revolutionary vanguard determined to broaden people’s sexual horizons. Rather, it’s safe to assume that the art was an expression of an aesthetic that was already common in the realm and was broadly shared with the legions of sculptors and the wider public. The scale of these monuments meant that vast resources of Chandela society were marshalled for it, involving many classes of people, whose enthusiasm was essential for success.

If we accept these three premises, we can then ask: What were the shared foundations and pillars of this aesthetic? What was the world view that gave rise to these ‘ecclesiastical erections’, in the memorable words of T.S. Burt?

~ Excerpted from Indians: A Brief History of a Civilization by Namit Arora. Published by Penguin India Viking, 2021.

Namit Arora is a Delhi-based essayist, travel photographer, documentary filmmaker, and former Internet technologist. He is also the author of 'Indians: A Brief History of a Civilization'. (www.shunya.net)