Skip to content
Reportage > The shackling of community radio

The shackling of community radio 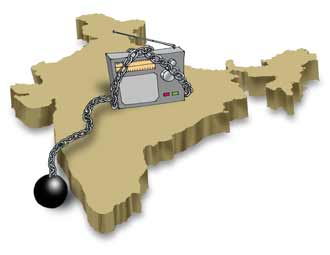 After India’s first, rather grudging, opening of the airwaves for community use in December 2002, it took four years of intense effort by advocacy groups to obtain a policy even halfway meaningful. But when the fine print of the fresh set of guidelines on community radio (CR) services – issued last December – was studied, it became clear that the eligibility criteria laid down in the policy left significant room for ingress by bodies that have little to do with the purported aims of community radio. Worse still, the restraints that had been placed on those with the necessary credentials could, conceivably, entirely defeat the intent of CR. Viewed in substantive terms, the official announcement achieved little more than meeting the formal requirement of being a policy. This should count a dubious gain when viewed against other experiences in the neighbourhood – particularly in Nepal, but also to some extent in Sri Lanka – where community broadcasting has contributed significantly to the quality of the public discourse, despite lacking the benediction of official policy.

The constitutional position in India, as established in the Supreme Court judgment in the 1995 Cricket Association of Bengal v the Ministry of Information & Broadcasting, is very clear: the airwaves belong to the public, and the government has no enduring rights of ownership, even if it has for historical reasons established a custodial monopoly over the broadcast spectrum. This judgment also stipulates that the allocation of rights over the spectrum needs to be done by an independent group that is attuned to, in some manner, the public interest.

Over the past decade, acknowledgment of the significance of the so-called “airwaves case” has been rather slow and sporadic. Viewed against the judgement’s criterion, however, the new community-broadcasting policy warrants little self-congratulation. It could be viewed as the partial restoration of an inalienable right of the people, which has long been denied by the state. But that still leaves considerable more ground to be covered before a full restitution of rights is obtained.

Clearances, conditions, scrutiny
With the position in law being unequivocal, why did New Delhi dither until 2002, and then bring in a policy that reserved community-radio licences only for “well-established education institutions”? Furthermore, why did it wait another four years to open the window of opportunity a crack, while still requiring CR applicants to meet a number of stringent conditions?

In the case of aspirants other than publicly funded and managed educational institutions, sanction for entering the community-radio domain would be subject to clearance from two ministries of the union government – home affairs and defence – not to mention the allocation of a radio frequency by yet another. Such procedures aside, CR operators would remain subject to ongoing scrutiny. Programmes broadcast over their stations are enjoined to serve a “specific well-defined local community” and to be relevant to the “educational, developmental, social and cultural needs” of that community. The guidelines in this manner confine “community” to a territorial definition – a specification that does not measure up to international best practices, which permit other forms of community identification, such as the occupational.

Advocacy groups had demanded that any CR policy, by definition, should not encumber broadcasters-to-be by laying down onerous eligibility conditions. Rather, the government was urged to allow for maximum freedom by specifying nothing more than a narrow list of ineligibility criteria.

Broadcasts that relate to “news and current affairs and are otherwise political in nature” are specifically proscribed over community broadcasts. Sponsored programmes will likewise not be permitted, except where the sponsor is an arm of the government. Advertisements and revenue-yielding public announcements would be permitted to the limit of five minutes in an hour’s broadcast. All earnings would need to be used in meeting operational and capital costs. If available, a surplus could, with the explicit written permission of the information ministry, be transferred into the primary activity of the organisation running the service.

It is among the most mystifying aspects of India’s new broadcast policy that content restrictions are the most rigorous where community ownership, in the broadest sense, is involved. Satellite-television broadcasters – uplinking from or beaming content into Indian territory – have for long been under no restraint as far as news, current affairs and explicitly political content are involved. It was only in 2003 that New Delhi, roused from its stupor by the unyielding pressure of home-owned broadcast companies, decreed that foreign equity in companies engaged in “news and current affairs” would be limited to 26 percent. As foreign broadcasters (spearheaded by Rupert Murdoch’s creativity) began conjuring up newer techniques of evading ownership limits, the Indian government felt compelled to continually tighten up enforcement mechanisms. Nonetheless, it is a fair surmise today that overseas enterprises have largely succeeded in dodging all efforts at restraining their stakes in companies directly engaged in broadcasting supposedly sensitive, political content in India.

Oligopoly FM
This regime of default-disguised-as-policy provides an instructive companion narrative to that which is prevalent in the realm of private radio broadcasting. In July 2005, policy guidelines were announced under which bids were invited for the second round of allocation of FM broadcast “circles”, or geographical areas. While reluctant to yield their monopoly over the airwaves to any form of community control, New Delhi policymakers showed a greater inclination to treat their trusteeship over the spectrum as a resource to be milked for the greatest profit. Under the tendering principles drawn up, allocations were to be made on the strength of the entry fee offered by each bidder. Moreover, a share of annual revenue would be paid by the operator as a fee for the use of the broadcast spectrum. Advertisements would be the principal revenue source, but there would be no limit imposed on the quantum of advertising that each broadcaster could carry.

After the subsequent bidding for FM licences, the vast majority was granted to companies or entities that were already strongly established in other media sectors. Entertainment Networks (India) Ltd, a company owned by the Times of India Group (the largest print-media enterprise), won 25 FM broadcast circles, to add to the seven that it was already running under its brand name, Radio Mirchi. South Asia FM Ltd, a company controlled by the Madras-based satellite broadcaster Sun TV, won 23 circles in the northern part of the country – apart from the 18 it won in the south through its affiliate company, Kal Radio Ltd. Sun TV, it should be added, had in early 2006 also bought up the newspaper Dinakaran, then ranked third in terms of readership in Tamil Nadu.

These are, of course, only the most conspicuous examples from the last round of FM radio licensing of how “cross-media ownership” restrictions are being continually shredded. In doing so, the pathway is being opened even wider for growing business monopolies in the media. Illustrative of the many other such cases are: the Rajasthan Patrika group, a significant newspaper player in the state, being awarded four FM circles; Malayala Manorama and Matrubhumi, the two largest newspaper groups in Kerala, gaining four each in their home state; and the Mid Day group of Bombay being given six circles, all of them in highly lucrative metropolitan cities. HT Media and Entertainment, a company controlled by the Hindustan Times Group – with its significant print-media presence in Delhi and Bombay – was awarded radio licences in both of these cities, with Calcutta and Bangalore thrown in as a bonus.

Beyond this story of consolidation by the media giants, a significant new presence was entering the scene. Adlabs Films Ltd, flush with an infusion of funds after its takeover by the Reliance-ADAG group (one of India’s largest industrial conglomerates), won no fewer than 45 circles in the most recent round of FM allocations. All in all, these blatant concessions to corporate control over the airwaves should be seen in the context of existing global norms on cross-media ownership restrictions. Indeed, these norms have been repeatedly affirmed in India by broadcast legislation that, curiously, seldom makes it beyond the first drafts.

It might appear that an oligopoly of private broadcasters – however small in number – would be far preferable to a government monopoly. Interestingly though, in the doctrine of fundamental rights laid down by India’s Supreme Court, the fact of monopoly ownership over broadcast platforms does not in itself constitute a curb on the twin rights of information and free speech. It is only from the denial of public access to the broadcast media that such an abridgment of rights could be deemed to occur. In other words, the existence of a monopoly broadcaster does not in itself negate free speech, provided that the right to public access is still ensured. The dominant idiom in media regulation in India, however, seems to view corporate control over the broadcast spectrum as a surrogate for public ownership. Meanwhile, the public’s access
to the airwaves, where it is allowed, would need to be mediated through an array of bureaucratic controls – in effect reducing the principle to a nullity.