Skip to content
Crossborder > The Southasian Conversation: Women in media

The Southasian Conversation: Women in media

A podcast conversation on how women in media negotiate Southasia's public and professional spaces. 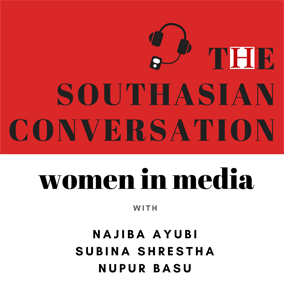 Once perceived as neutral, journalists are being increasingly targeted deliberately, often in violent attacks. In 2017, 65 journalists were killed, ten of them women. Women journalists face additional challenges, their very presence in public spaces often provoking hostility, and the new threats from cyber-violence impacting them disproportionately. When three well-established media professionals – Najiba Ayubi of Killid Group from Kabul; Subina Shrestha, a journalist and filmmaker from Kathmandu; and Nupur Basu, an independent journalist and documentary maker from Bengaluru – came to Colombo last week, we in Himal thought it a good opportunity to engage them in the first of a series of new podcasts called The Southasian Conversation.

In a freewheeling conversation that crossed borders, we debated, discussed and disputed several topics including how we navigate public spaces, counter cyber-bullying, and whether the #MeToo movement has had an impact in our backyards.