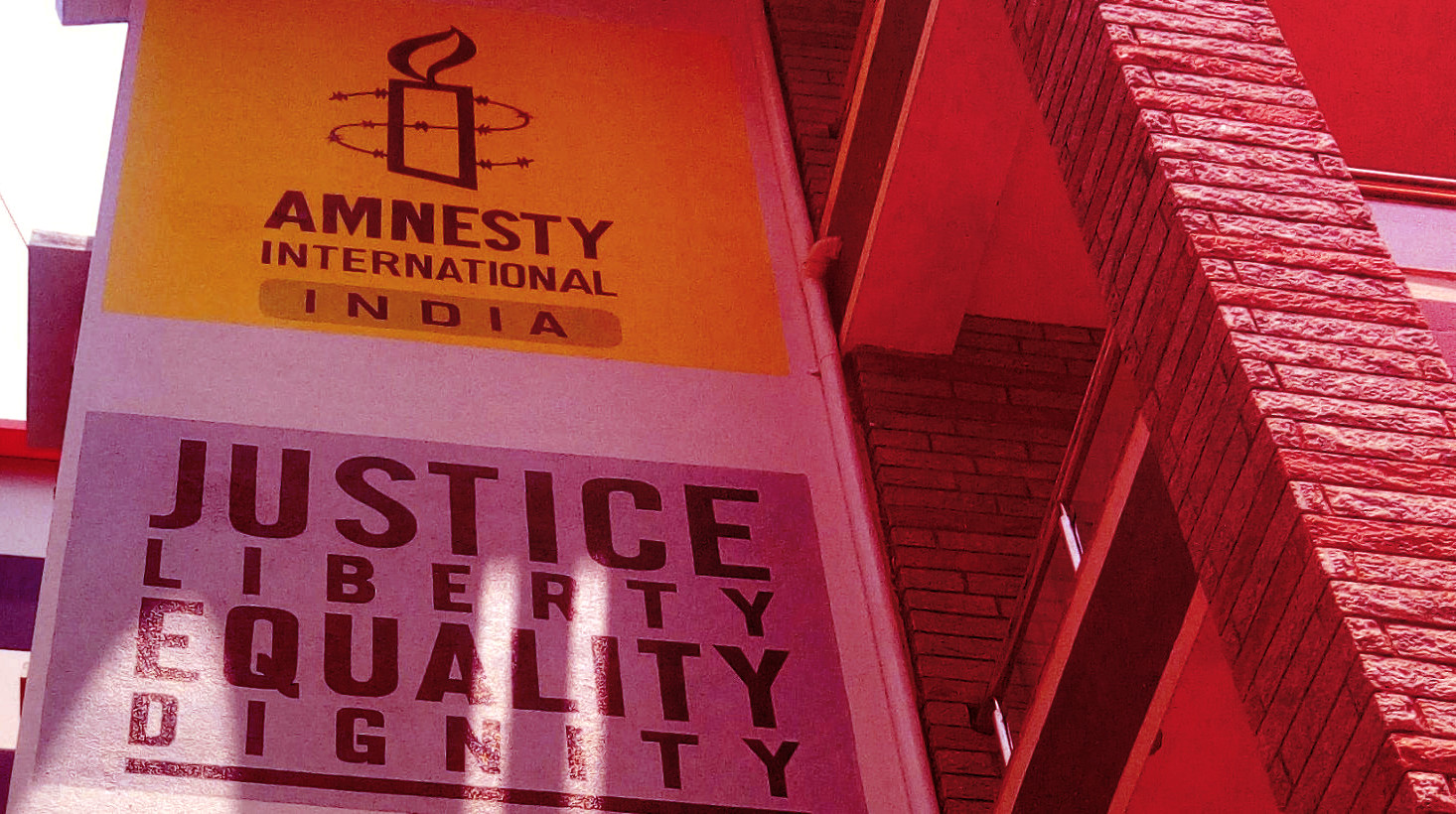 The state of suspension

The closure of Amnesty India is a rude reminder of the growing antipathy towards political freedoms and dissenting voices in the country.

Santosh Yadav was in a crowded bus speeding towards Kanker, on his way to meet journalist Kamal Shukla, when I had called him in late September 2020. Only a few days ago, Shukla was thrashed by a mob in public for his scathing reports and social-media posts on the sand-mining mafia flourishing in the Congress-ruled state of Chhattisgarh. The editor of an independent daily, Shukla was one of the few journalists in the state who stood up for Yadav when he was arrested in 2015 under false charges of colluding with Maoist rebels. Stringers like Yadav, who work in conflict areas like Bastar, are hardly recognised as journalists, even by the newspapers they toil for.

I was the first to tell Yadav that the Amnesty International India office had officially been shut down after the central government froze their accounts in September 2020. He sounded the least surprised. “This is what happens if anyone helps journalists or Adivasis,” he said. The human-rights ‘watchdog’, as Amnesty International has often been referred to by the media, has been documenting and exposing the Indian government’s rights violations since the 1970s, but perhaps most meticulously since 2013. Their work has ranged from documenting human-rights violations by the armed forces personnel in Kashmir, to research on the acquisition of adivasi land by a public-sector company in central India. Last year, Amnesty had also criticised how the foreigners’ tribunals in Assam had been arbitrarily declaring residents foreigners, and was sending them to detention centres. Most recently, in August 2020, they published a report on the glaring impunity that the Delhi Police appeared to be enjoying, despite evidence of their complicity in the February 2020 Delhi violence. More than 50 people were killed in the riots, and hundreds were injured or displaced from their homes – most of them Muslims.

Naturally, this has earned them little favour with governments, both past and present. As a result, rights groups like Amnesty, and individuals associated with it, were being dubbed ‘anti-national’ way before it became a fashionable accusation hurled at journalists, students, lawyers, and even Bollywood celebrities.

The suspension of Amnesty India comes at a time when India’s Bharatiya Janata Party-led government stands accused of harassing a wide range of dissenters, including activists, academics, journalists and researchers. This shrinking of civic space in India is a rude reminder that scrutinising the state’s activities and seeking accountability for its actions is becoming increasingly difficult in India. But it also raises some serious questions about the complicity of others, including the sensationalist mainstream media, in enabling this environment.

In 2015, Santosh Yadav was arrested and detained under the Unlawful Activities Prevention Act (UAPA) and the Chhattisgarh Special Public Security Act, allegedly for collaborating with the state’s Maoist rebels. In truth, he was targeted for helping tribal residents in Bastar, who are often harassed and treated without due process for similar allegations. As a freelance journalist covering the Northeast region, which includes places categorised as ‘disturbed areas’, I appreciate the risks and challenges of Yadav’s work much better than I did three years ago when I was working at Amnesty International’s India office. He was among several human-rights defenders, such as Irom Sharmila, whose cases Amnesty had rigorously researched and campaigned for.

The suspension of Amnesty India comes at a time when India’s Bharatiya Janata Party-led government stands accused of harassing a wide range of dissenters, including activists, academics, journalists and researchers.

When we last spoke on the phone, the National Investigative Agency court had acquitted Yadav and he was glad the harassment was finally over. However, the situation is less optimistic for many activists, rights defenders, journalists and a variety of public-spirited individuals who have been critical of the Modi government, and are now facing concerted attacks from the state. Most recently, this list includes several human-rights lawyers, scholars and activists, including Sudha Bharadwaj, Anand Teltumbde, Gautam Navlakha, as well as Umar Khalid, Sharjeel Imam, and other students, activists and academics who protested India’s new citizenship law, who have been jailed under the UAPA that Yadav too was once made the victim of. “By shutting down Amnesty, they [the government] will now freely go after anyone who speaks out against them” he said. “With people like Sudha ji also in jail, we are at great risk.”

Over 2000 kilometers away in Imphal, a human-rights lawyer was just as worried about Amnesty’s closure. “It’s a blot on India’s democracy,” said Babloo Loitongbam, “that the government cannot tolerate human-rights organisations that are accepted in the free world.” Amnesty, he said, was the “first line of support” for the Extrajudicial Execution Victims’ Families Association Manipur (EEVFAM), a collective of those who have lost family members in extrajudicial executions in Manipur and who are seeking justice. “They supported the victims’ families when they were being harassed [allegedly by Indian security forces personnel] after the Central Bureau of Investigation took up the case,” he said. “This was very meaningful at a critical juncture when many people were scared of speaking out.”

We live in an era when it is increasingly difficult to tell journalism apart from cheerleading; where the only compelling reason to watch TV news is to know who the government’s next target might be.

After years of collecting incidents of alleged fake ‘encounters’ (a euphemism for extrajudicial killings), an effort that Irom Sharmila also participated in before she began her hunger strike in 2000, the impact of such collective work finally arrived in July 2017. The Supreme Court’s order to start a probe into the allegations of over 90 extrajudicial executions by Indian forces (police, paramilitary and the army) became a landmark moment in the history of human rights in India. The judgment brought into question the impunity granted under the Armed Forces Special Powers Act, 1958 (AFSPA), which has been used to shield ‘excesses’ by the armed forces, and which Amnesty and other groups had been vociferously calling to repeal.

As Amnesty shone a light on rights violations in the country, which an increasingly loud and sensationalist Indian media does not find newsworthy, the BJP government’s hounding of the group became more aggressive. In 2016, when a sedition case was filed against Amnesty India, which the court dismissed three years later, my colleagues and I feared that we might be arrested simply for doing our jobs – whether working in remote areas, schools in Bangalore, raising funds on the streets of Chennai, or calling Indians to support Amnesty’s work. After a raid at the organisation’s Bengaluru office by the Enforcement Directorate in 2018, the government agency that investigates financial crimes, my former colleagues knew its time was near.

We live in an era when it is increasingly difficult to tell journalism apart from cheerleading; where the only compelling reason to watch TV news is to know who the government’s next target might be. Even before Hindu nationalism became fashionable in media circles, it was their ‘neutral’ stance that prepared the grounds for today. It is worth remembering that when the government came for civil society in 2014, when non-profits like Greenpeace and Amnesty were maligned for allegedly hurting India’s GDP, India’s news channels were acting like government mouthpieces in their primetime ‘debates’.

In 2018, by the time I had already left the organisation, complaints of caste-based discrimination and harassment rocked Amnesty’s India office. The same year, two employees of Amnesty International, one in Paris and the other in London, died by suicide. The coincidence was alarming, as were the allegations made against senior leaders in the management.

External committees were set up to look into the complaints raised against Amnesty’s International Secretariat and India office, respectively. The committee looking at the International Secretariat found that many employees found the organisation’s working environment “toxic”, while the Syeda Hameed committee, set up to audit the work culture and processes of the India office, concluded that they had witnessed a “perceived sense of discrimination” in the Bengaluru office. “Discrimination by default”, the committee described, happened in the form of “insensitive comments” and decision-making processes stemming from a lack of awareness of one’s privilege. The committee did not investigate the individual merits of the complaints, which were dealt with internally and found to be “without any foundation”.

One former Amnesty colleague, who had mixed feelings about Amnesty’s closure, said that during such a polarised time, the battles of marginalised people are often doused at the sacrificial altar of ‘the larger struggle’. “I’m certainly against the ‘witch hunting’ being carried out by this government,” she said, asking not to be named due to fear of government reprisal. “But seeing the way senior leaders in Amnesty silenced the very people they were trying to save, I think it’s important for such savarna-led organisations to look inwards as well when talking about justice and equality.” When I was at Amnesty India, the organisation was striving to become more diverse in its workforce and actively enforced affirmative action in its recruitment process. But the problem, as I see it, is that they stopped at that.

Can human rights, or independent journalism, ever be a popular mandate like raising the country’s GDP or even, a Ram Mandir?

Meanwhile, Amnesty India has also sought to be ‘self-sufficient’ in their operations by raising funds within the country so that they could work on difficult issues without worries about financial sustainability. To counter their public portrayal as an organisation involved in contentious subjects only, Amnesty India has also worked on seemingly ‘morally settled’ issues, such as reporting sexual violence and imparting human-rights education in schools.

While some accuse Amnesty India of prioritising ‘pop’ issues and campaigns that are more likely to grab global attention, it is also worth asking if organisations, known for pointing out inconvenient truths, in both Western and developing countries, can remain financially sustainable and do their job of holding authorities accountable only through locally raised funds. Incidentally, it’s the same question that independent media has been trying to find a solution for in the last few years. It is worth noting that the financial feasibility of non-profits in the country have been further threatened by the arbitrary application of the Foreign Contribution (Regulation) Act to scrap their foreign-funding licences; nearly 7000 organisations have lost their FCRA licence over the last three years alone. It is this law that Amnesty India stands accused of allegedly violating. They do not have an FCRA license, but, according to them, had raised funds from around 100,000 contributors in India. The shutdown perfectly coincided with new amendments to the FCRA, which now prevent organisations receiving foreign grants from transferring the funds to their partner organisations, making it difficult to support grassroots collectives in the country.

Can human rights, or independent journalism, ever be a popular mandate like raising the country’s GDP or even, a Ram Mandir? Yadav told me that by keeping people in the dark, the government pretends to speak for the general public. “If the public is with this government, then why do they lathi charge us when we protest on the streets? Why is it that so many Adivasis are in jail?”

This, I believe, is for Indians to answer, not Amnesty India.

Makepeace Sitlhou is a Guwahati-based journalist covering India’s Northeast for national and international publications. She tweets at @makesyoucakes.

Southasiasphere episode 12: Updates and analysis from around the region.

Forgotten manuscripts in European archives may hold important keys to Northeast India’s past.

Tracing the vision of Colombo as a garden city.