BOOK EXTRACT: A writer in search of Bahadur Shah Zafar’s tomb in Burma. 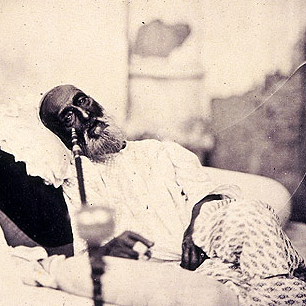 Bahadur Shah Zafar in 1858, just after his trial and before his departure for exile in Burma Photo : Wikimedia Commons

(An extract from Salil Tripathi’s upcoming book, a collection of travel essays called Detours: Song of the open road, to be published by Tranquebar Press on 30 December 2015.)

I had one more place to visit – the final resting place of Bahadur Shah Zafar, the last Mughal emperor of India, who died as a British prisoner in Rangoon in 1862. Finding his tomb was not going to be easy, but I was determined to succeed.

In India too, his name often appears as a footnote, an afterthought after the long line of illustrious predecessors who had spread their empire from Afghanistan to Bengal. By the time Bahadur Shah Zafar came to power, he was tired and old, with a dwindling treasury, no army, and his writ did not run much beyond the Red Fort. And yet, in the two decades he ruled, Delhi experienced what William Dalrymple, in The Last Mughal: The fall of a dynasty, called “the last great flickering of the Mughal lamp before it is extinguished.”

Finally an Indian resident in the city suggested I go to Ziwaka Road, north of downtown, on the way to the university and the airport. Ziwaka Road is quiet and unpretentious, and we drove some distance, without seeing any sign of a monument. Then I saw a few soldiers, returning from their drill, walking in a relaxed manner, smiling as they talked to one another. As our car slowed down near them, they became curious, perhaps even suspicious, and their smiles disappeared. As I asked one of them where I might find Sha-Za-Fa’s tomb, they shook their head, and I could see that I wasn’t doing a good job explaining what I was looking for. Then, out of exasperation, I said, ‘India King,’ and raised my arms above my head, as if showing a crown. Immediately one of the soldiers smiled, and pointed me to the spot where we had turned off the main road.

The building where Bahadur Shah Zafar’s remains are kept is in a quiet lane off the main road, away from the city, and far away from India. At the entrance I saw an arch made of metal, with golden paint, where it was written: Dargah of Bahadur Shah Zafar, Emperor of India (1837-1857).

I saw no sign of activity at the dargah. There was a poster of the emperor, looking dour and bearded, on one wall of a small cafe. I walked up the stairs to the main hall, which was empty, except for two men who sat in a corner, fanning themselves. I stepped inside, and saw three graves, with sheets covering them. On one side, four men wearing caps sat across one another, continuously reciting prayers. They ignored me as I walked around them and took their pictures.

On the walls there were framed prints of engraved images of monuments from India. The walls had fading portraits of Bahadur Shah and his wife Zeenat Mahal. There was one frame with the last known photograph of Zafar, a lonely, tired man, lying on bed, waiting for death. The sense of desolation was overwhelming.

The guard pointed to the stairs outside the building, which led me to Bahadur Shah Zafar’s actual burial place. The single large tomb there had a green sheet on it, with a bright yellow border. Fresh flowers were laid on the sheet. I saw an elderly couple, swaying gently while seated, their eyes shut, their open palms pointing skywards in a sign of submission, as they too recited prayers. The woman had placed a handkerchief on her head.

Again, the couple ignored me while I walked around, taking pictures. But as I turned to leave, the man rose after his prayers and asked me: ‘India?’ When I nodded, he smiled and told me to wait. He opened his lunch box, and gave me a piece of home-made banana cake.

The place had neither pomp nor glory. Humayun’s tomb dominates the landscape in Delhi. While Akbar’s capital Fatehpur Sikri was rendered uninhabitable, it survives, recalling the monumental folly of trying to transfer a city to a new location. Aurangzeb’s tomb looks like a poor imitation of the Taj Mahal, which Shah Jahan built for his beloved wife, Mumtaz Mahal. Bahadur Shah was a modest man, and his tomb is similarly modest. In one of his poems he is eerily prescient about his insignificance:

(I am not the light of anyone’s eye, nor am I comfort for any heart
I am of no use to anyone, I am that handful of dust)

A handful of dust – Evelyn Waugh would write a novel with that title many years later, drawn from T S Eliot’s The Waste Land. Eliot drew allusions from many cultures and languages, and in The Waste Land he wrote:

What are the roots that clutch, what branches grow
Out of this stony rubbish? Son of man,
You cannot say, or guess, for you know only
A heap of broken images, where the sun beats,
And the dead tree gives no shelter, the cricket no relief,
And the dry stone no sound of water. Only
There is shadow under this red rock,
(Come in under the shadow of this red rock),
And I will show you something different from either
Your shadow at morning striding behind you
Or your shadow at evening rising to meet you;
I will show you fear in a handful of dust.

A handful of dust: what remains; what is feared; what will be forgotten; what foretells.

Bahadur Shah Zafar was born when the East India Company had coastal presence in India; by the time he died, the Company ruled vast parts of India, and his empire had shrunk. But his name resonated and when the sepoys of the East India Company revolted in 1857, they came to Delhi, and asked Bahadur Shah to take over their leadership. The king who couldn’t control his wives, concubines, or sons, who had accepted with dignity British insults, now accepted with humility the symbolic honour the rebels accorded him. But the Company troops regrouped, counter-attacked, and won. They stripped him of his power, killed his adult sons, tried him, and exiled him to Rangoon. He knew the inevitability of how it would all end. One of his poems reads:

(How ill-fated is Zafar! For his own burial
He couldn’t get even two yards of earth in the land that he loved.)

The British, who ruled Burma too, denied him access to pen, ink, or paper, which was particularly cruel, as he was a mystical poet, a contemporary of Mirza Ghalib. When he died in 1862, his last rites were performed in haste, to prevent another revolt. The British officials who had supervised his burial had noted triumphantly: ‘A bamboo fence surrounds the grave, and by the time the fence is worn out, the grass will again have properly covered the spot, and no vestige will remain to distinguish where the last of the Great Mughals rests.’ Dalrymple noted that even the turf on the grave was replaced carefully so that within a month or two no mark remained to indicate the precise burial spot. The local Muslim community remembered him as a saint and built a shrine where they thought he was buried.

But you can’t bury history. In 1991, workers repairing a drain behind a shrine found the original brick-lined grave. Over the years, support from private trusts and the Indian Government have maintained the shrine. Dalrymple told me: ‘At the dargah he is portrayed as a king and a Sufi saint, and that’s perfectly appropriate; he’d be pleased.’

There is an old Gujarati poem about the fall of mighty empires. I couldn’t recall it exactly, so I got in touch with Ramesh Joshi, who taught me Gujarati literature at school. He remembered it immediately. Behram Malbari’s poem read:

(Great kings must walk to the beat of the time
I saw Shah Alam’s relatives begging on the streets.)

Shah Alam was Bahadur Shah’s ancestor. Bahadur Shah wanted to be buried near his ancestors, but that did not happen. The emperor had lost his throne, but the poet was at peace. Outside the shrine, across the road, there is a lake surrounded by trees. Young lovers sat beneath its shade. And lotuses bloomed.

~ Salil Tripathi is the author of The Colonel Who Would Not Repent: The Bangladesh War and its Unquiet Legacy. He is Contributing Editor at Mint and the Caravan in India. In May this year, he received the Red Ink Award for Human Rights Journalism from the Mumbai Press Club. He’s the chair of the writers-in-prison committee of PEN International.

Salil Tripathi writes for Mint and the Caravan, besides other publications. He chairs PEN International’s writers in prison committee. Born in Mumbai, he is the author of three works of non-fiction and lives in New York.