Skip to content
Culture > The town as musical score

The town as musical score

Ritual music has historically played a crucial role in giving urban space a transcendental meaning. This link is on the verge of being broken. 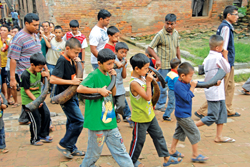 The Newar people of Bhaktapur, one of the three kingdoms of the Kathmandu Valley, have a unique musical culture that saw its heyday during the reign of the Malla kings, between the 13th and 18th centuries. Here, music-making is governed by lifecycle rituals, agricultural cycles, lunar phases and by the social hierarchy. According to a survey from the early 1970s, the town’s 50,000 inhabitants divided themselves into 82 castes, and many of these play specific musical roles during town rituals. Comprising more than 70 percent of the population, the farmers of Bhaktapur are especially active as musicians and dancers. This writer’s survey of Bhaktapur in 1984 counted more than 200 active music and dance groups. Today, this picture has dramatically changed.

All musical activities are part of the cult of Nasahdyah, the lord of music and dance, who receives blood sacrifice and musical offerings during musicians’ apprenticeship. The destructive aspect of the music god is called haimadyah; musical mistakes are ascribed to him. Musical invocations addressed to both gods are called dyahlhaygu (‘calling the god’), and serve as a direct link between the human world and the realm of the gods. Newars perceive their towns as permeated and protected by divine influences. During processions, the playing of musical invocations actualises divine energies residing in countless temples and shrines. Specific stones at street crossings, divine flight lanes demarcated by holes in brick walls, holy trees, rivers and religious monuments along the way induce musicians to play specific drumming patterns. The entire townscape is charged with meaning, becoming a musical score that tells musicians when and where to play what. The playing of such invocations can be compared with the dialling of a complex telephone number: If you dial/play correctly, a connection with the source of inspiration is established.

Urban space throughout Southasia is depicted, in an idealised form, as a mandala by traditional painters. In the case of Bhaktapur, this is diamond-shaped, with the main gods and goddesses occupying several areas. The area inside the boundaries of the mandala is protected by gods sanctifying the living space of humans against the chaos outside the town limits. There, evil spirits lurk and potential danger awaits the traveller. Whenever musicians play processional music inside the town, addressing the gods on the way with dyahlhaygu invocations, the divine order is actualised. The music makes sense in its relation to the locality and to the community.

Quiet Gunla?
Bhaktapur lies in a contact zone of Hinduism and Buddhism, both of which are heavily influenced by Tantric practices. During the processional month of alms giving and receiving (Gunla), Buddhist groups of all Newar settlements display significant activity, in order to accumulate positive karma for their afterlife. In Bhaktapur, two genres of Buddhist processional music can be distinguished: that of the Sakya artisans and that of the Saymi oilpressers. Despite both being Buddhist, these groups occupy different ranks in the social hierarchy. The Sakya intermarry with Bajracharya ritual specialists, and are considered above Newar farmers; Saymi oilpressers, on the other hand, are seen as below farmers. They also differ in their use of musical instruments, repertoire and daily processional routes that establish their respective mandala in the course of the month of Gunla.

The oilpressers create their mandala centre in a house supplied by a group member for the duration of the month. Under the supervision of a priest, two rooms are purified. The smaller room contains black clay collected from a certain site during a particular lunar phase, as well as holy water collected from four sacred sites outside Bhaktapur. This water is kept in five large pots arranged in four cardinal directions, standing on a mandala prepared with rice flour. The water pots represent four Buddhist shrines of special importance. The fifth pot stands in the centre of the mandala.

This room is shut to outsiders. Only the officiating priest and his assistants are permitted access to take water and clay to the main room. Here, under the priest’s directions, Saymi women gather every morning to prepare altogether 125,000 small clay caityas (miniature votive stupas), each containing a rice grain. At the end of the month, these are submerged at the confluence of the Bira and Bhadra tributaries of the Hanumante River south of Bhaktapur, at a site called Hanuman Ghat. Until then, the hill of caityas keeps growing in a special niche in the main room, where the daily processions of the Saymi men ends with a triumphant fanfare.

The Saymi processions establish the various layers of their specific mandala, starting with a relatively short route circling Buddhist monuments near their homes and ritual centre. The next outer layer of the mandala includes visits to the shrines of the protecting Tantric mother goddesses at the periphery of Bhaktapur. On special days, the Saymi travel to monuments elsewhere within the Kathmandu Valley, even reaching destinations east of the valley. As a result of these month-long circumambulations and playing of musical offerings, the musicians create a monumental mandala encompassing a vast ritual landscape.

The Newar Saymi community calls its processional music ngakha dhalang, literally ‘worship with horns’. Small boys play buffalo horns (ghulu) producing a lowing sound, while taller boys and men play shrill-sounding goat horns (cati and tititala). The exchange between these instruments results in the playing of the Buddhist mantra, ‘Arya tara tara buddha dharma sangha’. Others play nine kinds of drums, pairs of cymbals and copper trumpets. The ensemble also requires participation of low-caste members of the Jugi community, who play the oboe-like shawm (Gujarati mvaling) and are paid for their services. Younger males of this caste typically choose other professions or instruments, however, as shawm-playing identifies them as members of this low caste, inviting bias and discrimination.

The Jugi had the bad luck of arriving late. Reaching Bhaktapur as migrants from western India during the late 17th century, they were assigned their role and low status by the Malla rulers. As a result, the Jugi have endured a history of being treated as underdogs – or, in terms of music, as underpaid (often unpaid) temple musicians and accompanists. In addition to shawm-playing, they were forced to serve the higher castes during death rituals as a kind of human sponge, absorbing the evil influences from the dead. Little wonder, then, that the Jugi musicians are today something of an endangered species. Yet without their participation, many genres of Newar music cannot be performed, and will be lost.

During Gunla of 2010, only one Saymi group, with approximately 135 males and one little girl, participated in the daily processions. This is a steep decline from the 1980s, when three Saymi groups carried out the annual processions. Furthermore, the one group of 2010 followed five years of silence, owing to financial constraints. In fact, they say that last year’s procession could well have been their final effort. Thus, after more than 600 years of continuous practice, this tradition now looks to be nearing its end.

Lost bhakti
Bhaktapur entered the ‘modern era’ somewhat later than the other two towns of the Valley, Kathmandu and Lalitpur (Patan). The false image of ‘traditional’ Bhaktapur with its ‘flourishing music and dance traditions’ continues to be promoted for the sake of tourism. But the dire situation of processional Saymi music is symptomatic of the rapidly changing culture and disappearance of traditional music within the Kathmandu Valley generally. Most Newar music and dance groups lost their financial basis in 1963, when the Nepali state under King Mahendra confiscated their opulent land endowments and, in exchange, created the guthi samstan government offices in charge of town rituals. Earlier, the Malla kings and wealthy Newar citizens had donated this so-called guthi land on a monumental scale, to ensure continued practice of musical and ritual activities.

Other factors contributing to this decline are the usual evils of Southasian cities: unchecked population growth (half a million people now live in greater Bhaktapur), and the absence of sensible town planning. The ancient cultural landscape has been transformed into vast areas of slums without urban infrastructure, with over a hundred brick kilns today surrounding the town and polluting the air. Every small lane has become a racecourse for motorbikes, and it has become a common experience during festivals to see drunken youths on motorbikes blasting their horns while trying to force their way through ritual processions. In such a situation, it is very difficult to engage in any kind of musical procession at all.

In comparison to the old city centre, the vast suburbs of Bhaktapur strike the observer as brutally ugly, having no public space nor any ritual or communal infrastructure. People living here are cut off from the old town, including its music and religious meaning. In fact, many of these people came from elsewhere, having different cultural roots. They observe the ancient Newar town rituals as only mildly interested outsiders.

What is being lost goes beyond mere aesthetic. Guy Beck, a religion and music scholar in the US, has commented on the ideology of devotional group singing. ‘If music is dedicated in the spirit of bhakti, or love of God, the musician or devotee is said to gain the association of God. The emotional experience of both singers and listeners may vary according to the melody and the lyrics but certainly brings about a sense of communal harmony.’ If we assume that participating in religious group singing thus causes a sense of harmony in the community, it is disturbing to note that out of the roughly 120 religious song groups of Bhaktapur of the 1980s, only a handful are still performing regularly. Instead, people watch television in the seclusion of their homes.

Earlier, wealthy Newars documented their status by supporting a music group or donating the construction of a phalicha, a porch for public use. Today, status is demonstrated by riding a motorbike with the largest fuel tank and the loudest horn, to assert dominance of the street. A public spirit that expresses a common identity and a will to co-operate for common development seems to have been lost somehow in contemporary Nepal. And if this does not exist, the call for state authority is futile.

This new column, Tapestry, will offer stories that arise in the course of the ongoing work being done by Himal’s two sister organisations, Film Southasia (FSA) and the Hri Institute for Southasian Research.

–-Gert-Matthias Wegner teaches ethnomusicology at the Free University Berlin and at Kathmandu University. He has been a resident of Bhaktapur since 1983.