Skip to content
Environment > The waiting game in Kodagu

The waiting game in Kodagu

On the August 2018 floods that devastated the coffee country in Karnataka. 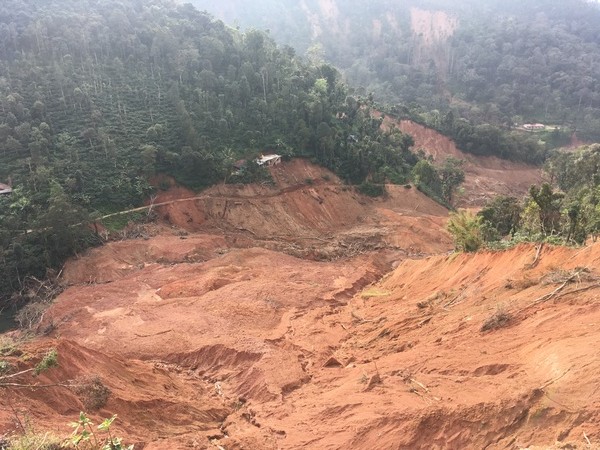 In mid-August 2018, people in far-flung villages of Kodagu – a district of 554,000 in Karnataka – reported hearing a sound they described as the explosion of a bomb or a cloud burst, perhaps the rumble of an earthquake – like earth’s anger, something bursting at its seams. None of these had ever occurred in the district before; all people had for the analogies were things they had read or seen in news from elsewhere. The consensus, however, was that it was a sound that they would never be able to properly describe. What happened in those hours between 15 and 18 August, would wipe entire villages off the map, give birth to new rivers, change courses of old rivers, obliterate land and hearths, and mark lives forever.

Around the time that national and global attention was turning towards the unprecedented devastation caused by floods in Kerala in southern India, across the border in neighbouring Kodagu, traditionally known as coffee country, it started raining very heavily. Situated in the eastern slopes of the Western Ghats – a mountain range that is a UNESCO World Heritage Site and one of the most biodiverse spots in the world – Kodagu sees heavy rains during the monsoon. But this year, after drought-like conditions for three preceding years, the rains lashed and left behind a frightening trail of destruction the likes of which no one in the district had heard of or seen in living memory. The loud boom that people heard was the sound of mountains caving in, of landslips along stretches up to seven kilometres long that buried entire villages under earth, and of rivers that gushed out from below the surface of what once used to be flat coffee plantations, sweeping away people, animals, houses and futures.

The inventory of ruin soon began to grow long. Mountains were slipping down and their debris was covering paddy fields. Sinkholes in connecting roads made nearly every town and village an island onto itself. Villages like Makkanduru, Thantipala, Kadamakallu and others, which were rarely heard of even within Kodagu, became more and more familiar on people’s tongues even as they were being wiped out of existence. The highway to Mangaluru – an important road for not just people movement, but also for bringing fuel and vegetables into the district – caved in for several kilometres, and there were rivers flowing over what used to be road. The thick mist that covers these northern parts made it impossible for rescue operations to always succeed, and often people ended up braving the fragile earth and walking tens of kilometers to reach relief camps set up in larger towns.

While the stocktaking of the overall loss continues, according to an estimate by the state government, the quantifiable damages were as follows: at least 20 dead, many still missing or presumed dead, around 2000 km of damaged roads, 1200 destroyed homes, 240 collapsed bridges, INR 3435 crores (USD 465 million) in losses, and 9000 hectares of ruined crops. Some have lost entire estates and homes, and with it, generations worth of personal history. Given the loss of top soil in many areas due to landslides, it might take several years – as many as 30, according to the former chairperson of the Coorg Planters’ Association – before these areas can be fertile enough for future cultivation.

According to a preliminary post-disaster report released by the Geological Survey of India (GSI) in mid-September, while heavy rains in August were an important cause, human activities that modified the slope of the area aggravated the destruction. In the course of about a week, the report notes, there were 105 major and minor landslips which occurred along natural fault lines and in landslip-susceptible areas. The landslips blocked streams and rivulets in several places, leading to flash floods and further landslips.

Since the topography of Kodagu is sensitive, the report observes, any changes in land use or land-cover causes landslides or ‘slope failures’ – the downslope movement of debris and soil due to weakened earth underneath. It adds that infrastructural development that modify slopes disturb natural equilibrium of the land. During heavy rains, slope forming material – rock, unconsolidated sediment, bedrock – gets saturated by the water, resulting in increased pressure of groundwater and decreased cohesion among the material. This effectively acts as a trigger for slope failures.

Tarun Cariappa – secretary of Coorg Wildlife Society (CWS), which works on wildlife and environmental issues in the district – speculated that there were multiple reasons leading to a disaster of this scale. “There was a large volume of rainfall within a short time. There is large-scale mono-cultivation of silver oaks [for sale as timber], trees that are far away from native species. Along the Madikeri-Madapura route [the belt that bore the brunt of damage] there has been a lot of construction. Whether it was done in sync with what is sustainable is anybody’s guess. This region has slopes of at least 50 percent incline. These were cut into to build houses and roads, and they become weak and won’t hold,” he said. The toe cutting of slopes to make roads is something the GSI report lists as well among the causes for the landslides.

The landslides also sunk into the earth several hectares of paddy fields. According to Cariappa, a lot of rainwater went into the sinkholes that opened up roads and joined the streams that flow under the surface, increasing the flow and pressure. “Water finds a weak point to come out,” he said, referring to new streams that had begun to flow on the roads and to rivers and streams changing course.

Kodagu has always been an agricultural district. Together with the neighbouring Hassan and Chikmagalur districts, Kodagu produces most of Karnataka’s coffee, which amounts to 70 percent of coffee production in the country. But after liberalisation of the Indian economy, Kodagu has found it hard to compete in the global market.  A fall in crop prices starting in the late 1990s along with the lack of support prices from the government have made it harder for farmers to sustain coffee cultivation every passing year. This has been compounded by increased migration to nearest cities like Bengaluru and Mysuru, changing weather patterns and crop diseases.

Around the mid-2000s, Kodagu began to brand itself as a tourist destination – cashing in on its sobriquet of being the Scotland of India – focussing on the idea of homestays. When agriculture began to lose the commercial appeal it had, the charm of hosting tourists in the house they lived in and making money off it began to slowly gain traction. The tourism industry has grown at a breakneck speed over the last decade and now keeps the town centres busy even in the rain – monsoon tourism being a holiday package in itself.

However, much of this growth has been unregulated, despite the periodic efforts made by the Department of Tourism to regulate the homestay industry. The proposed Karnataka Tourism Policy 2015-2020 mandated the grading of homestays, but soon removed the mandatory clause, and the sector remains mostly unorganised. Accurate and recent statistics are unavailable, given the high number of homestays that operate under the radar. However, in 2014, a Karnataka tourism department official estimated that the number of visitors to Kodagu could cross 3.5 million that year.

Many home owners prefer to run homestays than rent it out, because the incomes are higher in the tourism industry. And the more options to stay at, the higher the number of tourists. As a result, there has been a mad scramble to capitalise on this trend, resulting in a boom in the construction sector. But the environmental cost of this economic boom is beginning to be clear. Running these houses as homestays for tourists, rather than renting it to long-term residents, puts more pressure on the land and its resources than normal. According to the GSI report, infrastructural development that involved the modification of slopes – construction of new roads and widening of existing ones, building houses, hotels and homestays – increased the vulnerability of Kodagu’s mountains to the rain and made the landslides and floods that much more devastating.

The damage is still being inventoried and government officials are starting to collect applications seeking compensation for various damages. The most important roads are being repaired first. In some places, however, the more the slush and earth is being cleared, the more the soil is loosening up, leading to further landslips. Water can be heard gurgling beneath the surface of what used to be homes and plantations, as if a new river was waiting to burst through. The majority of people in relief camps have returned, or tried to return home to contemplate next steps. Experts have suggested mapping of landslide-hazard zones, and a land survey will be needed to fix boundaries where landslips and change in river course have altered geographies and property lines. This is expected to be a time consuming and laborious process.

But the disaster was not entirely unforeseeable. Ecologists have been warning of such floods in Kodagu and Kerala for years. In a 2011 report, the Western Ghats Ecology Expert Panel – more commonly known as the Madhav Gadgil Committee, named after the ecologist who chaired it – noted that unsustainable focus on development was affecting the Western Ghats and urged state governments, especially Karnataka and Kerala, to limit activities like quarrying, building dams and unchecked construction near protected and ecologically-sensitive areas. The K Kasturirangan Committee Report of 2013 sought to take a more limited approach, bringing only 37 percent of the Western Ghats under the Ecologically Sensitive Area zones, down from 64 percent suggested by the Gadgil report.

Kodagu is among the regions that both the reports referred to and deemed vulnerable. Both reports, however, were rejected by the two state governments. Notably, the Kasturirangan report was rejected by Karnataka on 22 August 2018, just as the relief operations in Kodagu were ongoing in full swing and the extent of damage was beginning to come to light.

Considering the high rainfall in the area, the September GSI report ominously notes that “recurrence of such events is not ruled out.” They add, “Vertical cut slopes should be avoided in future as it unstabilises the slope. Due care should be given to the cut slopes made for read construction and plantations.” Armed with the understanding of hindsight, it is clear that both the areas of highest damage and the pattern of that destruction was something experts had long been speaking about. The bigger question is whether there will be any lessons learnt, or whether this will be another news cycle to move on from.

Deepa Bhasthi is a writer based in Madikeri, Kodagu. Her essays, journalism and other writings have been published widely in ArtReview, Literary Hub, The Guardian, Hyperallergic, MOLD, Atlas Obscura and elsewhere. The archive of her works are available at https://deepabhasthi.wordpress.com/