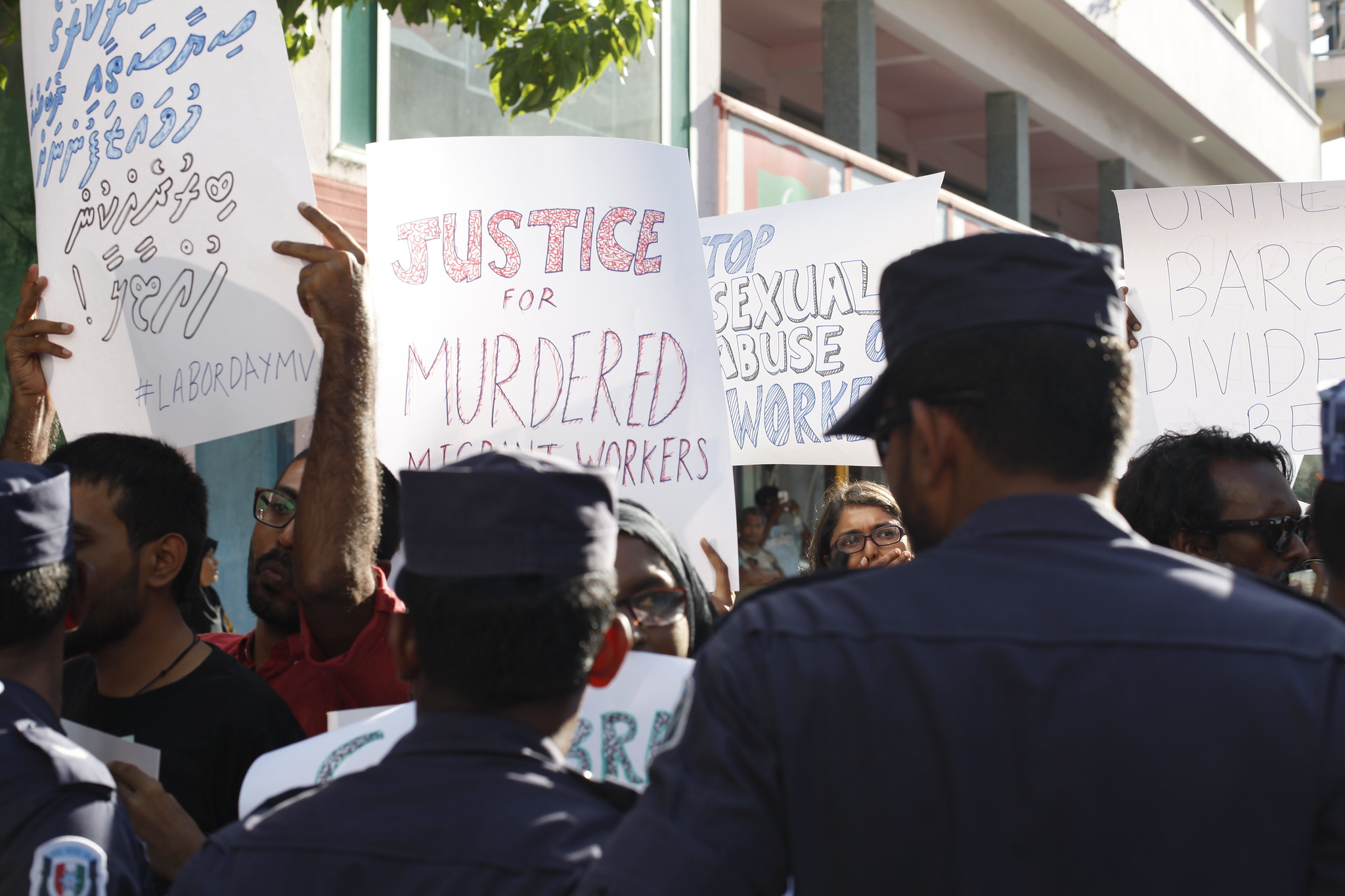 In a surprise move on 17 December 2020, the Maldivian government ratified the Transitional Justice Act and instituted the Office of the Ombudsman for Transitional Justice (OOTJ). This is a historic step by the government to initiate long-overdue redress mechanisms for survivors of past abuses. Achieving this uphill task in the current political climate – not to mention as the global COVID-19 pandemic rages on – is strenuous even with a supermajority in Parliament. This law is an attempt at guaranteeing legal certainty to the cause of serving justice, in the form of reparations and closure for survivors who have been systematically wronged by state officials and institutions.

However, given the Maldives’ political fluctuations, local and international observers must closely monitor the Act’s progress and assist the government in enforcing this revised legal framework, even if it does meet basic international standards. The recent assassination attempt against the country’s speaker and former president, Mohamed Nasheed, proves the volatile nature of local politics. The military and police backed coup against him in 2012 and the assassination attempt on former president Abdulla Yameen in 2015 are other examples that speak to a culture of impunity that needs to be addressed. Yet the Act is meaningless if its enforcement is not made viable through institutional security and funding, or if the perception of its impartiality is compromised. If it does not directly benefit survivors and victim communities, this is merely an exercise in hoodwinking the international community on the part of the Maldivian government.

Within a month of passing the Transitional Justice Act, President Ibrahim Mohamed Solih appointed three ombudspersons, to establish the Office of the Ombudsman for Transitional Justice (OOTJ). The fundamental objective of the newly created domestic reparations programme is to redress state-led atrocities from 1 January 1953 to 17 November 2018, and to hold current and former public officials accountable for severe, systematic, and institutional human rights violations. According to the legislation, the transitional justice ombudspersons are mandated to conduct criminal investigations and subsequently initiate prosecutions.

This is a historic step by the government to initiate long-overdue redress mechanisms for survivors of past abuses.

The OOTJ is responsible for excavating the truth on past atrocities, assessing their causes and extent, and making perpetrators of abuses answerable for their actions. This includes the legal authority to re-open investigations into atrocities previously investigated by various state agencies, if new evidence or a point of law is uncovered that could impact the outcome of the case in question. If the OOTJ cannot resolve the case, they can also engage the Prosecutor General or Attorney General to conduct criminal and civil proceedings, enabling survivors and victims to receive legal and non-legal remedies. Their responsibilities include reforming state institutions to ensure non-recurrence of atrocities and making further recommendations along those lines to the president.

The Transitional Justice Act affords the ombudspersons the assistance of state institutions, including law enforcement, sending summons for investigation, and engaging foreign experts. It is paramount for the ombudspersons to inform the public of their responsibilities and objectives, as mandated by legislation, and to process cases in a transparent and timely manner.

The Act is meaningless if its enforcement is not made viable through institutional security and funding, or if the perception of its impartiality is compromised.

Witness protection is crucial to any solid attempt at serving justice in contentious and high-risk cases. The law ensures the protection of witnesses and survivors who engage with the transitional justice mechanism and attempts to prevent further victimisation through the reparations process. The Act shields survivors from re-victimisation by requiring the adoption of measures that ensure their dignity and security while protecting their identity and personal information.

As per the Act, domestic reparation measures consist of compensation for survivors and victims who directly endured persecution or violence, including economic loss, physical injuries, mental illness, or deaths. The domestic reparations programme is to be implemented through prosecution initiatives against those implicated in atrocities, providing monetary compensation, rehabilitation, restitution, and resolution. The courts would compensate survivors for the harm suffered because of the state’s persecutory actions. The law mentions that the office has a budget marked by the People’s Majlis and has the prerogative to raise funds from domestic and international organisations.

When it comes to implementation, the elephant in the room remains: why would survivors feel comfortable seeking reparations when some of the perpetrators of atrocities hold high-level government positions?

The Transitional Justice Act also includes provisions that call for initiatives to help survivors reintegrate into society, assuring that reparations are not limited to monetary compensation. According to the law, these efforts must include rehabilitation, peacebuilding and conflict resolution programmes applicable in the Maldivian context. Survivors who were subject to violence and persecution indirectly are eligible to apply for restitution measures and educational opportunities, in addition to housing, healthcare and mental health services.

The elephant in the room

Among the important features of the Transitional Justice Act is that institutions and public officials implicated in atrocities can be subject to prosecution seeking damages. Other redress mechanisms include halting human-rights violations, making perpetrators answerable and demanding public apologies from them. The Act gives the Prosecutor General and the Attorney General 21 days to initiate court proceedings once the office submits cases requesting judicial action for reparations.

When it comes to implementation, the elephant in the room remains: why would survivors feel comfortable seeking reparations when some of the perpetrators of atrocities hold high-level government positions? The current political configuration in power finds itself in a paradoxical situation where the Maldivian government must redress past abuses while some abusers continue to retain official status. At the very least, the coalition government must improve the perception of justice through public apologies and other acts of atonement from alleged perpetrators who sit in government positions.

There remains a significant disconnect between the government initiatives, and those who are meant to be served by the Act.

The current government coalition consists of politicians implicated in the police and military-backed coup against former president Mohamed Nasheed in February 2012. How will prosecution initiatives against officeholders materialise without suspensions or resignations? The ombudspersons must unambiguously regulate procedures for investigating and prosecuting officeholders. A cursory look at media reports or historical accounts shows that the current foreign minister, home minister and youth minister were involved – to varying degrees – in events linked to the 2012 coup and the controversial ‘transfer of power’ to Mohamed Waheed Hassan; further investigations may implicate other political and security service actors in earlier atrocities, including the 2003 Maafushi prison shooting and the violent crackdown on the peaceful Black Friday protests in 2004.

The Act declares any obstruction to the ombudspersons’ work a prosecutable offence. However, it doesn’t equip the ombudspersons with tools to fend off obstacles from state institutions or actors. In the experience of other domestic transitional justice mechanisms, the most significant impediments to its work have come from state sources. For instance, what if prosecutors or police obstruct survivors from receiving reparations? What if politicians in the current government implicated in atrocities refuse to step aside during the investigations?

The Maldivian government must demonstrate its sincerity by recognising past atrocities and reassuring survivors that the reparations programme would be reliable and inclusive.

Another urgent question is how the government intends to provide legal remedies while judicial reform is on hold or is still ongoing, even if there has been some progress. Recently, local civil-society organisations welcomed the new Maldives Police Act, ratified on 27 December 2020, stipulating that officers apart from the Police Commissioner must be vetted for “violations of human rights and democratic principles.” Although the Supreme Court has a reputable bench, the trial courts are yet to see reform to eliminate judicial corruption and policies that obstruct access to justice for ordinary Maldivians.

There is room for improvement when it comes to consultations and the involvement of community leaders and survivors. There remains a significant disconnect between the government initiatives, and those who are meant to be served by the Act. The OOTJ must, therefore, organise consultations openly and systematically to continually inform the truth and reconciliation process, spotlighting the survivors at each stage, particularly those from the sites of the atrocities amid the colonial-era secession crisis in the Maldives’ southern atolls between 1956 and 1963 – in Huvadhu, Addu and Fuvahmulah – ensuring full territorial reach and presence.

It is also essential to include those communities that have been uprooted and displaced, including Thinadhoo and Gan islanders. The People’s Majlis must amend the mechanism to cover persecuted individuals and their families who have been forced into exile after surviving torture and persecution at various political conflicts from the 1950s until 2018. Similarly, the Maldivian government should hold accountable any political actors in exile if implicated in perpetrating atrocities.

Through the OOTJ, the government must also clarify the atrocities identified as those applicable under the domestic reparations programme. It must strive to include all significant atrocities, where the gross human-rights violations were state-led, and fall within the currently extended temporal jurisdiction, beginning January 1953.

The proof of the Transitional Justice Act’s success ultimately lies in its implementation and reach.

States initiate truth and reconciliation exercises to benefit survivors who endured (often state-led) persecution and violence. In that regard, the Maldivian government must demonstrate its sincerity by recognising past atrocities and reassuring survivors that the reparations programme would be reliable and inclusive.

Judicial and legal actors reforming the country’s corrupt judiciary must factor in the importance of an independently functioning criminal justice system to attain transitional justice. The president must extend the OOTJ’s term to produce long-lasting peace and stability. President Solih must also strengthen the ombudspersons to remove elements in his government proven to have committed gross human-rights violations during the period specified in the Act.

It is still too early to tell if the Maldives can successfully implement the legislated reparations programme. Those monitoring the Maldives’ human-rights situation could measure the transitional justice mechanism’s success by assessing if and how the reparation programme reaches the survivors and victims’ families and communities. If some influential perpetrators remain above the fray, it could tremendously damage the perception survivors have over the Maldives’ transitional justice mechanism. The proof of the Transitional Justice Act’s success ultimately lies in its implementation and reach.

Mushfiq Mohamed is a Maldivian lawyer, writer, and human rights activist. He is a member of the Anti-Torture Litigators Network at the World Organisation Against Torture (OMCT) and a recipient of La Médaille du Barreau from the Paris Bar Association. Mohamed is a former public prosecutor and has an LLB (Hons) Law and MSc (Econ) in Postcolonial Politics from Aberystwyth University.