Everest multi-summiteer Ang Rita Sherpa would have been an international celebrity if he spoke English, had fair skin, and concentrated on selling himself rather than grazing his yaks. 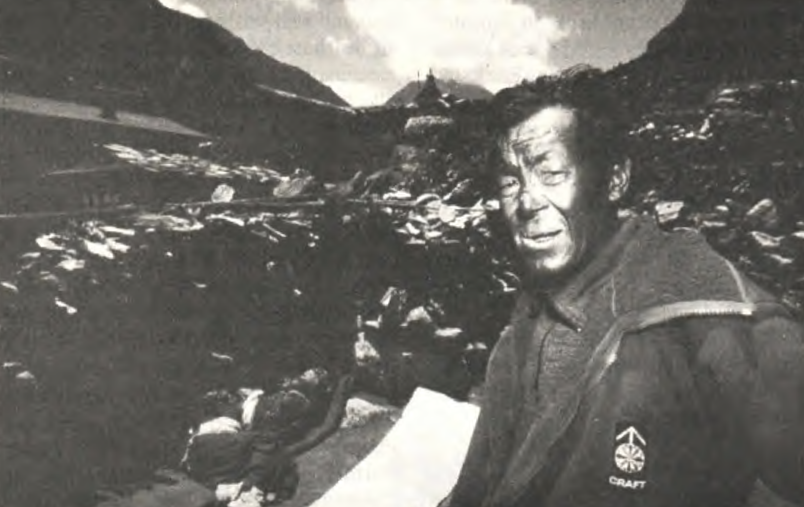 Photo: Ang Rita outside his Thame home,just back from his tenth time on Everest. September 1996 Himal Southasian

In Everest lore, the spring of 1996 will be remembered as the killer season. Eleven climbers died as fierce storms whipped oxygen-starved climbers on the world’s highest mountain. The disaster got unusually intense Western media attention, and “made it” to the cover of Time, Newsweek and Life.

But while the world press was busy printing personal accounts of anyone who was anywhere near Everest when the climbers died, it failed to note a mountaineering milestone that was achieved at about the same time. On 23 May, Ang Rita Sherpa made it to the summit of Mount Everest for the tenth time, going about it as routinely as he had his previous climbs.

Not that Ang Rita cares much for publicity. When news of his achievement slowly filtered out, the handful of journalists who landed in Kathmandu hoping for interviews found him most elusive —true to his appellation of “Snow Leopard”. Shuttling as he does between Kathmandu and his home village of Thame in the Sherpa-country of Khumbu, it takes considerable patience to track down Ang Rita. And even if he is finally located, having him sit down for a chat is another ordeal.

An Austrian radio journalist who was in Thame trying to meet Ang Rita for Himal South Asia faxed in an exasperated note: “He always agreed but never came to our appointments. Nobody has seen him for several days.” It turned out that the ageing climber was up in the high pastures grazing yaks.

That is just like Ang Rita. He spends most of his time in Thame, looking after his fields, bringing in fodder and firewood, taking care of his yaks. The ordinary Sherpa family man. But every climbing season the Snow Leopard emerges from his Khumbu lair to conquer yet another peak. More often than not, it is Everest.

Besides the ten times he has been atop Everest, Ang Rita has also scaled Cho Oyu (8201 m) and Dhaulagiri (8167 m) three times each and Khangchendzonga (8594 m) once. These are only the eightthousanders, and there are numerous other lesser peaks under his belt, all in the normal course of his work as a high altitude guide for expeditions. In all his summit successes, he has never made use of bottled oxygen.

It has been a long haul for 49-year-old Ang Rita, who began his career as a porter for a trekking company in Kathmandu at the age of 17. It took him 15 years to become a guide, which was when he started climbing mountains in earnest. But it was not until 1983, when he first summitted Everest, that he felt secure about his career. “Other peaks do not matter so much, but once you have climbed Everest, people come looking for you,” he says, a trace of pride creeping into his gruff tone of voice.

And so, over the years, there has been a never-ending queue of climbing teams that have sought his services. As far as Ang Rita is concerned, the Everest ascents were all part of the job. “I did not start climbing to set a record. It just happened.”

A mountaineer who learnt his skills on the job, Ang Rita does have detractors who point out he is more of a “plodder” than a “technical climber”. This might be true, but the ability to plod on snow in high altitude makes a significant part of the skill and stamina required to climb in the Himalaya. Those who cannot plod rarely make it up Everest.

Ang Rita himself does not claim to be a great climber. He is content to attribute his mountaineering success to the deep veneration he feels for the mountains. He explains, gesticulating to make up for his not-so-perfect Nepali: “Foreigners are contemptuous of the very mountain they hope to climb, they see them as no more than rock and snow. That is why so many of them die. As for me, I never set out from base camp without a prayer to the gods and I always wait for an auspicious moment. Until such a time comes, I refuse to budge even if the expedition leader tells me to.”

Not many know it, but barely three years ago Ang Rita was lying in a hospital bed in Kathmandu with a severely damaged gall bladder. His doctors believed that he was in the last stages, but he survived and went on to notch three more big climbs, including two more Everests.

Those who had seen him in those desperate moments in hospital wonder that he is still alive, let alone still climbing. This is because if Ang Rita is famous for his climbing exploits, he is equally well known among his family and friends as one who enjoys his glass. In the high mountain village that is his home, it is not uncommon to begin the day with a bowl of chang (the local spirit similar to beer). But in the urbane atmosphere of Kathmandu, his predilection for an early morning cup of cheer is frowned upon.

Ang Rita sees no reason to be apologetic. He says: “Foreigners never find my drinking a problem. They know when it is time to work, I work. Do you think I would be able to climb if I drank on the mountain? It is only Nepalis who turn up their noses and say ‘Why do you drink all the time?'”

Sound logic, but one that might have cost Ang Rita more than he may realise. After the climber’s seventh time on Everest’s summit, a Kathmandu-based entrepreneur who saw the possibility of marketing the Ang Rita name as a brand struck a deal with him. Correspondence was begun with corporate houses like Rolex, Dewar’s whisky and well-known climbing gear manufacturers, and responses were coming in. American TV talk show host David Letterman was interested in having Ang Rita on his programme and there was a book offer from a publisher in England. But everything fell through, because, claims the do-gooder entrepreneur, Ang Rita found it difficult to remain sober.

The only corporate endorsement Ang Rita seems to have made is for a private Nepali airline which bills itself in advertisements as “Ang’s Choice” (which is pretty silly considering that “Ang” is only the Sherpa equivalent of “Mister”). The airline has undertaken to provide Ang Rita free passage on all its routes for the rest of his life. This has enabled him to frequently hop on the Khumbu-Kathmandu helicopter shuttle—one reason why it has become so difficult to locate him.

Ang Rita complains that for all the name he has made for himself, he has not made money. He does not claim any extra benefits, monetary or otherwise, from the expeditions he joins. “If I were to ask special treatment, other Sherpas would not like it. Besides, we are all there on the mountain working together as a team,” he says. He makes NPR 60,000 or so for the three months’ hard work with an expedition during climbing season. This is minuscule compared to what organisers of expeditions make through him by “selling” expeditions using Ang Rita’s presence as attraction.

As a safeguard for his future, Ang Rita started his own trekking company in 1995 with four other partners. The company’s signboard reads “Ang Rita Trek & Expedition (P) Ltd” with the qualifier “Run by Ang Rita Sherpa 9 times Everest summiteer”. The “9” has not yet been changed to “10”, eliciting a quip from a New Delhi-based journalist: “They should do better by marking the number with chalk. That would be one way of anticipating Ang Rita’s future climbs!”

Business has not taken off, mainly because Ang Rita is handicapped by his illiteracy and unable to make use of his contacts among his army of climbing partners and well-wishers. The signboard does attract those eager to meet the redoubtable mountaineer, but he is hardly ever in the office. He is more at home strolling around Kathmandu’s tourist quarter of Thamel which he can without attracting any attention than at playing the celebrity.

That is not to say that Ang Rita’s feat has not been recognised in Nepal. He has been awarded both of Nepal’s highest civilian honours and the Nepal Mountaineering Association has him as field director (honorary) on a monthly stipend of NPR 7000. A grand procession carried him around Kathmandu town last year after his ninth ascent of Everest. The government also gave him a cash award of NPR 500,000, and this year after his tenth ascent of Everest (“Sagarmatha”) a life-long monthly pension of NPR 5000 was announced by the Finance Minister during his budget presentation in Parliament. That, for a change, had the perpetually fractious Nepali legislature united in appreciative desk-thumping.

Ang Rita, however, feels that the authorities have not done enough. He wants a house in Kathmandu, but does not have the money. When asked about the five hundred thousand rupees, he retorts: “That is not enough even for a square foot of land in Kathmandu. My friends tell me to go to the outskirts of the city. But am I a monk to live out there all by myself?”

The Snow Leopard’s financial worries should be receding now, if only because two of his sons have also started climbing. One has already scaled Everest and Cho Oyu, the other Shisha Pangma (8013 m) in Tibet. Ang Rita himself is not thinking retirement yet. To him, the question of whether he wants to climb Everest or not is academic. It all depends on whether he will be hired or not. “lf I get work I will go up, if not I will not,” is his straightforward answer. And neither is he worried about record-keeping. His fellow villager Apa Sherpa, with seven climbs of Everest, is not far behind but that does not trouble Ang Rita. It is just a job which you learn to do well.

This autumn, he has been asked by a French team to join them on Manaslu (8165m) in central Nepal while a Japanese group wants him to go climbing on Cho Oyu, up the valley from Thame. “I think I will go to Manaslu,” says Ang Rita, with that crooked smile of his.