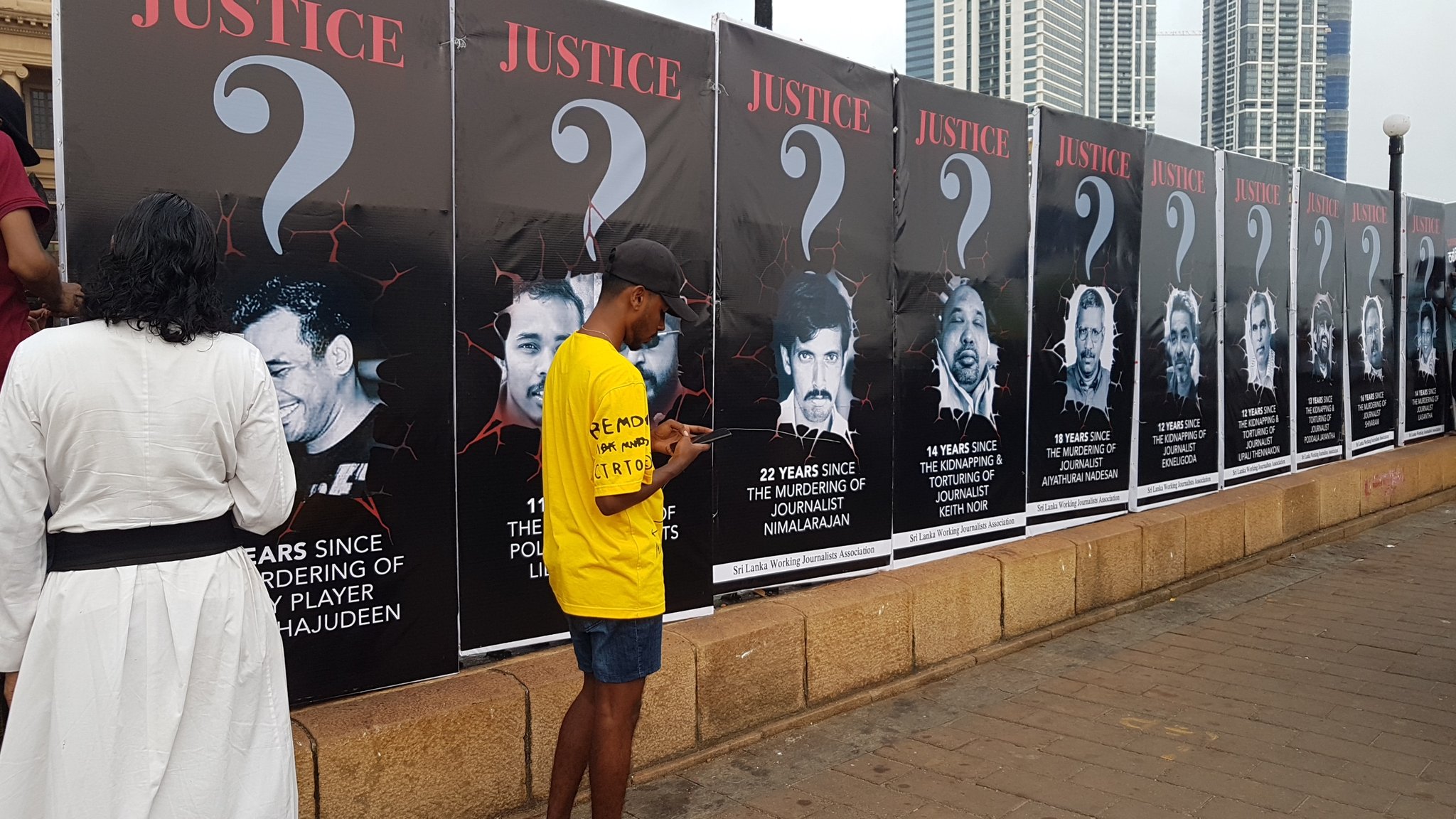 On 4 May 2022, a tweet posted by the Colombo-based reporter Chandani Kirinde sparked debate on the role of journalists in political movements. The tweet was in response to news that 12 people, including a journalist/blogger who had been participating in protests around Sri Lanka’s economic crisis near Parliament, had been detained. “If he’s a journalist, why is he protesting near the parliament instead of reporting on it?” she posted. In response, Kirinde received a flurry of criticism and personal insults, including (unfounded) accusations of being partial to the Rajapaksa government.

As it turned out, the protester in question was no longer a journalist, having left his previous workplace a month before. It’s also worth noting that Sri Lankan journalists had joined the protests on numerous occasions. On 20 April, journalists marched from Colombo Fort to the Presidential Secretariat, calling for justice for journalists who were killed or abducted. Two days earlier, journalists also joined the protests at Gotagogama, the protest site at Galle Face Green, calling for accountability for attacks on the media. But Kirinde’s tweet touched on a principle that most scribes strive to uphold – the idea of maintaining impartiality when reporting on news events. Chhetria Patrakar feels compelled to ask the question: what makes a journalist?

Every scribe worth their salt knows that the one thing to guard against is caring too much. State-sponsored thugs or police attacking peaceful protesters? Call it ‘tension’, or a ‘clash’, as if both sides are somehow equally culpable. If you’re in India or Pakistan, and wish to describe extrajudicial killings, use the word ‘encounter’ – like a meet-cute, except with bullets. In Bangladesh, it’s ‘crossfire’, even if one party is unarmed. A member of the ruling party exposed for corruption or implicated in a fatal road accident? Use the word ‘alleged’, then go on to mention identifiers – because what’s most important is to flirt with, yet avoid, a defamation suit. Don’t mention names under any circumstance.

This media critic is perhaps being a little churlish. Not every journalist minces their words (Kirinde herself has a solid body of work as a parliamentary reporter). And yet, the murkiness in mainstream media is about more than just a turn of phrase. In Sri Lanka, the business of media is intricately entwined with politics. A cursory glance at the Media Ownership Monitor, by Reporters Without Borders and Colombo-based think tank Verite Research, reveals that audience share in print, radio, television and online media are concentrated among a few outlets (and a few owners). Many of these owners have political affiliations.

Take Dilith Jayaweera, a media mogul who co-owns Derana TV, Liberty Publishers and is a managing director of Triad Advertising. The Media Ownership Monitor notes that Triad gained prominence after running Mahinda Rajapaksa’s advertising campaign in 2005, when he was running for presidency. When protests began to intensify, Derana’s Mahieash Johnney of ‘State of the Nation’, a prime-time programme likened the Galle Face Green protest site to a ‘beach party’ (Johnney later resigned after protesters began a campaign to boycott the channel by unsubscribing from Derana news alerts and social media). Many people turn to Sirasa TV or News First for critical coverage – both of which belong to the Capital Maharaja Organisation, owned by the Rajamahendran family. While on paper a privately owned media conglomerate, Capital Maharaja largely favoured Sajith Premadasa to lead the United National Party and later, the Samagi Jana Balawegaya over Ranil Wickremesinghe, particularly in the run up to the 2019 Presidential elections. Meanwhile, TNL Radio Network and TNL TV are owned by Shan Wickremesinghe, Ranil Wickremesinghe’s brother.

The day after the former Prime Minister Mahinda Rajapaksa hosted SLPP supporters at the official prime-ministerial residence Temple Trees and then watched as they unleashed violence on protesters who had been peacefully demonstrating for months, some newspapers did take a stand. Among the newspapers that blackened their front pages and explicitly noted ruling party involvement in violence were Ceylon Today, Mawbima and the Morning newspaper. (Unsurprisingly, state-run newspapers played down Rajapaksa’s role in the violence.) But it was interesting to note diversity in coverage in different language publications, even within one publishing house. The Morning’s sister paper, the Sinhala language Aruna, for instance, was more circumspect in its coverage, as media critics noted (both these papers are also owned by Dilith Jayaweera, and are distinct from Derana TV), suggesting that apart from personal politics, commercial interests can also play a role in editorial coverage.

Investigative journalist Namini Wijedasa of the Sunday Times recently alluded to this at a World Press Freedom Day event. “Journalism, when done right – without the freebies, the influence-peddling, the discounts, the complimentary hotel stays and restaurant meals, the festival hampers, the selfie and photo ops – is not a glamorous career,” she said. (The implication in that sentence being loud enough to be chanted at GotaGoGama).

The protesters know this. Some of the performing artists who participated in protests have explicitly alluded to mainstream media’s role in furthering the careers of politicians in sketches. Cartoonists too have drawn their own scathing critiques.

How not to cover a crisis

If local media has been politicised, international media hasn’t exactly distinguished itself in its coverage. CNN and Bloomberg both referenced ‘clashes’ (while forgetting to mention that the violence began after Mahinda Rajapaksa addressed a crowd of his supporters at Temple Trees and then watched on as they attacked the protesters at Galle Face Green with poles). At the same time, the New York Times cherry-picked photos to characterise the protests as violent and unruly. Many were quick to connect the economic crisis to events in Ukraine, or COVID-19, while glossing over economic mismanagement locally, revealing a lack of understanding about the situation on the ground.

This doesn’t negate the demand for solid investigative work being published by mainstream media, despite the constraints placed on them by owners, advertisers and low pay, as Wijedasa rightly noted. But sadly, such work is the exception, not the rule. Even when such writing does reach the public, it’s often subject to letters of demand, summons to the CID, or as in the past, outright violence. Some of the acts of protest in front of the Presidential Secretariat have included posters, memorials and even light projection mappings dedicated to journalists who were killed, assaulted or forcibly disappeared for their work. It is a powerful reminder that there is indeed a demand for journalistic work that is verified, substantiated, and that draws from multiple sources.

But equally, there should be space for the university student who picks up their phone to record the protest in which they are participating – and for journalists who raise placards about more than just media freedom.