Where next after multimedia?

A new collection of essays seeks to make sense of our new multimedia world, where we are both producers and consumers, newly free and newly constrained 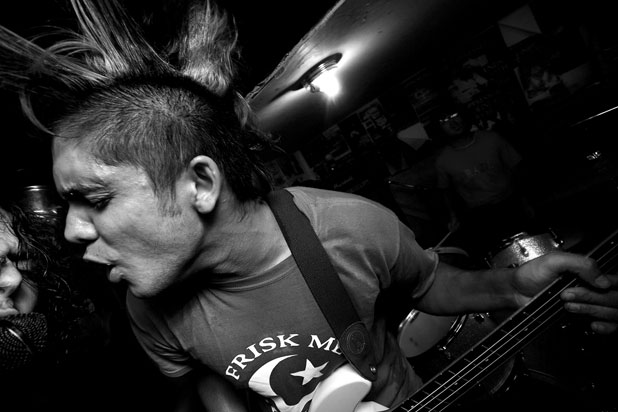 ‘Taqwacore’ punk band The Kominas renegotiate communal identity as part of a transnational, ‘intermedia’ movement of Islamic punk devotees. Their album Wild Nights in Guantanamo Bay is now a collector’s item, though instant classics like ‘Sharia Law in the U.S.A’ and ‘Rumi Was A Homo’ continue to circulate online. Flickr / Eye Steel Film.

We live in a supposedly boundless, hyperlinked world: New media and new technology have accelerated, revolutionised and radicalised communication across space and time. Today, our media environment is seamless, with multiple media functioning simultaneously and content being shared immediately across multiple platforms, giving fillip to the idea of ‘intermedia’. The way we now receive news of various kinds at the same moment – beyond the hitherto dominant print and the electronic media – on Facebook, Twitter, YouTube and numerous news websites, with a lot of give and take between the media, is a typical attribute of the ‘intermedia’ environment. Intermedia in South Asia: The fourth screen, edited by Rajinder Dudrah, Sangita Gopal, Amit S Rai and Anustup Basu, academics associated mainly with cinema studies in the UK and USA, delves into the emerging and somewhat fuzzy media scenario, looking at the “in-betweenness” of it all, connoting lack of any fixed or specific location.

Media ecology – the exploration and analysis of our informational and cultural environments, of human orientations, values and beliefs, constructed and controlled by media and communication technologies – is a key point of analyses in the book. The field has drawn the attention of scholars for a fairly long time, yet much of it remains uncharted. In its conceptual formation, media ecology began in the 1960s with sociologist Marshall McLuhan’s provocative, techno-determinist description of media as an extension of human organs. McLuhan, however, had the foresight to contend that each form of media finds its meaning and rationale for existence through its interplay with other media. But it was left to the cultural philosopher Walter J Ong and the media theorist Neil Postman, in the 1980s and 1990s, to show the way forward; they did away with crass media-and technology-centric analyses and infused a ‘human factor’ into the field, theorising it in terms of human perceptions and understandings. As Postman stated in an article titled ‘Humanism of Media Ecology’: “We put the word ‘media’ in the front of the word ‘ecology’ to suggest that we were not simply interested in media, but in the ways in which the interaction between media and human beings gives a culture its character and, one might say, helps a culture to maintain symbolic balance.” These intersections and interplays between various media and human values, action and behaviour lie at the foundation of the contributions in Intermedia in South Asia.

This seamless, digital multimedia media saturates society to the point that we can no longer understand the media as being separate from other institutions

The coming of the digital frame as the ‘fourth screen’ has led to a huge qualitative change, compelling media theorists to focus on coevolution of two kinds: human-media coevolution – how audiences coevolve with their respective media and how media coevolve with audiences; and intermedia coevolution, how two or more media coevolve together. Before the coming of the digital age, the overwhelming thrust of media analysis, albeit with some notable exceptions, was on exploring the ‘world of media’ from a supposedly external vantage point. Analysts used to focus on a specific form of media, such as radio, and its good and bad attributes, under the assumption that analog media operated in discrete time and space, and with stipulated functions. With the late-20th century variety of globalisation and the spectacular increase in the power and reach of new information technology, as text, audio and visual media converged, the analytical focus shifted to the nature and consequences of intersections and also to the new dual role of the people as both producers and consumers of messages.

However, the current focus on media ecology has brought with it the hegemonic logic of mediatisation theory, which argues that the demands of the prevalent media shape political discourses and processes, creating, in the words of the theorist Kent Asp, “a political system [that] to a high degree is influenced by and adjusted to the demands of the mass media in their coverage of politics.” In this view, the seamless, digital multimedia media saturates society to the point that we can no longer understand the media as being separate from other institutions. Everything around us is not just being mediated – packaged and presented to us via various forms of media – but mediatised as well. This is an inherently political process, changing the way we communicate and the way we understand the world as each of us includes and excludes certain perspectives and opinions from among the options the media presents to us. The book provokes the readers to reflect on the scenario depicted here, on the emerging routes of digital culture and intermedia experience.

Intermedia in South Asia was originally published as a special issue of the journal South Asian Culture, and presents eight short and insightful contributions. Unfortunately, the editors do not do justice to the ‘South Asia’ in the book’s title. The essays, with a couple of exceptions, remain either heavily India-centric or too theoretical to accommodate ‘concrete’ regional concerns even partly. There is definitely more to Southasia than India, and while there may be some regional commonalities vis-à-vis the emerging media ecology, any regional perspective would still need to address the many specificities of each country. As one contributor mentions, the concept of “transnational South Asian identity” is a contested one. Had these commonalities and specificities been addressed even in short segments, or if there had been any attempt at detailed comparison or at constructing the beginnings of a Southasian framework for intermedia criticism, the volume would have been much richer.

Those who approach media studies by means of cultural studies remain largely indifferent to the role of capital and labour. Those who use the political economy approach remain largely detached from cultural dimensions

The essays explore intermedia from unconventional but relevant vantage points: the theoretical placement of film festivals in new media ecology; the construction of Southasian identity among diasporic communities in Europe as represented in two Zee TV programmes; the overly dramatic, saturating, 24/7 telecast of the 2002 carnage in Gujarat; online (re)mediation of Hindu rituals, practices, symbols and images; the renegotiation of communal identity in virtual, online space through transnational Islamic punk rock; and much more. In their introductory note, the editors make it clear on their part that as scholars of Southasian popular culture they tend to focus on how people are “making meaning” of new media, and how in the process “new publics, new affects and new experiences of pleasure and value are created.” They also refer to “subaltern tinkering” of new media by way of pirating, hacking, jamming, peer-to-peer file-sharing and so forth. In this way, the book refrains from presenting the new media scenario as invincible, and acknowledges its “vulnerability”.

The book also situates these complex intermedia dynamics on the broader spectrum of state-market relations, in which the once rigid and overbearing (Nehruvian Indian) state has had little choice but to come to terms with the advent of neoliberalism and the incessant, instantaneous and intensive flow of information in the commercial media. The inevitable tensions arising from this process are evident in the essays. The editors, however, argue that “this is not a more complex media ecology than that which prior generations have experienced”, though no further explanation is provided. Paradoxically, while making such observations the editors reiterate the arguments of some overenthusiastic advocates of virtual culture, who prefer to play down the complexities, predicaments, tensions and conflicts associated with it in order to ‘prove’ how smooth the transition from older to new media is.

Two features distinguish the book: First, it maintains, through a complex and often abstract analytical route, that there can be no straightforward way, no universal norms for conceptualising intermedia and the emerging media ecology. These essays, with their focus on rough edges and twists and turns, act as an antidote to simplistic and monocultural orientations and understandings. Second, despite being heavily grounded in the literary and cultural theories that are the hallmark of film studies, the essays offer a number of clues about the nature of the new political economy of our times. There are repeated references to the depleted state and the changing nature of capital (virtual capital/digital capital/‘Hindu capital’), to the fluidity, flexibility and even ethereality of online modes of communication. Though these remain only clues and are not developed further, they are important, especially because of the existing divide between the disciplines of cultural studies and political-economy studies in mainstream academe, created by the mutual hostility and benign neglect between these two extraordinarily important paradigms. Those who approach media studies by means of social theory and cultural studies remain largely indifferent to the role of capital and labour. Those who subscribe to the political economy approach, on the other hand, mostly remain detached from the cultural dimensions. In the context of intermedia, this divide robs us of possible ways of viewing information, of seeing it simultaneously as a cultural resource and a factor of production. This in turn keeps us ontologically and epistemologically constrained in addressing the interplay of power and counter-power, of hegemony and resistance, in intermedia today.

It is important to remember that be it communication studies, media studies or film studies, the points of intersection and dynamics of interplay of the two prime kinds of coevolution mentioned earlier have power at their core. Power is a complex element, and tends to slip away from the minds of analysts if it is addressed in a segmented way. This book does not explicitly deal with the power factor, but with intermedia and media ecology as its major preoccupation, it can be a reference point for intensifying the existing debate on the issue.

Because the clues mentioned above remain undeveloped, the cultural studies orientation takes over the language of the contributions. Unless this volume was meant only for a select group of ‘initiated’ readers, this acts as a constraint and limits the reach of the book. Cultural studies has contributed immensely to the understanding of many emergent dimensions, practices, codes, symbols, images and discourses of our time, shaking us out of our theoretical complacency, but the discipline’s centripetal discursive framework often alienate large sections (even) of informed readers, to say nothing of general audiences interested in understanding the complexities of mediatised society. While scholars have every right to subscribe to a particular paradigm and to contribute to a specific genre of discourse, they might also aspire to reach a broader audience if they are to encourage new perspectives and involve others in debating and transforming society. The point remains particularly relevant for a book which addresses our current media reality from some original vantage points.

Dipankar Sinha heads the Department of Political Science at the University of Calcutta.