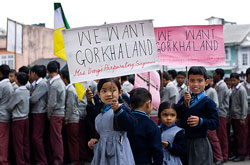 Some years ago, a friend from Calcutta, a veteran journalist who had covered the Gorkhaland agitations of the 1980s, had this to say about the relationship between the Gorkha National Liberation Front leader, Subhas Ghisingh, and the West Bengal government: “Jyoti Basu has given Ghisingh a long rope, so that he can hang himself.” Two and a half decades later, the brand-new political party in Darjeeling, the Gorkha Janmukti Morcha (GJMM), which has taken it upon itself to “give a new direction to the politics of Darjeeling”, vouches that the rope in question was handed over to Ghisingh not to hang himself, but to bundle up the entire Gorkha community and roll it down the Teesta. Working hand in glove with the West Bengal government, elections to the Darjeeling Gorkha Hill Council (DGHC) were repeatedly deferred, extending Ghisingh’s term as the sole administrative caretaker of the Council more than six times between March 2004 and March 2008.

The hills of Darjeeling are now preparing for the second Gorkhaland uprising, which the new leader, Bimal Gurung, has promised will be a “fight to the finish”. Battle lines have been drawn, as have the boundary lines of the prospective state of Gorkhaland. Demarcating the area of the proposed separate state, Morcha supporters have marched across the hills of Darjeeling and the plains of the Doars, garnering support and planting Morcha flags from the Mechi River in the west to the Sankosh in the east. Gurung has even gone so far as to prophesise that statehood would be attained by March 2010.

Claiming to have drawn inspiration from Mohandas K Gandhi’s Satyagraha movement, Gurung has maintained that, this time round, the movement would be a “democratic one”. An indefinite bandh was called in the Darjeeling Hills in late June, for the third time in the last four months. Two of these were to protest police atrocities against GJMM supporters (including students and ex-soldiers who had gathered for a peace rally in Siliguri), and one took place when the party was pressuring the state to make Ghisingh step down as caretaker administrator. The movement has been met with incredible resistance by the state government, leading to accusation of ‘high-handedness’ from several opposition leaders of West Bengal.

The crackdown comes against a backdrop of apprehensions in Calcutta about the ramifications of conceding a new state of Gorkhaland. The authorities have expressed fears that allowing such a step could ignite violence between the Bengalis in the plains and the Nepalis in the Darjeeling Hills. This fear, of course, proved unfounded in May, when Bimal Gurung held a public meeting in the outskirts Siliguri that a record 200,000 people attended. Rather, the state’s fear seems closer to the prospect of having Adivasis and Rajbangshis of the tea belt of the Doars rising up simultaneously. The Kamptapuri Progressive Party (KPP), for instance, has long demanded a separate state of Kamptapur. This community has remained a deprived lot, both in terms of economy and political representation, despite being the original inhabitants of the area.

The KPP has endorsed the Gorkhaland movement; and, with a sizeable chunk of the Nepali population residing in the Doars, this could be bad news for the West Bengal government. A ‘backward’ community from the Darjeeling Hills asking for a separate state for more than a century is one thing. But two additional communities joining hands in the Gorkhaland cause is quite another. At the behest of GJMM leader Roshan Giri, community leaders in nearby Jharkhand have been appealing to the Adivasi leaders in the Doars to support the demand for a separate Gorkha state. Giri’s past proximity to the All Bodo Students Union and the Jharkhand Students Union, many of whose members are now state ministers, is well known. Likewise, the government of Sikkim has now proposed placing the Gorkhaland demand before its own assembly, if such a request arises from the Hills. Sikkim has been particularly affected by the constant bandhs to the south, given that its only connection with the rest of India lies within Bimal Gurung’s stranglehold. The state stands to lose around INR 70 million every day of the shutdown.

Adding fuel to fire, the main Darjeeling Hills spokesperson for the West Bengal government, Asok Bhattacharya, who is also the state Urban Development Minister, has long drawn the ire of the Hills people by mouthing what the latter consider to be irresponsible statements. He has called Indian Nepalis “outsiders”, and suggested that the Gorkhaland movement has “outside links”, with his pointer obviously angling in the direction of the Maoist government-in-waiting in Nepal. Subhash Chakravorty, another state minister, has categorically called the Gorkhas “foreigners”, who should have been “ousted from the country along with the Britishers”. Such harsh statements have only reinforced the people’s resolve for a separate state.

An all-party meeting called by the state in mid-June to work out a political formula was boycotted by the Trinamool Congress, in protest against the state’s failure to include the GJMM in the talks. The GJMM has now refused to sit for a bipartite talk with the state. Instead, using the indefinite bandh as a pressure tactic, it has reiterated that any talk henceforth should be tripartite, with the Centre playing an important role. Bimal Gurung has even threatened to call back 60,000 Gorkhas from service in the Indian armed forces.

Time for talks
Where will it all lead? Anjan Dutta, the prominent Calcutta film producer, recently stated that when any democratic movement is stifled, there is always the risk of it turning undemocratic and violent. Bandhs certainly do not bode well, given that the region has three international boundaries and is strategically important as the ‘chicken’s neck’ gateway to the Northeast. The geo-political position of Darjeeling is such that neither the state nor the Centre can afford to take lightly any discontent in the area. The proximity of China, and its recent intrusions into the fingertip areas of Sikkim, are likewise worrisome for New Delhi. As such, dealing swiftly and effectively with discontent would certainly be in New Delhi’s interests.

During the Maoist movement in Nepal, there were genuine fears about ‘spillover’ in the contiguous areas of Darjeeling. People of this region have been witness to Maoist activities in the border district of Ilam, and all are cognisant of the 1900 km-long porous border between the two countries. It would be naïve to assume that the people of the Darjeeling Hills have remained unmoved by the phenomenal success of the Maoists. In recent years, the Maoist leader Pushpa Kamal Dahal (aka ‘Prachanda’) has evolved into an icon for youths throughout the area.

And yet, with the indefinite bandh slowly losing steam, and the Centre still not forthcoming with an invitation for talks, the GJMM now seems mired in something of a What next? phase. The Congress, which had earlier seemed sympathetic to the issue of Gorkhaland, now has other priorities, such as keeping the government together. It also would not want to further antagonise West Bengal’s already belligerent Left Front, a heavyweight in the United Progressive Alliance (UPA) government, which is already at loggerheads over the Indo-US nuclear deal. Against such a backdrop, unless Bimal Gurung quickly comes up with another political strategy, the movement runs the risk of losing steam. In the absence of any invitation for talks, the party is planning to head for New Delhi in the near future, in order to place its demands before the Congress leadership. There is a marked softening of stance taking place, and the West Bengal government will undoubtedly have noticed it.

As things stand, the Calcutta government has promised to offer anything short of a separate Gorkhaland in the name of development, but the GJMM has called for the dissolution of the Hill Council. But once the DGHC is dissolved, do the Hills, by default, revert to being just another district of West Bengal, having been stripped of whatever little power the Council previously enjoyed? What would happen to the more than 8000 DGHC employees? Will the Gorkhaland issue be a bargaining point between the Congress and the Communist Party of India (Marxist)? How will Bimal Gurung, who thus far lacks the people’s electoral mandate, negotiate with the state and the Centre on the hugely contentious issue of Gorkhaland, the proposed state?

There are far too many questions and too few answers, but it needs reminding that the demand for a separate state for the ‘Gorkhas’, first raised in 1907, is one of the oldest in the country. The contribution of the Nepali-speaking community towards the country as a whole cannot be undermined. The order of the day would be to call for a national debate, and search for a proper political solution. This is a highly emotive issue of identity, after all, and one that goes well beyond matters of development. A commonly heard refrain at the moment is, It has nothing to do with them; it has to do with us.

If proper treatment is not sought, this festering wound could turn septic. The power of the people, after all, whether proven by a referendum or not, can bring to its knees a ruling party – or even a monarchy. The people of the Darjeeling Hills certainly do not have to look far to see that.

~ Sharda Chhetri is a freelance writer and educationist based in Darjeeling.

The value of the raindrop: ‘Anil Agarwal reader’ edited by Pratap Pandey and Sunita Narain

Intrigue and backstabbing on the high seas

Competent authority vs. the press