We need more studies on media ownership in Southasia. 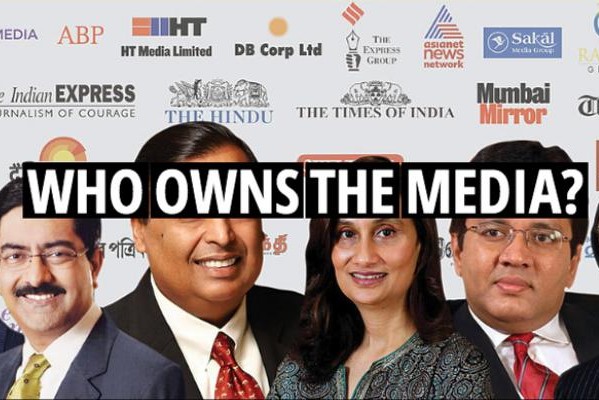 Chettria Patrakar was pleased to come across the Media Ownership Monitor (MOM) for India, recently published by Reporters Without Borders (RSF) in collaboration with Delhi-based DataLEADS. Compared to RSF’s marquee projects like the annual World Press Freedom index – an exercise that can be accused of oversimplification in its ranking of countries by ‘media freedom’ – the MOM projects offer a more granular analysis of media, with its focus on ownership structure and audience share. So, what does this study tell us about the Indian media?

The key takeaway is that despite its sheer scale – India’s media market is one of the largest in the world – “a small number of companies and conglomerates dominate the country’s media landscape.” This domination of large players is true in both ownership and audience share. In print media, for instance, between two and four newspapers have captured over 70 percent of the readership in English, Hindi, Bengali, Malayalam, Telugu, Punjabi and Gujarati language markets. Media monopoly is most prevalent in regional and vernacular media, where ownership is often concentrated in the hands of one or two players per region, many of whom have direct political involvement. The lack of plurality is most absolute in radio: only the state-owned All India Radio has the exclusive rights to produce news.

While the so-called national media – a descriptor casually applied to English- and Hindi-language news channels and newspapers most consumed in the metropolitan cities – has more players in the market, this hardly translates into diversity and independence of media narratives. In fact, even while the media landscape appears ‘over-legislated’ in many ways (especially the curbs on content), when it concerns cross-ownership and media concentration, the report says that the laws are “largely incoherent, unsystematic, insufficient and largely ineffective.” For instance, “there is no specific definition of media concentration in the existing legislations in India nor is the term defined specifically in terms of audience share, circulation, turn/over/revenue, share capital or voting rights.” As a result, the top eight media owners have over 70 percent of the audience share across all sectors. Some of India’s biggest media houses also have significant interests in other industries, and, as the report notes, particularly the real-estate business. The complex web of cross-ownership can often obscure such links between a particular media outlet and the owners’ other businesses.

For the wonks among us, some methodological details were as interesting as the report. For instance, most of the ownership data came from the Ministry of Corporate Affairs, available upon a payment of INR 100 (USD 1.44) per company. Audience figures are trickier, and rely on surveys (for print) and measurements made by an industry-funded organisation (for broadcast). The massive size of the Indian media market, however, introduces a serious challenge of sampling. There are over 17,000 registered dailies and more than 400 news channels in India, and the industry is growing in double digits. In contrast, 58 media organisations were investigated for the purposes of the report. The sampling is most problematic for digital publications, due to the absence of independently verifiable audience figures. Researchers on the project instead used website rankings by the analytics company Alexa, and Facebook and Twitter followers of news websites to arrive at their samples. As a result, the only significant addition to our existing knowledge of these digital publications is the breakdown of their ownership.

Shortcomings aside, CP looks forward to future media ownership reports, especially those on other countries in Southasia. A previous such study on Sri Lankan media found concentrated media ownership across all sectors – perhaps unsurprising given the much smaller size of the market. Like the Indian report, it also characterised the regulatory landscape as rich in controls on licensing and content, but light on financial transparency and cross-ownership laws. The project’s website says a report on Pakistan will be out soon, which may be revealing, given the multiple crises (including financial) that plagues the country’s mainstream media groups.