Why Southasia’s air is cleaner this Earth Day

Environmental gains for Southasia need not end when factories reopen. 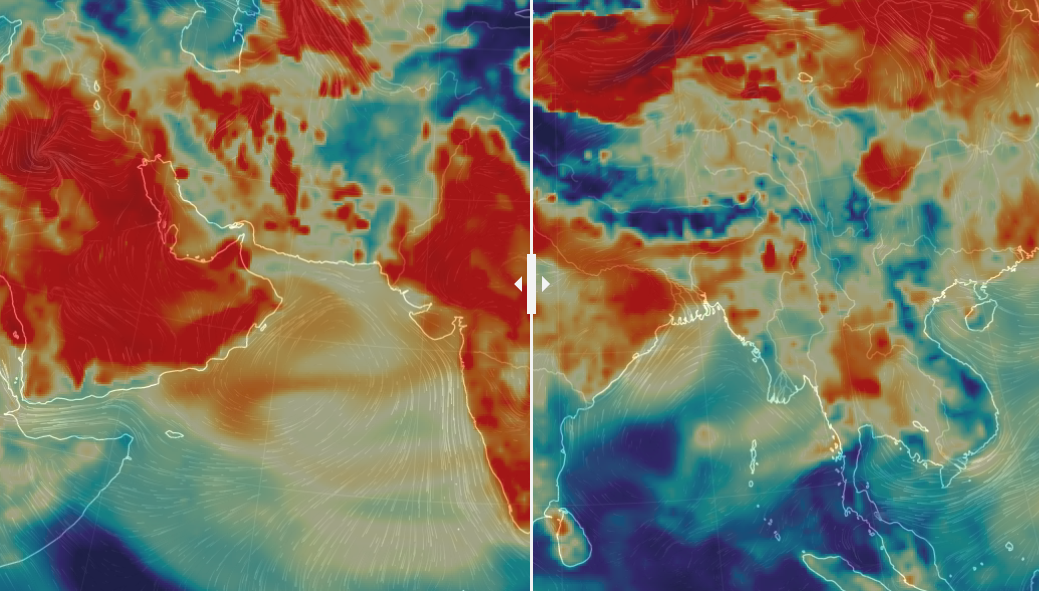 PM10 levels across Southasia between Thursday 18 April 2019 and Thursday 16 April 2020. Scroll down to slide between the before and after images.

In mid-March 2020, social-media posts began flagging the return of wildlife to public spaces deserted due to the spread of COVID-19. Swans, dolphins and elephants drunk on corn wine received millions of likes before being debunked. Footage of an endangered Malabar civet on a street in Kozhikode was shared over a thousand times before an Indian Forest Service officer pointed out it was actually a small Indian civet.

Although there was much discussion about the fake videos and the whimsical responses they triggered, the underlying issue they reflected – our desire to see a reduction in environmental harm – was not adequately discussed. The common intuition, that the air is cleaner, and the environment better off as a result of reduced economic activity, was rarely evaluated.

For Southasia, the impact of air pollution can be serious. According to a 2019 report by Swiss air quality technology company IQAir, cities in India, Pakistan and Bangladesh are among the most polluted in the world.

As governments imposed lockdowns and curfews to prevent the spread of COVID-19, there has been a noticeable impact on the environment.

The visualisation above shows a significant decrease of particulate matter (a mixture of solid particles and liquid droplets found in the air, formed due to chemical reactions between pollutants) since the lockdowns began. With most industries, as well as ground and air transportation (apart from essential services) at a standstill, Southasian air is noticeably cleaner.

Air traffic over Southasia on April 2019 vs April 2020 (Move the slider to see the change.)

Part of the reduction in air pollution may be due to the reduction in air traffic, with countries closing their borders to passenger flights. A thick cluster of planes over China corresponds to the country recently opening up after reductions in COVID-19 cases. Most of the air traffic over Southasia involved cargo flights or flights in transit to other destinations. Source: Flightradar24.com

Just as air traffic has reduced, so too has traffic on the ground. Google’s COVID-19 Community Mobility Reports, gleaned from those with location tracking enabled on their smartphones, show an overall reduction in the number of people visiting shops and outdoor spaces, workplaces, grocery stores, pharmacies and parks. Use of public transport has also reduced across the region. But a closer look reveals that not all countries have been impacted the same.

Afghanistan, which reported over a thousand COVID-19 cases as of 20 April 2020, showed a 38 percent reduction of visits to workplaces. Afghanistan only began imposing limits on people’s movements on 25 March, and the lockdowns have varied in terms of effectiveness.

In contrast, India saw a 64 percent drop in the number of people reporting to work. The government announced a lockdown on 24 March, which police officers enforced violently in several cities.

In Sri Lanka, 81 percent fewer people were visiting groceries and pharmacies, in part due to staggered curfews imposed by the government, with the number of curfew violators arrested in tens of thousands. The country has permitted door-to-door delivery of essentials and online delivery to facilitate limited movement.

A sharp downturn in real GDP over the next year across the region has been predicted by the World Bank, with Pakistan, Afghanistan, the Maldives and Sri Lanka expected to experience negative growth over 2020. The current moment presents an opportunity for governments in Southasia to rethink their energy priorities and explore investments in more sustainable and renewable energy sources, not least because Southasia is particularly vulnerable to the slow-building climate crisis.

The environmental gains for Southasia need not end when factories reopen.