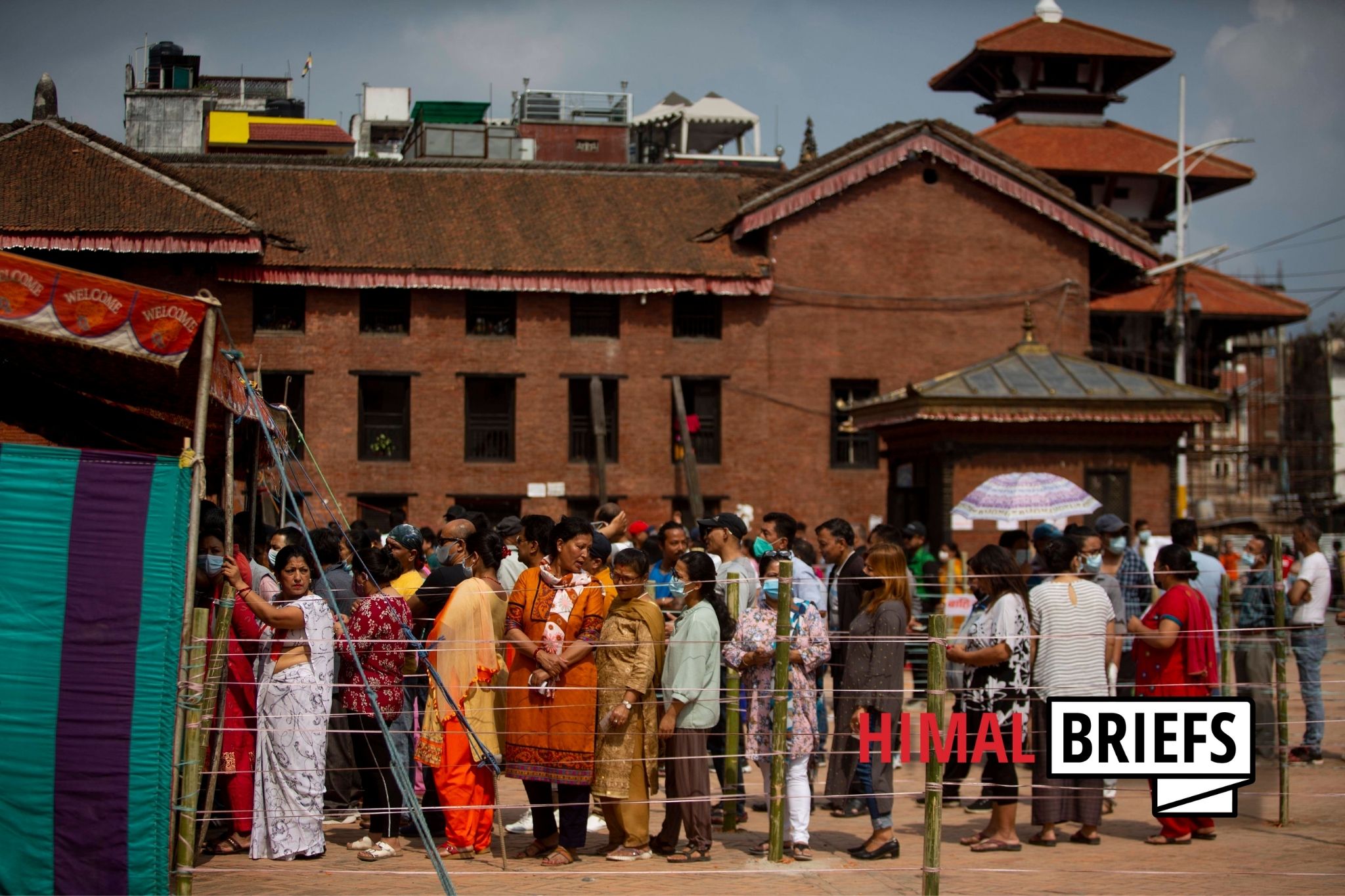 People line up to cast their ballots at a polling station during local elections in Kathmandu, Nepal, May 13, 2022. Photo: IMAGO / Xinhua.

For a garrulous man, Nepal’s former prime minister, and the current leader of opposition, Khadga Prasad Sharma Oli has been relatively quiet since the results of the local elections were declared. Before the polls were held on 13 May 2022, Oli had boasted that his Unified Marxist-Leninist (UML) party would win at least 60 to 70 percent of the 753 local government units across the country. His campaign was filled with characteristic barbs against the electoral coalition of the current ruling alliance in Kathmandu, that included the Nepali Congress (NC), the Maoists, and the Communist Party of Nepal (Unified Socialist), a breakaway UML faction. The sentiment was not surprising, as the latter two had splintered from the Oli-led parent party, Nepal Communist Party, to join their main rival – and also because the NC-led coalition’s campaign relentlessly insisted on the need to defeat UML to rescue democracy.

But as the counting comes to an end, the UML, the largest party in the Parliament, finds itself in second place. Led by Prime Minister Sher Bahadur Deuba – who had been severely criticised by many in his party after cobbling together an alliance with the two communist outfits – NC candidates have won 328 mayoral and municipal chief seats, while the UML has won 205 as of writing. Meanwhile, Oli’s party lost both the urban municipalities it had previously governed. Perhaps more significantly, the UML performed poorly in places that Oli – easily the most popular nationalist leader Nepal has seen in recent years – personally campaigned in.

Nepal’s second local elections after the promulgation of a new federal constitution in 2015 was relatively peaceful. At 64 percent, the voter turnout was significantly lower than that in the 2017 elections, when over 74 percent took to the booths. Rain was predicted across much of the country on the day of the polls. But that did not stop the old and the young who made their way to the polling booths from as early as 7 am, when voting began. In particular, the Nepali youth has proved a point in a polity where a 50-year-old is typically labelled a ‘youth leader’, both with their choices and their candidacies. As many as 42 percent of the elected representatives are below the age of 40. But that is not the big story.

In Kathmandu Metropolitan City, Nepal’s largest urban centre, a 32-year-old structural engineer and an independent candidate fighting his first election trumped seasoned contenders to win the mayor’s race and bring about the election’s biggest upset. Balen Shah – who made a name for himself in Nepal’s hip-hop circuit, and whose dark glasses and brown jacket have become a fashion statement – won on the back of a door-to-door and social-media campaign that challenged established parties on several fronts. Kathmandu’s younger population in particular has made a statement by voting for Balen. If one is to go by reports, their parents have joined in as well. Although one could argue that by choosing a foul-mouthed former mayor with multiple allegations of sexually harassing women, the UML had shown it was clueless about the capital’s changing demography – especially since its 29-year-old vice-mayoral candidate, who had been inducted into the party after she decided to run for mayor as an independent, won her race with a greater margin than that of Shah.

As formidable as Shah’s victory is, what should worry mainstream parties is the rise of the independent candidate across the country. In Dharan, the eastern city famous for its pork as much as its Gurkha lahures, long-time social activist Harkaraj Sampang Rai won on the back of a one-man election campaign. His first priority: to solve the drinking water crisis in a water-starved city. Independent candidates have won 13 local units, not significant at first glance, especially since some of the victors – like Manoj Kumar Sah in Janakpur sub-metropolitan unit, capital of Madhesh Province – stood in as candidates when their parent party – the NC in Sah’s case – refused them a ticket. But taken together with the prevailing discontent against political parties, this could hint at more non-party affiliated candidates throwing in their hats for the federal and provincial elections later this year.

Continued misgovernance by the larger parties – and the rise of independent candidates – means more Nepali voters could put their faith in individuals outside the party system if the choice is available to them.

Similarly, in Kailali District, in the country’s far-western plains, the Tharu-led Nagarik Unmukti Party (NUP) has won four out of 13 local units in the district, including in Tikapur municipality, where eight police officials and an infant were killed in violent protests against the 2015 constitution. Members of the Tharu community were accused of masterminding the violence, and the NUP leader and elected member of Parliament Resham Chaudhary is currently in prison for the same. NUP’s victory makes a case for marginalised groups and communities to organise themselves into a political unit and defeat larger parties within their regions of dominance.

One can also draw a measure of hope from the victory of an all-Dalit independent team winning four out of five seats in a ward, Nepal’s smallest unit of governance, in the western hill district of Jumla. And although election rule amendments allowed parties to get away with fewer women candidates this time around, Nepal has seen a slight increase in the number of women representatives – 14,402 – than the previous election – 14,352.

While a section of the Nepali voter prefers to elect officials within their kin and clan networks, anti-incumbency remains the flavour this election season, with both the largest parties NC and UML bearing the brunt of its effects. Oli’s monopoly over candidate selection in his party, and the resultant intra-party feud, cannot be discounted as a factor for the UML’s losses. In Pokhara, for instance, a section of UML voters cross-voted for the new mayor to retaliate against the party’s candidate.

The victories in these elections must have invigorated Prime Minister Deuba, who backed the electoral alliance despite misgivings within his party. Deuba will have put any contention to his leadership to rest for now, especially since the NC finds itself in the lead position going into the general elections. With the Maoists in third place, Pushpa Kamal Dahal Prachanda’s party has re-emerged as a formidable political force that can make or break ruling coalitions. But the fickle nature of Nepali politics means there is no certainty the current alliance will continue into the general elections.

Meanwhile, continued misgovernance by the larger parties – and the rise of independent candidates – means more Nepali voters could put their faith in individuals outside the party system if the choice is available to them. Traditional parties will now have to show themselves responsive to voter concerns, including in candidate selection – or diffuse such challenges by co-opting or neutralising new threats to their electoral base. The next six months will tell how parties choose to respond.

Amish Raj Mulmi is the author of ‘All Roads Lead North: Nepal’s Turn to China’ (2021). His writings have appeared in Al Jazeera, Roads and Kingdoms and Mint Lounge, among others. He is a consulting editor at Writer’s Side Literary Agency. Amish covers Nepal as a regular contributor to Himal Briefs.