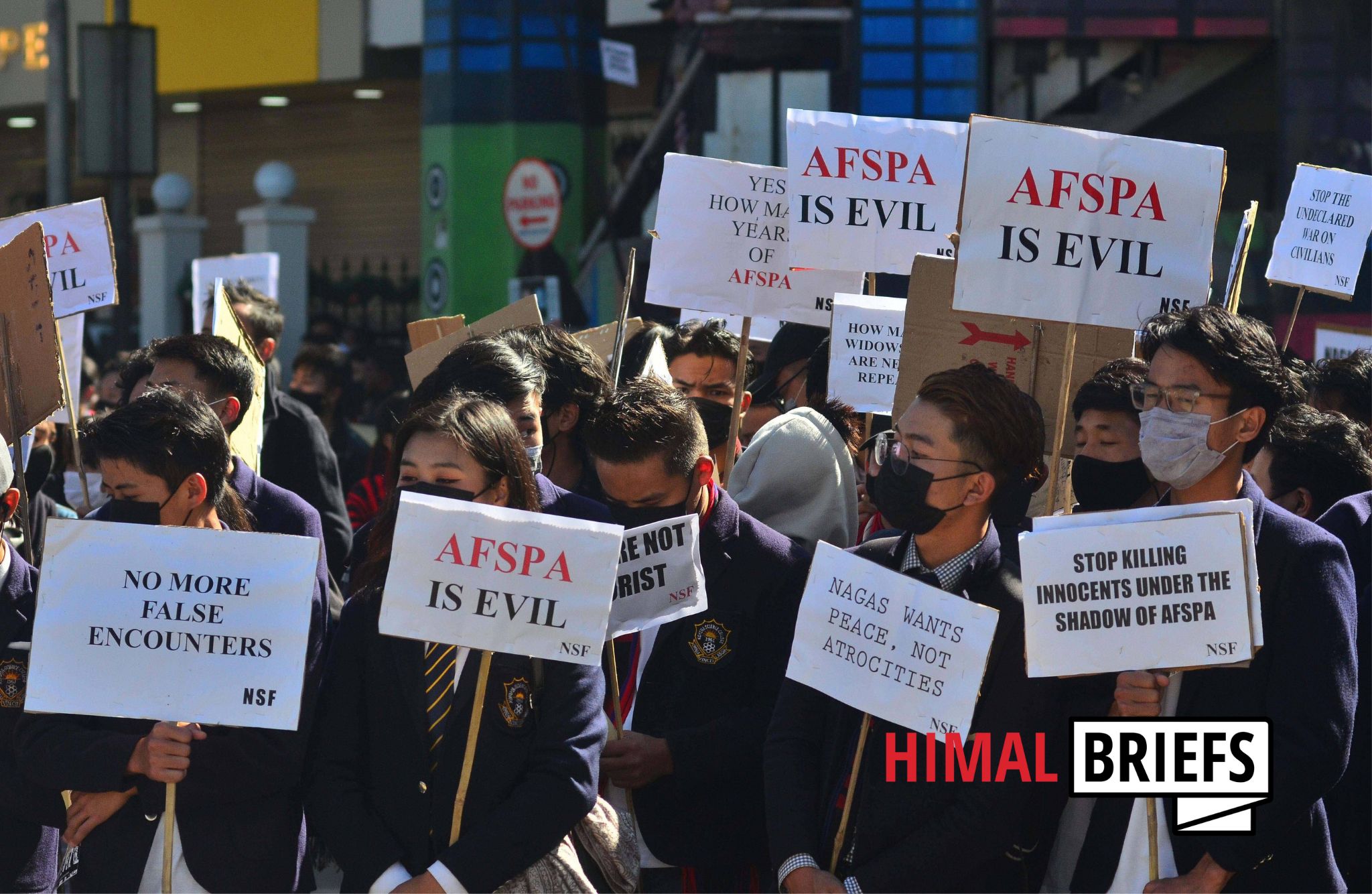 On 4 April 2022, S Phangnon Konyak took oath as a member of the Rajya Sabha, making her the first woman from the Northeast Indian state of Nagaland in the upper house of the Parliament. This was days after another historic ruling, where several parts of Assam, Manipur and Nagaland were no longer characterised as ‘disturbed areas’, pushing them out of the ambit of the Armed Forces Special Powers Act (AFSPA). The Act is infamous for giving unbridled powers to the army and central security forces to search, arrest or shoot anyone in a ‘disturbed area’ on mere suspicion, and has long been a bone of contention in the Northeast and India-administered Kashmir.

Phangnon, who has been the Nagaland president of the Bharatiya Janata Party (BJP) Mahila Morcha for some years, belongs to Oting village in Mon district, where 14 civilians were gunned down by the ‘21 Para Special Forces’ of the Indian Army in a December 2021 operation, based on faulty intelligence inputs. The Special Forces personnel initially shot dead six villagers (and grievously injured two) returning from a coal mine, due to, in the words of India’s home minister, Amit Shah, “a case of mistaken identity.” Seven more locals died in a second round of firing, which the army claimed was done in “self defence” (a soldier died in the retaliatory attack by locals). The witnesses said the firing was unprovoked.

The day Phangnon was sworn in, the Konyak Union (KU), the apex body of the Konyak Naga community back home in Mon, announced that it would abstain from attending the consultative meeting proposed by the state government on AFSPA. The civil-society body remains steadfast in its decision to boycott any ‘national event celebration’ and not cooperate with the country’s armed forces till justice is served. Justice for the union, its vice president Honang Konyak told me, did not stop at compensation for the bereaved families. “Our demand is for the repeal of AFSPA, and for the security personnel from the Oting incident to be tried in civilian courts,” he said. “Simply ex gratia is not enough.”

BJP’s era of “peace” in the Northeast

Meanwhile, the BJP – which currently leads the government at the centre and is a coalition partner in Nagaland – has unabashedly claimed credit for both the AFSPA removal as well as Phangnon’s election to the upper house. The BJP government in New Delhi boasts of a 74 percent reduction in militancy activities in 2021 compared to 2014, when the central power shifted from the Indian National Congress vanguard into the hands of the Hindu nationalist party that espouses ‘one nation one constitution’. By then, however, the region had already stabilised with most of the insurgent armed groups in the region having signed the Suspension of Operation (SoO) agreement.

Narendra Modi’s government also liberally takes credit for the surrender of over 7000 militants, the conclusion of peace accords with the Bodo and Karbi militants, the settling of 37,000 Bru-Reang internally displaced persons in Tripura, and for addressing the border issues between Assam and Meghalaya. These are milestone developments, no doubt, and to add to it, the curb in militancy has naturally paved the way for infrastructural development – whether bridges, underpasses or airports – and growth, most notably seen with burgeoning tourism, festivals and local entrepreneurship.

However, one cannot help but notice the stark omission of the framework agreement signed in 2015 towards a political solution for the Nagas. Thuingaleng Muivah, the key negotiator leading the talks and the general secretary of the National Socialist Council of Nagalim (NSCN-IM), has repeatedly accused New Delhi of “going back on its word” after recognising the “unique history and situation of the Nagas”, most recently at the Unrepresented Nations and Peoples Organisation (UNPO) general assembly in March 2022. According to him, the agreement stated that “Nagas and Indians will coexist as two entities sharing sovereign power which will be defined in the competencies”.

The BJP may be sincerely pushing for stability, seeing the untapped potential for trade and industrial extraction of the Northeast’s natural resources. But the party is ultimately caught between its brand of election-driven divisive politics and the centre’s agenda of integrating the region with the rest of India. Temporarily, the BJP might win favour, as seen in state election victories, by drumming up ethno-nationalist politics in the region through the proposed National Register of Citizens (NRC) in every state. But at the same time, they are reigniting ethnic fault lines and old hegemonies. The bitter battle over the state boundary between Assam and Mizoram, for example, in which six Assam Police personnel were killed, is inextricably linked to the territorial chest thumping that the two state leaders displayed on social media.

In Assam, the passing of the Citizenship Amendment Act, 2019 (CAA) not only further ghettoised its Bengali Hindus, but also led to a flare up between some Tripuri communities, including the settled Brus and Reangs, and the local Bengali Hindus. The groups were angered by the naturalisation of the Bengali residents, whose citizenship they called into question, while the latter were upset by the centre’s move to resettle these communities, instead wanting them to return to Mizoram (from where they were forced to leave).

In this complicated mess, the BJP and their strategists have either used inducements or leveraged old skeletons in the closet to balance the scale of politics. But how long this will work remains to be seen in a region where not only is the idea of being an ‘Indian’ shaky, but the same could be argued for any collective identity as Naga, Assamese, Kuki or even, ‘Northeast’ – and how easily these identities interact with each other.

Take for instance, in Manipur, the removal of AFSPA from most parts of the valley widened the rift between the hill tribe communities and the dominant Meiteis in the plains. This surprised many observers, considering the hill insurgent groups are currently in a suspension-of-operation agreement and engaged in political talks with the government, unlike the valley-based groups.

Seilin Haokip, spokesperson for the Kuki National Organisation during talks with the United People’s Front, said that lifting AFSPA shows that insurgents are no longer located in the valley. She asked, “But could someone provide a plausible rationale for government’s seemingly ‘discriminatory’ decision, separating hill and valley?”

No history of sanctions

With the decline in counter-insurgency operations and killings of militants, several parts of the region were primed to be rid of AFSPA, as has been the case in prior years in the state of Meghalaya. Where the BJP can become a party of difference (as  they prematurely claim to be) is by granting sanctions for trial in civilian courts.

In 2016, India’s Supreme Court clearly stated that “there is no concept of absolute immunity from trial”, and the following year it ordered the Central Bureau of Investigation to look into 97 cases of alleged extrajudicial executions by armed forces personnel in Manipur. In the Oting operation, the Indian Army actually admitted their mistake, unlike in past incidents. Considering intent is key to determining the extent of the crime and its punishment, the case must be tried in a civilian court for fair and transparent proceedings. How the BJP government responds to requests for sanction will be the true test of them “winning hearts and minds’ in the region. But at the moment, there are no encouraging signs.

Babloo Loitongbam, a Manipur based human-rights lawyer who led the Extrajudicial Executions Victims Families Association to file a public-interest litigation based on the 1528 cases between 1979 and 2012, said that the CBI filed 31 final reports of the 39 incidents (85 deaths) they investigated. “The CBI has found armed forces as the accused in six cases but despite their requests, the central ministry hasn’t given sanction for a single case since the last two years,” he told me days after the Oting incident, when protests broke out across the region renewing the demand for repeal of AFSPA. “This is after the SC intervention and the CBI – their most trusted investigating agency – establishing that SF were involved in the murder of civilians,” added Babloo, anticipating that sanctions against the accused in the Oting operation might end up the same.

The situation is no better even when their own leaders have come close to being killed, and despite the BJP being in power in these states. Nyawang Konyak, the BJP district chief in Mon, who alleged that the same paratroopers fired at his party when they reached the spot, said the SIT never even approached him to get his side of the story. His nephew and driver were badly injured in the firing while his neighbour succumbed to his injuries in the vehicle, which had the party flag hoisted on it. “We are demanding for the troopers to be tried in civilian courts,” he told me, adding, “as well as compensation for those injured in the attacks”

Meanwhile, when asked if they would consider going to court for justice, KU Vice President Honang said the union is closely watching the state government’s next moves. “If the system prevails, we won’t be able to control the outcome.” In the past, he told me, their ancestors may have accepted army atrocities as a way of life. After years of peace, a relationship of trust had developed between the locals and the armed forces. “But now the trust is broken,” he said, unsure if it would ever mend, especially when justice seems elusive. Be that as it may, he said, the community was adamant about keeping the issue alive. “We won’t let the present and future generations meet the same fate as our grandfathers had faced”.

Makepeace Sitlhou is an independent journalist covering India’s Northeast for several national and international publications. Makepeace covers India's Northeast as a regular contributor to Himal Briefs. She can be reached at @makesyoucakes on Twitter.